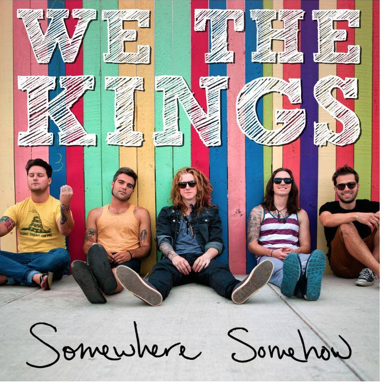 In my everlasting quest to discover new artists and music, I stumbled upon We the Kings, who just released their fourth album titled “Somewhere, Somehow”. Their cover graced the front page of iTunes’ new releases tab, so I decided to check them out.

Initially, the band seemed like any other alternative group out there. I was unimpressed with the repetitive lyrics and usual rhythms. However, after listening to their album on repeat, the songs grew on me. The songs are upbeat and fun, even if they are predictable. Most songs are about love or heartbreak (as if there aren’t enough songs about that), so the album isn’t necessarily Earth-shattering and innovative, but I found it very enjoyable. Sometimes all you need is some upbeat songs to make a good album.

An excellent example of this is the first song on the album is “Queen of Hearts.” It’s a catchy melody that evokes a smiling face. One lyric that made me smile above the rest was when lead singer Travis Clark belts out “We could rule the world, Own everything, I’ll be the Jay-Z, You’ll be the B.” The reference to Jay-Z and Beyonce especially amused me as, coincidentally, the same week this album was released, Beyonce released her own surprise album.

A vocally impressive tune was “Just Keep Breathing”. There are very few lyrics, but plenty of instrumental and singing of “woah” and “oh.” Although there is no lyrical depth, I felt myself swayed by the music and vocals. Often times, too much focus is put on the lyrics and you forget about the music, so it’s refreshing to have a song that relies mostly on the instruments and melodies.

Perhaps not quite so upbeat is “Sad Song” featuring Elena Coats. The voices of Clark and Coats so easily complimented one another, you’d think they had been singing together for years. It’s truly the best song on the album, captivating listeners with the intro piano solo. Again, it’s a song about love and heartbreak, so nothing new, but with the beautiful piano and the harmonizing of Coats and Clark, the song makes a lasting impression.

Although this album is predictable, and I initially thought I would never like it, the songs became enjoyable. It’s always nice to hear songs that can lift your spirits, especially in frigid and grey December. So I give a thumbs up to We the Kings for brightening my day.

Have you listened to the album? Which of the songs do you like best?