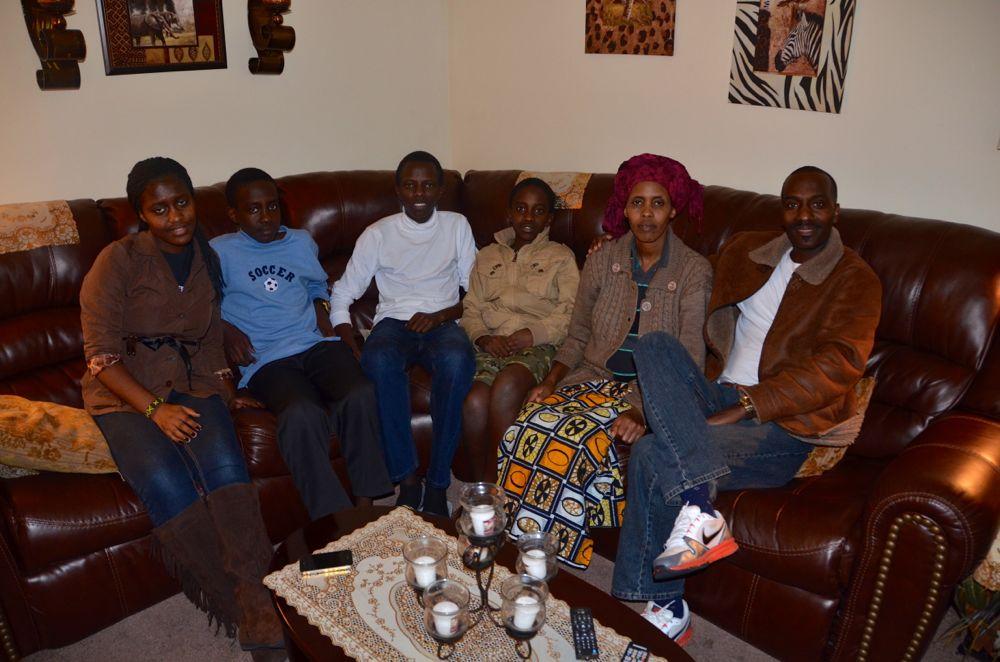 From Left: Aline, Kwizi, Claude, Freddy, Francine, and Nene Rwenyaguza together in their Columbia home. Photo by Urmila Kutikkad

Violence has ravaged weary Congo for decades. 5.4 million dead, another 2 million displaced, an estimated ongoing 45,000 deaths per month  — and that’s since 1998 alone. There is no shortage of tragic numbers; they swarm and suffocate until they’ve snuffed out whatever soft, not-so-silver lining of human element remained within themselves, until they’re nothing more than absentminded numbers devoid of meaning.

It’s within that soft lining of human element that the beauty lies. The pain, too, but the beauty especially. It lies teeming in the millions upon millions of stories that, in some thorny patchwork of hope and tragedy, comprise the one, underwhelming number that people instead see.

In August, five of these stories came to Columbia to join a sixth. In true character, their seams are sewn with a profound beauty.

The stories start in Congo, in the midst of a war between tribes: The Rwandan Hutu and the Congolese Tutsi, who are simple Christian farmers. The Hutu have been attacking the Tutsi since the Rwandan genocide spilled into Congo, and one grim night in 2002, the Hutu raid Nene Rwenyaguza’s Congolese village.

“I was born into the war in Congo. Even my mother was taken hostage — they attacked our village and they take my mom when I was born and they took her in a forest, three years,” Nene said. “One night, after I had three kids, they came to attack our village. I ran to one side and my wife and kids ran to the other side, because they would kill us. They would take us over.”

Armed with guns, the Hutu seize cattle and goats and sheep and set fire to Nene’s village, his life. With the ensuing chaos and suffocating dark muffling his senses, he thinks his family is dead, and his family thinks he’s dead. The knowledge of death makes the separation not just physical, but mental as well. Once the family is driven apart in 2002, it will take 11 years to be reunited.

Nene, with nothing but his Bible, fled to Kenya. His wife, Francine, and his three children Aline, Freddy, and Kwizi, as well as a son, Claude, who Francine had adopted, remained in the forests of Congo.

They lived this tense, drifting lifestyle for years, only fleeing to Kenya in 2008, the same year that Nene left. Nene had been struggling to make ends meet by preaching and praying in Nairobi, Kenya for six years.

“It was very hard. I was living in a camp and going to theology school,” Nene said. “I had no money to pay for school. I was praying because there was no future for me. To pay it was hard, to eat it was very hard.”

[pullquote]This story is the first in a three-part series, in which BearingNews reporters take a closer look at the stories of students’ transitions and journeys into American life. Check back on Friday for Part Two. [/pullquote]But Nene’s perseverance paid off when, in 2008, the UN gave him the opportunity to move to America. Though he’d been told that everyone in his Congo village — his family included — had died, he still held some improbable fragment of hope that they were still alive, and was therefore reluctant to move to a different continent. In the face of the destitute quality of life he was facing in Kenya, however, he decided to take the opportunity.

Neither Claude nor Aline nor Nene are able to fully answer when asked what the moment was like when they first found out their family was whole again. A smile splits their faces and they are struck breathless. When they speak, their voices are hushed with gratitude.

“I was crying,” Claude said. “It was like a dream, a dream coming true.”

“Oh my gosh, I can’t tell you how much we were like, ‘you are lying.’ Aline said. “Oh, I cried. I didn’t know him because I was young when he went, but to see him in the picture…” she trails off.

“Oh, it was a miracle,” Nene said. “In our country, we believe in Jesus. We pray. And we say maybe they’re alive and if we die, we say we meet in heaven. But the day I found out, I was happy. To think or to hear the news that they were alive was a miracle.”

Perhaps more difficult than finding out that his family was alive, however, was the wait that followed. Though Nene found out in 2009, it would be 2013 before his family would step onto American soil, before they could be a tangible presence in his life.

“It was very hard, very hard … they tell me to go do a DNA test, I did that, and after that I was waiting around four years,” Nene said. “Only praying, sometimes no eating. Sometimes you’re trying to pass the night, just thinking about family. It was hard waiting for them. Everybody said they were alive but even coming to America was hard, and it was very hard, but God was helping me.”

During the four years of trudging wait, Nene worked multiple jobs to help support his family in Kenya, paying for housing, food, school and everything in between. Meanwhile, his family, living in a UN refugee camp, was struggling against arduous bureaucracy to come to America.

“In order to get here we had to go through a lot of interviews,” Claude said. “Several times they refused when we were about to come, they said no, that we had to do another interview again, so we had to stand all over again. We got four years doing all that. Then in 2013, July, they called us and told us that we are going to come here; it was the happiest moment. We came here on August 18th. We left Kenya on Tuesday, then we reached America Thursday, it was three days on the airplane. Oh man, we were happy when we reached here.”

Nene had waited 11 years to be reunited with his family. When his family finally came to America; however, it all happened very suddenly, and it was undeniably worth it.

“By grace of God, one day they call me, [and they say] ‘after two weeks, your family will be here,’ Nene said. “I was taking off for two weeks with them. When I was by myself, sometimes I don’t eat and sleep, but now we talk; I’m happy to be with them.”

Now the family is settled in America and Claude, 16, and Aline, also 16, attend Rock Bridge. Claude likes soccer and the fizziness of American soda and the education system and the overabundance of food (he says his family’s been eating too much food.) Aline likes to sing, and she especially likes the people here.

“What I like in America,” Aline said, “is that people love each other and people go to school and you are safe everywhere. Sometimes even when we are eating in the house, sometimes our father will tell us that sometimes he was sitting in the house, the only one, and he couldn’t eat, but now we are one family and we love each other and we love people in America”

Nene, who is a pastor for Africans in the First Baptist Church and works a cleaning job at the Boone County National Bank, has been in America for a handful of years now, but the rest of his family has only been here for a paltry five months. 11 years apart nonwithstanding, Nene has bright hopes for his future, his family’s future and most importantly, spending the rest of his life with his family.

“My future. I like it. My future is to preach gospel, and to help some people in Africa whose fathers have died, whose mothers have died, who have HIV. In my future, I help those people, I pray for them. One day, I may even preach in English. I hope my kids can learn. Maybe some of them will become doctors, another pastor like me,” Nene said, beaming. “I cannot say I won’t go to work, but every time I want to sit with them or to talk. If I look at them or they look at me, we are happy. It’s good to be with my family right now. Every time I feel I’m happy.”

The Rwenyaguza family keeps a treasured scrapbook. Its pages are lined with worn pictures and newspaper clippings detailing the family’s long journey to being reunited. Photos by Amy Blevins