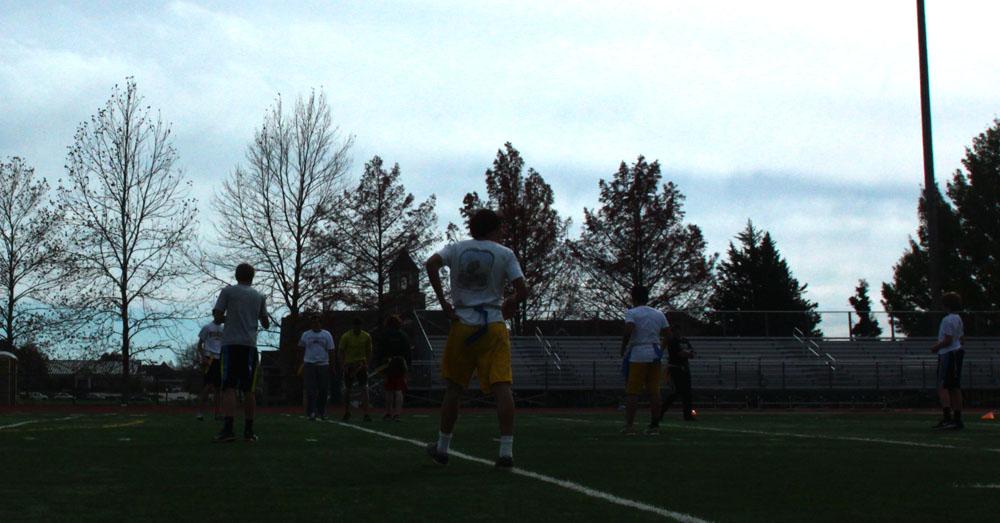 A Men's Team Sports class plays flag football on Friday. Physical Education classes such as this one create environments for exercise. Photo by Asa Lory

Despite the national Let’s Move campaign spearheaded by first lady Michelle Obama, recent data suggest teens may not be buying into the fitness hype.

Among 12 to 15 year olds in the United States, only one in four participate in the recommended hour or more of moderate to vigorous physical activity each day, according to results from the 2012 Youth Fitness Survey.

The survey questioned 800 kids across the country regarding their exercise habits and performed physical examinations on the same children. Further results from the survey will be released in the future, including treadmill tests performed by the youth participants.

Sophomore Brendan Fish says the drop in physical activity among younger teens may be a result of our increasingly modern world.

“To me, [the results of the study] make sense with all the new technology and everybody’s just kind of slacking on exercise,” Fish said. “A lot of kids, especially in that age range, are being influenced to not exactly eat the healthiest things and not exercise if they’re not involved in sports.”

If our younger generations remains inactive, Fish said, this could pose a problem to the future youth of our country. He said the problem could potentially be solved with the help of parents and educators promoting physical fitness in young kids.

“I don’t really see a lot of kids that age motivated to exercise; It’s definitely a problem and it will affect future generations,” Fish said. “I think we could fix it by influencing teens and kids in that age range to get more involved in sports and be more active.”