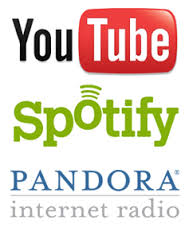 The Internet can sometimes be a scary place; chock full of people like The Craigslist Killer and Hunter Moore, you must stay on your cyber tiptoes at all times and pray to the deity of your choice that you don’t trigger World War Three (queue Matthew Broderick in WarGames).

The World Wide Web serves a different purpose for everyone, whether it be answering questions, business or even just playing games. But while those uses are all well and good, the one shared by most is listening to music.

From what I can gather, many people in the world (myself included) would prefer to get something for free rather than pay for it, especially when it comes to music. There are ways of doing said task, piracy being one.

But if you, like me, have already gotten a spanking from Mediacom, it’s best to take a look at the legal options.

It goes without saying that everyone has a different preference. There will always be some cool website buried in the depths of the Internet that will let you play music you like in some way superior to the more popular basic choices.

Here are the pros and cons of several more popular methods of free listening to music online, each of which I used for seven days in order to get a good idea of each option.

1: Pandora
Founded in the year 2000, Pandora has been grandfathered into this list as a payment of homage. The site brings back memories of a simpler time, back when Justin Bieber was beloved and Egypt wasn’t in the toilet. I remember hearing about Pandora and thinking it was the coolest thing ever. Radio on the internet? To me, it was a greater achievement for mankind than the invention of the wheel. Little did I know, that as I began the week long trial, soon I would come to despise what I once loved. I thought it would be fun to relive my middle school years, creating stations to listen to, pressing the “thumbs up” icon when a song I liked came on. I was overcome with nostalgia. But I only made it two days into the week before I remembered something important: I hate listening to the radio, regardless if it is online or not.
I only want to listen to music that I like, not music I must tolerate. At first I would simply skip over the song if I didn’t care for it, making sure to hit the “thumbs down” icon as well, but I remembered another fatal flaw in Pandora; you only get six skips. This is the point where I reference that meme saying, “Ain’t nobody got time for that!”
Eventually you learn to cherish those skips, comparable to three wishes given by a genie; you don’t want a single one of them to go to waste. But if you waste them anyway, you have to live with the consequences of listening to music that you don’t like. And that is not a risk that I, in my cowardice, am willing to take.

2: YouTube
Before this week-long trial, the only times I have ever listened to music on YouTube have been when I cannot find it on any other online medium for music. After you’re done listening to one song, you have to rack your brains, thinking about what song you want to listen to next, go as far as to type that song into the search bar, all far too taxing on myself. Sound quality also poses a problem, I don’t know where in the world some of the people on YouTube downloaded their MP3s from, but they sound as if they are being played from a stereo so ancient that it belongs in the Smithsonian. Sometimes you will get lucky, however, and find perfect quality audio. But, this is hit or miss.

3: Spotify
To put it simply, Spotify is the reincarnation of Napster; only without the cat logo. Despite the occasional commercial breaks that the free version comes with, Spotify is a pretty solid way to listen to music online. Although it is an application downloaded onto your computer, you still need an Internet connection to use Spotify. However, you also have the option of downloading playlists onto your computer for when you don’t have Internet.
When I started using Spotify, my biggest worry was whether or not there would be a decent selection of music. Much like iTunes, many programs similar to Spotify lure users in with promises of endless pages of tracks, only to be stuck with live versions. But I was definitely satisfied with the overall accommodations Spotify made for it’s users. Their selection was broad and wide enough for me to find artists I already love and to discover new artists. Not to mention that it was an easily accessible way for me to enjoy my music from any computer I was at.
In conclusion, the levels of fondness I have for certain online music services are not meant to make other’s decisions for them. I strongly suggest that anyone interested in this topic should find out what works best for them and not take my word for anything said earlier in this piece.Online music is becoming more popular over time, especially because it’s free and easy to access. Perhaps this signals our society’s technological progression and moving towards replacing much of the radio and CD usage.