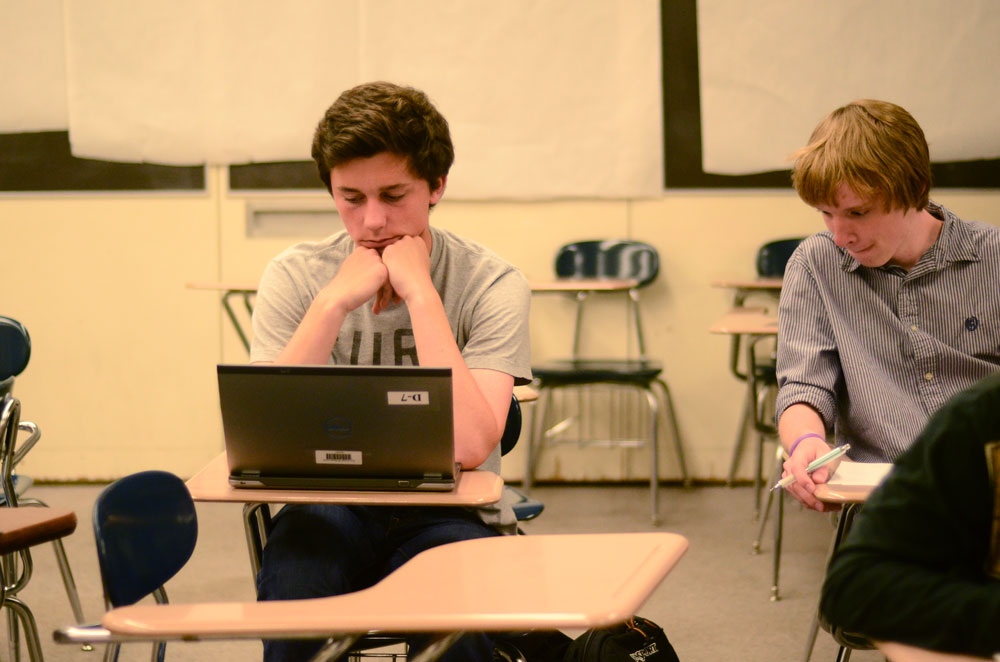 Many students spent their two week long winter break carefree, glad to be home to enjoy novelties of sleeping in and not having to do homework. These students generally relaxed during the first few weeks back to school, because all of first semester’s grades were out of sight and out of mind; they used the break to relieve them from the stress of school and all of its worries of next semester.

However, this was not the case for junior Paul Van Hove, who spent his break worrying about how his grades would turn out. He said he was unsatisfied with the “performance evaluations” from the previous semester.

Many have heard the phrase, “There is always room for improvement.” This quote pertains particularly well to sophomore Quinn Miller, who, while he did do well during the first semester, said he believes he could have performed better.

“There were a couple classes that I didn’t have an A in so I think I probably could have worked harder to do that … I could have studied to do slightly better on tests to improve my letter grade.”

-Paul Van Hove[/pullquote]Miller also feels that a pass-fail system could be successful, though he didn’t come to this conclusion purely on his own. He was partially influenced by his Advanced Placement World Studies teachers, Neil Blackburn and Katherine Sasser.

“Blackburn and Sasser talked about it before, how grades could be eliminated and [instead] it would just be ACT scores. [Grades] wouldn’t be needed but it would be difficult to make that change to so many schools,” Miller said, “but I feel that the current system holds students to a higher standard.”

After 13 years in the educational system, senior Justice Stoffer said she doesn’t feel as though society views students with lower passing grades and students with failing grades fairly or equally. She also feels as though a pass-fail system would be fairer to students, just as Van Hove does.

“I think we should just have pass or fail, I don’t think we should have a [percentage based grade],” Stoffer said. “I also feel as though I would be more comfortable to divulge my grades if it were a pass-fail system.”

Just as when a person is bullied and begins to feel that the cruel things said about them are true, when a student is constantly told they don’t care about their grades, eventually, they won’t according to www.ascd.org. The stereotypes of these students can become truths, and their future becomes bleaker with every report card. This continues in a downward spiral and drives students further and further apart as the flourishing students continue to flourish, especially in comparison, as the failing students continue to succumb to the societal assumptions.

“I think they should be kicked out of school because they don’t take school seriously and we don’t have room for failures in our nice school,” junior David Goudy said. “Like, people who fail easy classes or even have D’s, I just think it’s a waste of time to try to educate them.”

One might think that the answer would entertain such advanced psychoanalytic jargon and terminology that the average person could not possibly come up with such a solution, but in fact simple steps such as building relationships with your students helps creates more care and drive in students, as well as a reform for education.

These include more group cohesion, as students don’t see other students as competitors to see who has the better grades. One will also note that students will likely take more academic risks, and take more challenging classes due to the fact that the more challenging class will not wreak havoc on a Grade Point Average, but will create an intellectual stimulant that will possibly allow them to learn better, which is near how students who take AP classes speak about their experiences.

“We read an article about seven years ago. It’s called Degrading to D-Grading, and that completely changed my idea of what I thought grades were. I think that they are completely subjective, there is no such thing as an objective grade, there is no thing as an objective standardized test,” fellows mentor and former AP world studies teacher David Graham said. “None of that stuff is serving the purpose that it should. It drives a wedge between students, and it drives a wedge between students and teachers. It’s not an accurate reflection of what a person is or can do, and so to me they’re pointless, I’d just as soon never give another grade ever again.”