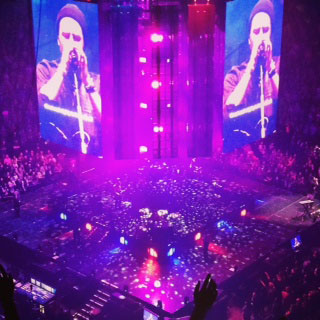 One building, 21,000 hands raised and voices lifted, all praising the name of One. Surrounded by 21,000 other believers in Jesus Christ, all in the same mindset, ready to glorify the King, I discovered something huge and unexplainable.

Once every year, the Passion conference brings together thousands of college-age students with the mission to bring them closer to God. What makes this event so appealing and worthwhile to penny-pinching college students is that they will get to experience the biggest names in Christian music and ministry.

This year the conference featured big name artists such as Chris Tomlin, Kristian Stanfill, Matt Redman, Crowder, Hillsong United and many more. To any Christian music fan, it would be a dream to worship with all of these well-known people in one building. Not only that, but this event includes speakers such as Louie Giglio and Francis Chan, who have been spreading the Gospel their entire lives and have a heart for reaching out to this upcoming generation.

Passion obviously wasn’t just another concert. My family would never drive 10 hours just to see an artist, no matter how great. Our trip from Columbia to Atlanta, GA wasn’t provoked solely by our Christian music fandom, but we were looking for an event that was life-changing. And I can’t describe it as anything other than that.

Our generation can change the world.

I know it’s cliché, but what I believe after this weekend is the cliché is true. Seeing thousands of young people united under one message reminded me how powerful we can be when we come together.

We heard the story of a woman imprisoned for trying to bring Bibles into Iran and was eventually exiled. A Muslim who converted to Christianity, she was looking to spread her life-changing message of Christianity to those living around her. We were reminded just how lucky we are to live in America where we have freedom of religion because in other countries, such as Iran, even possessing a Bible is illegal.

Buckets were passed and I heard the resounding clanking of change and bills; we were paving a way for the message of the Bible to be heard globally. The 21,000 of us were motivated and focused on a cause raised more than $335,000.

Our gift will supply aid in printing, binding and sending over 33,500 bibles into this nation that has a severe shortage of the Word of God.

Throughout the weekend, the people I was attending the concert with and I were able to get pretty impressive seats, take great photos of the artists and have an awesome view of the stage itself. However, when we came into the last session we were running behind and were forced to sit in the upper section, furthest away from the stage.

Though these aren’t normally the most prized seats, this was my favorite seat throughout the whole conference because I was able to look out and see the entire crowd.
There are no words to describe what it feels like to look out and see 21,000 people singing, eyes closed in awe of the words being sung. I think the movement was from the soul, not something I can describe with words.

There came a point in the evening when the worship had faded and it came to a slow instrumental session. A girl sitting a couple seats down from me was obviously moved by the experience, and though the worship session had ceased, she continued singing. At most places, she would receive disgusted looks or create whispers among those around her, but not here. She did get a few looks, but she didn’t care, she was all in and fully connected to the intimate worship she was experiencing with her Savior.

I commend her for her bravery, that when surrounded by a crowd full of strangers, she was not hindered in her personal moment.

All 21,000 of us left the building hearing the same messages and same songs; however, I believe that we all left on 21,000 different missions. The movement that started within all of us started in an arena in Atlanta, but will ripple outward all across the world. I know now that even though my voice is small, over time, it could create a ripple larger than I can even imagine.

Cartoons promote individuality instead of relationships

This is such an amazing story! I hope that one day, I am able to come to a meeting such as this and experience the same thing that you did in Atlanta. It does sound truly uplifting and inspiring.