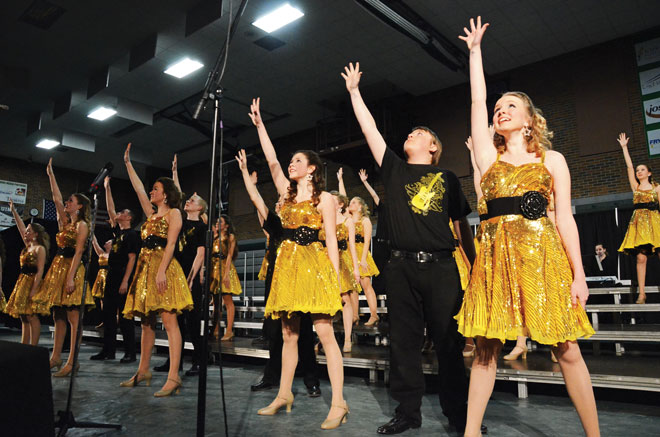 After missing what was scheduled to be their first competition due to inclement weather, show choirs Satin ‘n Lace and City Lights gear up for their benefit tonight, Feb. 13, featuring RBHS alumna and 2013 Miss Missouri Shelby Ringdahl. Ringdahl plans to sing with her former choir once again.

With their missing competition, show choirs require more practice in hopes of doing well in the season to come. Choir director Mike Pierson goes in with high hopes for the former high-placing shows.

“It’s really just continuing what we’ve been doing,” Pierson said. “Building on [our successes] just comes from the events themselves and watching other choirs there who are scoring higher than we are. It gives them something to aspire to and to work toward.”

While having a history of success can benefit a program, the weight of keeping the tradition alive falls on the shoulders of returning students like senior Jon Crader, who have high hopes going into this year’s competition field since many of last year’s participants still do show choir this year.

“We have strong performers and strong singers for this year’s show choir and we have sharpened up those who are returning,” Crader said. “We have taught the new students, first year performers basically what we’ve been taught before. We hope to keep the same win streak going.”

Although show choir only attends nationals every other year because of a shared budget between choir and show choir, the motivation for these competitions stay the same. The drive to achieve comes from many sources, whether it be through Pierson, friends or within the singers themselves.

“You can’t really avoid [being motivated]. It’s kind of contagious in a sense. Once it starts it’s infectious when competitions start to come around. You know that it’s coming up, you’ve been working for so long and so hard that it’s time to show what we’ve done,” Crader said. “I think [our excitement] kind of starts with Pierson to remind us to start getting up and getting ready and then we sort of psych each other up for it because we finally get to compete.”

To keep his students motivated, Pierson uses various methods to make his show choirs ready for the competitions soon to come. Like any leader, Pierson and his students have unique forms of communication.

“I tend to scream compliments at them and try to find a way to reconnect them to that drive,” Pierson said. “We have to sometimes provide videos of other choirs and taking them to competitions and even ahead of that saying, you have a performance coming up this week, here’s what you need to be thinking about. That kind of thing.”

For senior City Lights member Haley Benson, the possibility of winning Grand Champion at competitions seems obtainable and exciting with this year’s ensemble, even without the motivation of going to as prestigious a competition as Nationals.

“We always want to do well and win Grand Champion at each and every competition, Nationals really just gives up a lot more excitement during practice and during performance; each time we perform during those years is just one more rehearsal before Nationals,” Benson said. “On the years without it, we just focus more on the smaller competitions. Towards the middle of the year, during crunch time, most of us kind of lose that motivation so its really Pierson that gets us into higher gear and makes us performance ready.”

Have you seen any of the show choir performances? What did you think?

Show Choir has always done great and they did amazing at the Carthridge Competition!