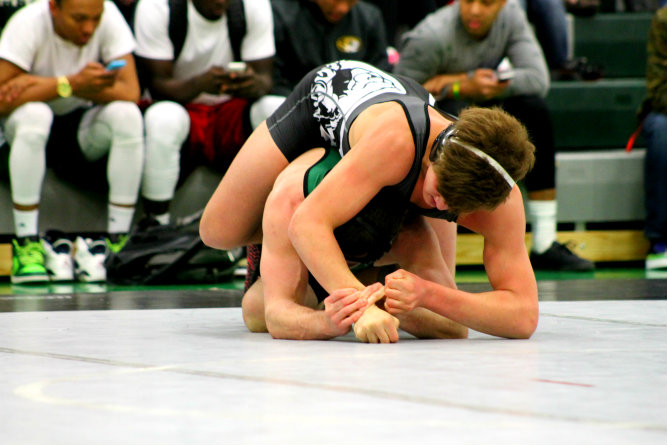 Rock Bridge Bruins face off the Centralia Panthers on Jan. 13.

Entering the heavyweight finals matches, the RBHS Bruins wrestling team’s hopes of winning a team district title hung in the air. Earlier in the day the Bruins had advanced six wrestlers to the championship bout of their respective weight class. Behind the surge of semifinal advancement points they were able to take over first place.

Through the finals matches Jefferson City and Waynesville continued to cut the deficit. In the 170 pounds final Jefferson City picked up a pin from sophomore Jalen Martin to bring the Jays neck and neck with the Bruins. In the 195-pound final Waynesville picked up a 7-2 victory from Joseph Bradford to bring all three teams within 1.5 points of each other.

Entering the heavyweight championship bouts the Bruins needed both Jacob Semple of Waynesville to lose in the championship match and Jeff City’s Logan Coil to lose in the third place match. Coil received an injury default over Joplin’s Phillip Reitz clinching the team title for the Jays with 154 points.

The Bruins still hoped to finish second but Waynesville’s Semple pulled out an 8-7 decision to secure a second place finish for Waynesville with 151 points. The Bruins settled for third with 150.5 points.

At 106 pounds Davis wrestled an outstanding tournament. After receiving a first round bye, Davis lost in sudden victory overtime 3-1 to freshman Dennis Barnes of Jefferson City. Davis came storming back through the consolation side of the bracket recording two pins on his way to the win or go home, consolation semi-final. In the bubble match Davis notched a last second 3-2 decision over sophomore Miles Robinson of Ray-Pec. In the match for third place Davis again squared off with Barnes and in the rematch recorded a 4-1 decision.

At 113 pounds Kline pinned his way to the finals recording falls against Zachary Benge of Jefferson City and Charles McNeal of Waynesville. In the finals Kline pulled out a 3-1 victory over previously unbeaten Alec Hagan of Eureka.

At 132 pounds for the Bruins Smith recorded two falls before earning a decision over Jeff City’s Jacob Brune, 5-2 in the semifinals. Smith met Lee Summit West’s Austin Eveler in the final. Earlier in the year at the Lee Summit Christmas Invitational Eveler bested Smith 8-5. This time around Smith prevailed in a dominant 7-3 decision.

At 138 pounds Kiehne major decisioned Ray-Pec’s Grant Ardito 11-1 in the quarterfinal bout.  In the semifinal Kiehne powered his way to a 7-3 victory over Lee Summit West’s Jake Woods. In the final Kiehne wrestled Nixa’s Joe Velliquette, currently ranked 18th in the nation by Flowrestling. Despite a strong showing Kiehne dropped the match against Velliquette 4-0.

Senior Jason Kiehne went into the weekend with no concerns and one goal: to win. His strategy for the tournament was just to stick to what he was good at, he said. Kiehne’s strengths lie in his flexibility and his ability to persevere and not get fatigued. This tournament marked a special year for RBHS wrestlers.

“Well,” Kiehne said, “we set the record for most people sent to state.”

At 145 pounds Crane recorded a fall in the quarter final bout and a technical fall in the semifinal bout before meeting Jefferson City sophomore Logan Moriarity in the finals. The pair has wrestled twice this year, splitting the outcomes,  Moriarity won a close decision when the Bruins dualed Jeff City and Crane defeated Moriarity in the finals of the Hickman tournament. Crane won the rubber match in the series winning 4-0 claiming his fourth straight district title.

At 152 pounds Ratermann recorded a first period fall in the quarter finals and then a tough 4-1 decision over Ben Schroeder of Eureka to advance to the finals. In the finals Ratermann fell to Lee Summit West’s DJ Brasfield-Thogerson 4-3.

At 182 pounds Maly pinned every opponent he faced. Maly took on senior Andrew Erxleben of Northwest Cedar Hill in the finals, a rematch of last years finals that saw Maly pin Erxleben in little over 40 seconds. This time around it would take a little longer but in the end the result was the same with Maly recording a fall at four minutes and 41 seconds.

With seven wrestlers advancing to the State tournament, the team had a great weekend. Coach Travis Craig said in preparation for districts, the team trained exceptionally hard the three to four weeks leading up to the tournament, but laid off the week before, giving the wrestler’s bodies time to heal.

“This year we we’re concerned that our guys had had too big of a layoff from their last competition until districts,” Craig said. “Our last tournament of the year got snowed out as well as our last dual so we had an over two week lay off before districts.”

The Bruins’ goal for districts was to come back strong and wrestle with confidence – to not hold back. And they definitely didn’t. In the final round of the tournament, the Bruins beat three wrestlers they had lost to in the previous year.

“For the state tournament we’ll go over more of the specific situation that we know the guys will be in during their matches that could make a big difference between winning and losing,” Craig said. “We’ll also focus on getting the guys mentally focused and prepared.”

By Graham Ratermann and Trisha Chaudhary

The state tournament begins this Thursday at Mizzou Arena.

(Written by Ashleigh Atasoy) When's she's not spewing sarcastic nonsense or making gutteral noises to entertain herself and scare others, Trisha's probably hanging out with her friends, shopping, or watching "He's Just Not That Into You" for the 30th time--which is to her, a girl's best friend. But under her hard exterior, deep down there is a frozen jelly bean of a heart, which she claims has a molten, butterbeer flavored interior. For a straight shot to this frigid jelly bean, buy her a scarf, or better yet make a Harry Potter reference. To contact Trisha, send an email to tchaudhary@bearingnews.org.