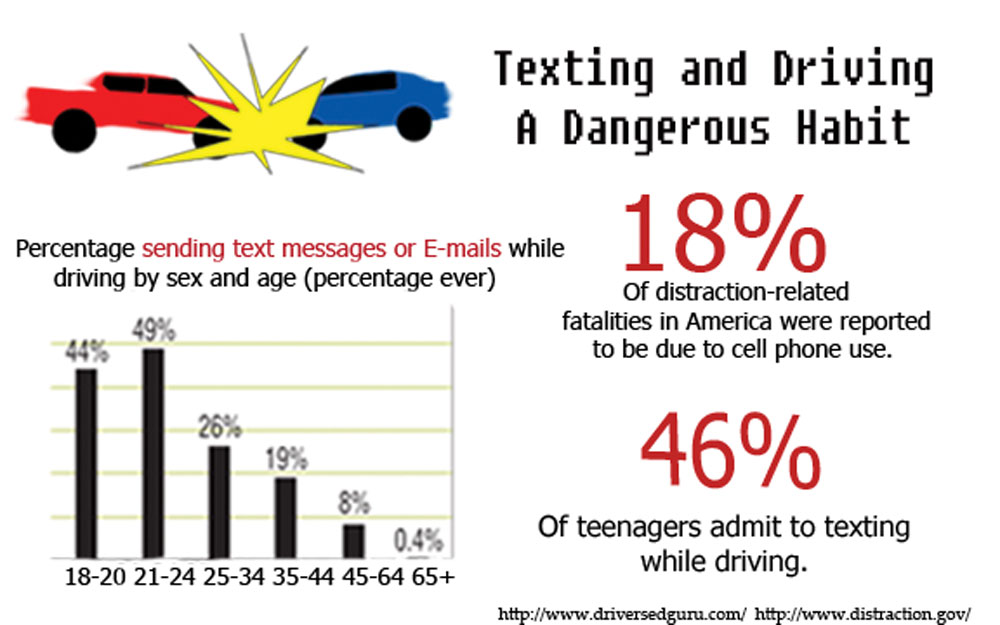 Turn on the television or drive down the interstate, and it isn’t hard to find an advertisement pleading with those who care to look up to pay attention to driving. AT&T, a national leader in providing phone service, has their now famous “It can wait” campaign, complete with the tragic testimonies of everyday Americans who have made the mistake of focusing on their latest text instead of the on-coming road.

Likewise, departments of transportation use roadside billboards to remind drivers of the dangers of texting while behind the wheel.

Corporations such as AT&T have spent millions trying to influence drivers to put away the phones and spend their time concentrating on the task at hand. The campaigns are impressively similar to those that try and prevent driving under the influence. RBHS physics teacher Kory Kaufman agrees with this claim that texting and driving is as dangerous, if not even more so, than driving drunk.

“When you compare it to drinking,” Kaufman said, “obviously drunk driving also delays reaction time and it physically slows down and impairs your reaction time. You may not be physically impaired when you’re texting, but you are reducing that reaction time because you’re not able to react to a situation like you should.”

According to distraction.gov, the United States’ official website for distracted driving, manual, visual and cognitive distractions can influence drivers. Because answering a cell phone or text message requires a person to engage their hands, eyes and mind, combining all three types of distractions makes cell phone use while driving have the most potential for danger.

Senior Gage Cheslock, a student who, like many of his peers, both owns a phone and operates a vehicle, agrees with Kaufman on the similarities of drinking and driving versus texting and driving. Both activities, Cheslock said, cause concerns.

Yet how equal are they? In 2012, using a cell phone accounted for 600 motor vehicle deaths in the country, which is 18 percent of all distraction related driving fatalities. That same year, drunk drivers caused nearly 10,322 deaths on the roadways of the U.S. These numbers are nearly opposites and don’t hold true to the equal dangers that texting and driving under the influence are said to produce.

Just last spring, the four major mobile carriers (AT&T, Sprint, Verizon and T-Mobile) committed to spending multi-millions a year to make the public aware of the dangers of using their devices while on the road.

On the contrary, the U.S. government devoted 10 times that amount, about 50 million last year, to agencies like Moms Against Drunk Driving.

Kaufman thinks both campaigns hold little weight anyway. The money spent, he believes, isn’t doing quite what personal experiences could in terms of persuading drivers to pay attention.

“The most effective advertising is either something that happens to them personally or a close friend,” Kaufman said “If someone is in a serious accident and it’s because they were texting and driving or drinking and driving, I think that has more of an effect than watching an ad.”

Should drinking and driving or texting and driving result in the death of another person, the penalty is arrest. However, in the state of Missouri, being caught driving under the influence warrants arrest whereas being stopped while operating a cell phone behind the wheel will result with, at most, a ticket and the driver will be slapped with a fine.

Cheslock believes the answer for these inequalities should be an increase in the penalty for texting and driving.

“I think they should balance [the penalties] out,” Cheslock said “The penalty for drinking and driving is harsh, but I think it’s justified. But for texting and driving, I don’t think they’re cracking down as hard because you basically get a ticket and pay it off. There’s no lasting effect.”

Equality aside, texting while driving grew as a problem throughout the past decade. Companies and federal agencies produced prevention methods over televisions and roadways in a short period of time.

“Unfortunately there are more and more people texting and driving, and people who are using phones and it’s definitely a distraction while you drive,” Kaufman said. “Whether or not government enforcement is the answer or public awareness is, I think that it’s got to be a combination of both.”

Brayden is a first year staff member, yet is fully enjoying being the co-sports editor of both The Rock and BearingNews. Aside from journalism, Brayden starts at Offensive Tackle for the Bruin football team and plays saxophone in the Emerald Regiment. Most importantly, he loves God, family, and friends! Contact him a bparker@bearingnews.org.

Being a new driver I fully understand the danger of texting while driving. Kids feel like nothing can hurt them and don’t think of the long term affects. It only takes one glance at your phone to cause a crash. Texting and driving is never worth it in the end.