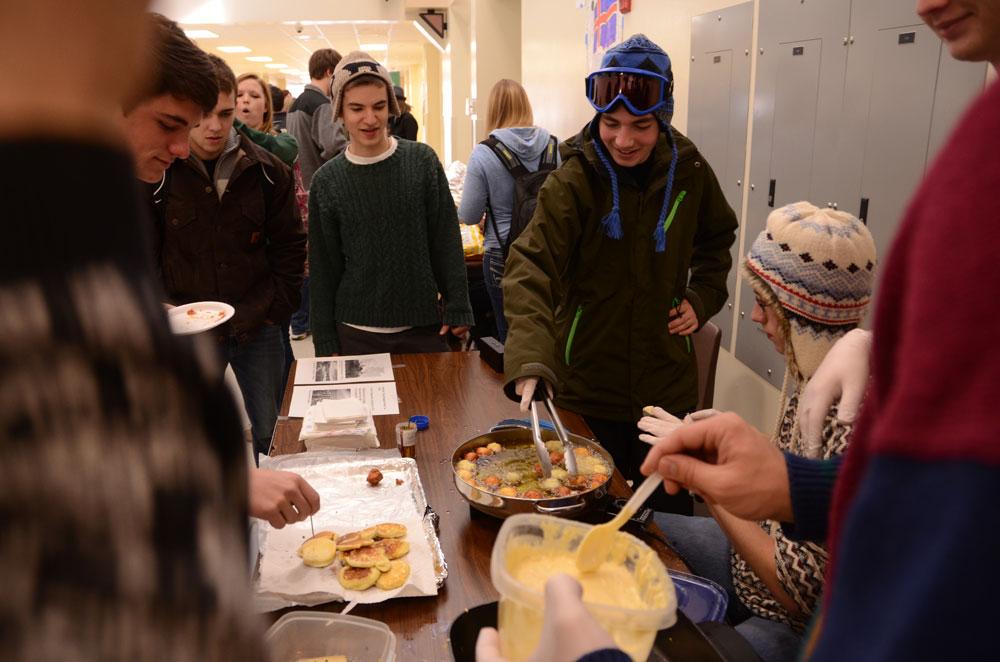 The normal walls of RBHS peeked out in small spots, behind the vast amount of flags, decorations, people and booths set up in anticipation for the annual Global Village event on the morning of  Friday, March 7.

Tables with an assortment of food, music and costumes lined the halls of the commons and the main hallways on the south end of school, with dozens of countries and cultures represented by dedicated and proud students representing their heritage.

Seniors Raymond Majors and Madison Boyken set up a booth for Russia, both of whom were born there and were adopted into the U.S.  Their booth had Russian tea cakes which originated in 19th century Russia, and had Russian music playing out of a speaker.

“Our goals were to just have fun and to give people a little taste of our culture,” Majors said. “I think Madison and I really enjoyed having the freedom to just let people know our connection to Russia, and we enjoyed seeing everyone and giving away our food.”

Not all students represented their culture in their booths, many students in clubs, particularly language clubs, did booths for their language’s country. Sophomore Sarah Kinney is a Latin student and member of Junior Classical League, which is related to Latin. Kinney participated in an Ancient Rome booth put together by members of JCL.

“I feel like not many people at Rock Bridge are aware of the club and I wanted to spread the word of what the club can do,” Kinney said. “Also, I wanted to display some of the MOJCL award-winning artwork.”

Global Village was organized through the activities’ office, and run by a student committee that reviewed the applications for booths. Assistant Principal David Bones was the overseer of this committee, with limited intervention.

“We have an application process, and we’ll review all of the applicants,” Bones said. “We want to ensure that students are genuine and sincere in their efforts to try to represent a certain culture.”

While Bones believes that many students most enjoy wandering the halls in pursuit of the best international foods, there is much effort put into the booths by the people that are proud of their countries of origin and want to showcase them to RBHS.

“I think that many students really care about the food,” Bones said. “But I think that they also are entranced by that kind of ‘Aha!’ moment where they walk around and can’t believe that RBHS contains this many cultures represented by the students. I also see a lot of pride in the students who put up their booths, displaying a lot of artifacts, representations of their cultures and heritage.”

Majors appreciates the diverse aspects of Global Village where truly the whole world is represented in the school.

“Global Village is so special because it really brings the whole school together, and we see how diverse our students are from each other,” Majors said. “We get to experience a little about how these cultures work. I think it’s great that our school can host something this tremendous.”

What was your favorite part of Global Village?

Apps of the week: JOOL, Grid and SAT Up