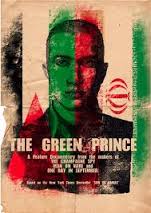 I saw The Green Prince accidently, but it ended up being one of my favorites of the festival, as these things usually happen.

The film details the extraordinary account of Mosab Hassan Yousef, a Palestinian living in the West Bank. His father is Sheikh Hassan Yousef, a founder and leader of Hamas, the Palestinian and increasingly militant Islamist organization. Raised in this environment, Mosab is vehemently anti-Israel and, at the age of 17, is arrested by Shin Bet, Israel’s security service, for smuggling guns.

Though still overcome by Israeli hatred at first, Mosab gradually becomes disillusioned with Hamas while in prison. Their brutal, dispassionate tactics horrify him, and eventually, he agrees to become a spy for Israel in the effort to save lives against Hamas’ violence.

The film goes into depth about a lot of the specifics of Mosab’s time with Shin Bet, but what makes the film so stunning is the human element. Though Mosab knows he is doing a good thing, he is, at the end of the day, betraying his father, his family, his culture. He is stabbing everyone he loves in the back, and this is a truth he must live with every single day for a decade.

Not only that, but he has no illusions about the fact that the Shin Bet is not his friend. He is an invaluable source for them and he stays on because he believes it is the right thing to do, but they still distrust him, treat him more like an enemy than a friend. The only person who reaches out to him is his Shin Bet handler, Gonen, who eventually gets fired for his compassion towards Mosab.

After a decade, Mosab is forced to flee to America due to pressing safety concerns, and he believes he can start a better, happier life there. Finally, he is forced to tell his father who he really is, resting his faith in the love he and his family have for each other. Instead, his father immediately renounces him and Mosab is left entirely alone in America. Furthermore, though he tries to seek political asylum in America, the government doesn’t believe he is safe because of the guns he tried to smuggle at the age of 17, regardless of all the work he did for the American side for ten years after that.

Facing deportation, Mosab turns to the Shin Bet. The most heartbreaking part of the film comes as Mosab breaks down, recalling how the people who he had helped and seen every day for ten years, couldn’t be bothered. It was Gonen who came to his rescue, coming to America and speaking out for Mosab, proving a bond greater than anything blood could have forged.

Though the movie can drag at times and leave you wondering where it’s going, when everything starts coming together towards the end, the film has the power to move mountains. As Mosab comes to realize in the hardest imaginable way, it’s not about one side or the other. He tells us, life should be about creating bonds, not destroying them. At the end of the day, that’s what will matter. The message is invaluable, and The Green Prince delivers it with stunning unconventionality and grace.