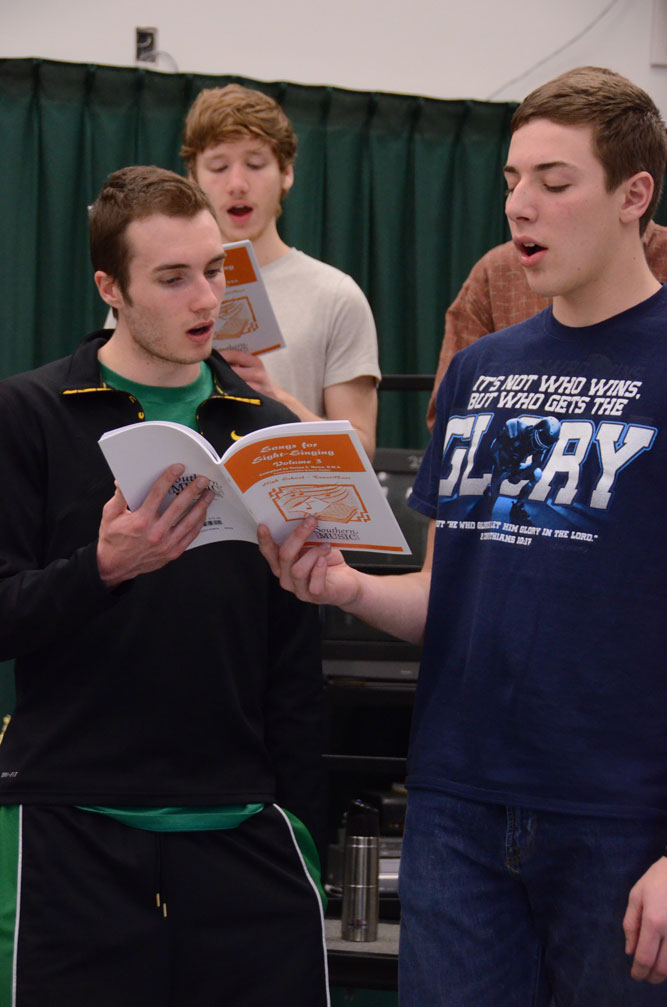 Mens Chorus rehearses site reading in class before competition in April. Site singing counts towards the overall score of an ensemble at competition; Mens Chorus received top scores out of combination from their site singing and outstanding performances. Photo by Maribeth Eiken

On Friday, Apr. 4, the RBHS musical ensembles traveled to Mexico, Mo. for its annual music festival. At the festival, Sophomore Hannah Chen, who plays the violin, played in the large ensemble division as part of the RBHS Chamber Orchestra, said that the Chamber Orchestra received a rating of one on a scale of one to five, with one being the highest.

“We are really happy to have gotten a good rating,” Chen said. “But now it’s back to practicing, so that hopefully we can perform even better at state.”

On Saturday, Apr. 5, some musicians returned to Mexico for the small ensemble division. Chen was one of those students, playing a duet with freshman Amy Gu. Chen and Gu received a one rating as well. Chen said that they felt that they performed well, and are proud of their rating.

“We were very excited to perform,” Chen said. “When we first started the piece, we were a bit nervous, but a few measures in we really got into the music and forgot all about the competition and judging. It was just us listening to each other and the music.”

The RBHS Band Ensembles also made the trip to Mexico. Freshman Daniel Shi, who plays percussion, said that he thought that all of the bands played well, getting mostly ones for their performances. Shi said that this experience has helped him develop as a musician.

“I am more comfortable performing for judges in the future,” Shi said,  “and my confidence was boosted by the experience.”

Likewise, the RBHS Choir Ensembles journeyed north to participate in the festival. Junior Vaughn Mueller, who sings for the Men’s Chorus, said that the choirs all sang very well, all getting one ratings. Mueller said that he has been attending the festival for several years and thinks that it is a fun experience.

“I have done these festivals for several years now, so I am used to the professionalism and confidence needed for these performances,” Mueller said. “It’s not about individual performance, it’s much more about being part of a whole and doing your best to make the voices sound like one.”

The Ugly Duckling becomes a swan one last time, putting forth ageless appeal

As a performer, I felt like RBHS choirs were very successful! I felt well prepared and confident in our music. I’m so glad I have the opportunity to participate in such a great program at Rock Bridge!

It’s crazy how good our performing arts students are here at Rock Bridge, our show choir being ranked 14th nationally, and the music ensembles qualifying for mexico, we are truly surrounded by talented people

I went to Mexico for the first time as a violinist at Districts and was also happy with our performance. It was a totally new experience!