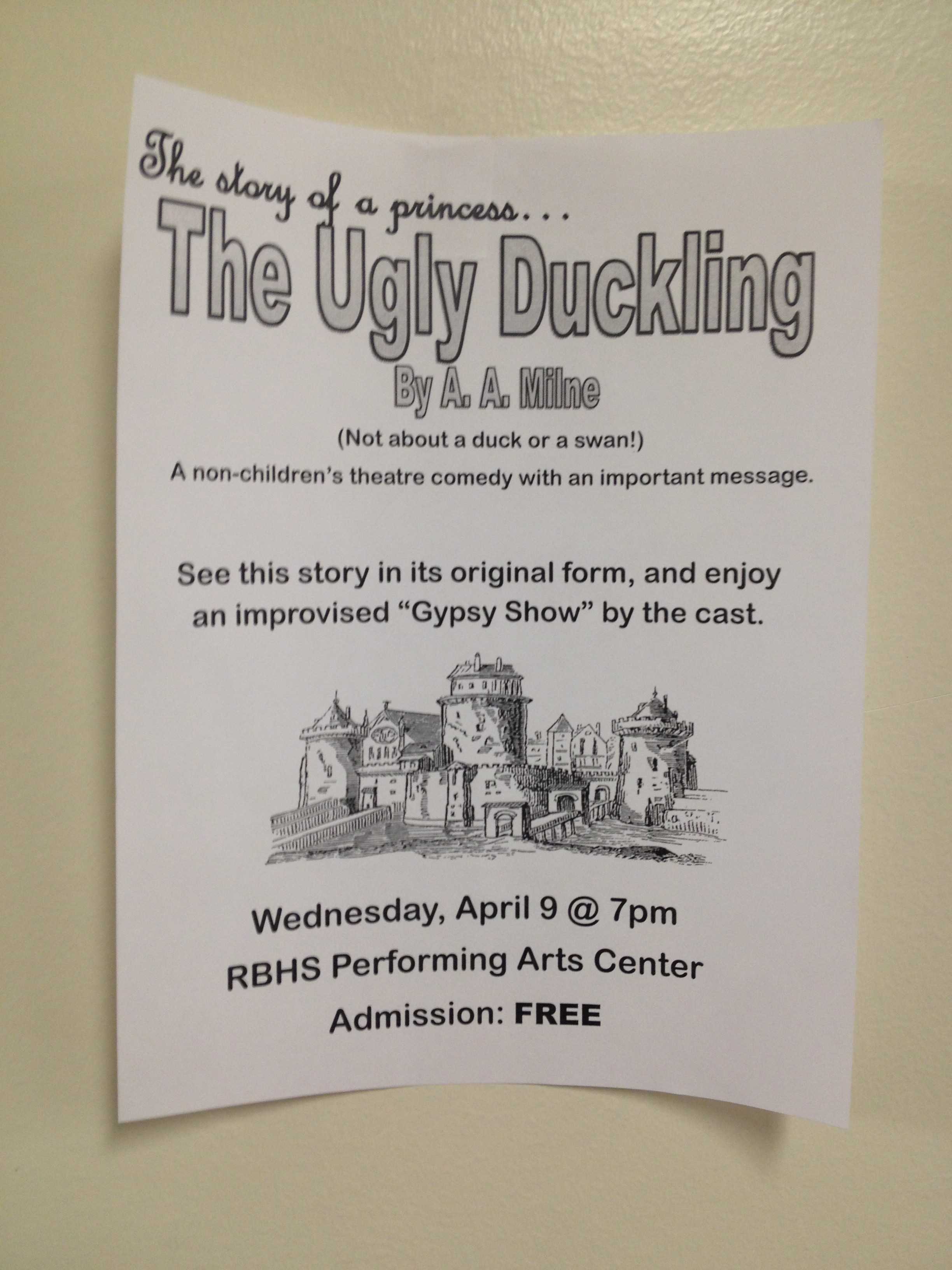 Although the Gypsy Improv Show has been cancelled, the show promises to be immensely entertaining

As the old story goes, the Ugly Duckling will one day become a beautiful swan, and although “The Ugly Duckling”, RBHS’s competitive one act play, is not actually about farm animals, the message remains.

This evening in the PAC, seven students will perform their 35 minute competition, one act for the public.  The play, written by A.A. Milne, of Winnie the Pooh fame, is not about a duckling, but a princess, Camilla, who cannot find a suitor because she is not particularly attractive.  In order to attract a suitable prince, the royal family decides to perform a bait and switch with the princess and her maid, Dulcibella. Little does she know that her prince has a similar plan.

The play has made the rounds from district competition to Jeff Middle School to Gentry Middle School, and now the cast returns to RBHS for its final performance. Since performing at districts, the cast has been refining their show in order to make it even better, and although the play has been mainly performed for a younger audience, like Milne’s other works, the play appeals to all ages, young and old.

Through the magic and the morals, this play is truly geared toward everyone.  “The Ugly Duckling” focuses not simply on the idea of real beauty, but also on true love and vanity, tackling classic fairy tale themes from a satirical standpoint.  Where classic princesses have to turn away aspiring suitors at the gate, princess Camilla is trying her hardest to find one who might consider marrying her. In the end, true love conquers all.

“The king is basically trying to find anyone who would possibly want to marry his daughter, and he’s trying his best,” junior Seth Comara, who plays the King, “the first person that finds the princess beautiful is the one she’s supposed to marry, so obviously being a fairy tale, the prince finds her beautiful and happily ever after.”

This evening will be the cast’s final performance, free in the PAC at 7 p.m.

I wish I could come see this performance! It sounds very witty and original. Can’t wait to read the review!

I’m really excited for this performance, and plan on attending. I remember the one act play performing at districts, and hope to see them continue to perfect and succeed.

Although I’ve never gotten to see them perform before, it’s saddening that they are already ending! I’ve heard they are pretty good and i’m saddened by the idea that they’ll perform their final show and I won’t be able to attend.

I love plays and performances that send a good message to the audience!