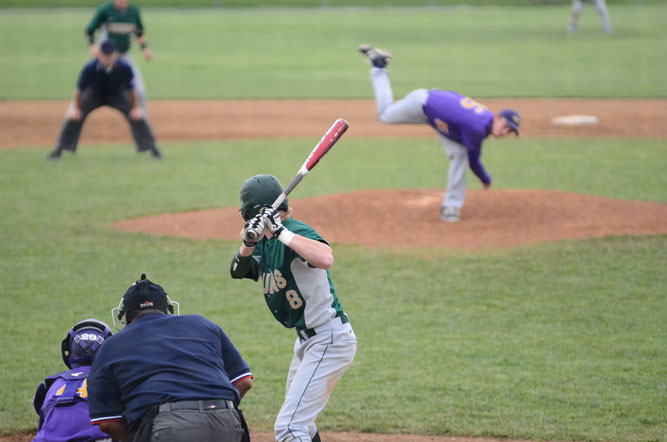 Going into the bottom of the first inning, the Rock Bridge baseball team (19-12) was down eight runs to Helias (19-9). To many teams, this deficit would appear deadly. However, Bruin head coach Justin Towe and his team had different ideas.

“I guess you can address your team a lot of different ways,” Towe said.  When they came in there  I told them they had two choices: either they could lay over and finish it up, or we can try to make the biggest comeback that anyone has ever seen. That’s basically our only two choices.”

The first inning began innocently enough, with the Crusaders’ leadoff man, Alex Barton, singling to centerfield. Barton then stole second, but the trouble began for the Bruins when backup catcher Eric Kuse, filling in for starter Jacob Schmidt who had broken his ankle the day before, couldn’t block a wild third strike from starter Kyle Teter. Austin Sachse hustled beat out the throw to first, giving Helias two men on with none out.

Teter was pulled after six batters, only one of which ended in an out. Chandler Wyatt came in in relief, but two of the three errors the Bruins committed in the first inning occurred behind him, leading to three runs charged to him, and five to Teter.

Going into the clubhouse down eight, none of the Bruins were willing to go down without a fight.

“It wasn’t that bad because we were all really amped up and wanted to make the best comeback ever,” Teter said. “That’s kinda what drove us through it. We ran through a brick wall to get it, but we got it.”

Teter helped out his own cause quickly in the bottom of the first. After the first two batters reached on a walk and a single, he took one of Helias starter Clayton Winter’s pitches all the way over the outfield wall.

“It felt like a dinger,” Teter said. “I kinda wanted to look at it because it felt pretty good, but at the same time if it’s going to be short, I don’t want to be that guy that’s halfway to first when I should be on third.”

What was his approach to that game-changing swing?

“Coach Towe, he came up to me and told me, ‘You see it down there, hit it way out there.’ I was just following orders,” he said.

Cole Evans went deep for the Bruins as well in the first inning, after Winter was pulled with no outs after facing just five batters for reliever Wyatt Porter. Three other Bruin batters also hit triples off the deep centerfield wall, as a strong wind blowing to towards the outfield helped fly balls to carry.

After the end of the first inning, the Bruins found themselves leading 9-8, a lead they would never relinquish. Helias pitcher Andy Devine came in in relief in the second, getting all three outs that inning on his way to pitching five quality innings for the Crusaders. He gave up only two runs (one earned) and struck out seven while walking just one.

The Bruin relievers pitched even better for five of the next six innings. Wyatt pitched into the fourth, and only gave up one more run for a total of four. Ryan Bernskoetter pitched three innings of shutout ball, striking out one and walking three.

Drama came again in the top of the seventh when the Crusaders, trailing 12-9, put two runners on via another wild-pitch strikeout and an infield single. Consecutive singles against Avery Jennings narrowed the deficit to 12-11, but a baserunning mistake by Helias gave the Bruins a second out. With runners on first and second, Alex Faddoul tried to make it to third on a shallow single to centerfield, but ended up being tagged out in a rundown.

When Brock Gerstner flew out to centerfield, the Bruins could finally breath a sigh of relief. However, Towe said after the game that the defensive miscues were a problem the Bruins need to fix before their district final game against Jefferson City (22-7).

“We just need to refocus and talk about, you know, the pressure,” Towe said. “We’ve got a really young, inexperienced team. We’ve talked about process all year. As opposed to results, you know, process. Catching ground balls: hands out front, tail end down, you know. Catch it, separate, turn the hips, throw. Don’t worry about it, don’t think, ‘I’ve got to make the play.’ We’ve tried to be more process-oriented as opposed to results, and we’re just going to go back and start all over again with that.”

Despite their numerous mistakes, the Bruins can look back  on one thing. Towe probably said it best.

“We made a hell of a comeback.”

The Bruins face the Jays at 6 p.m. tomorrow at home in the C5D9 District Championship.