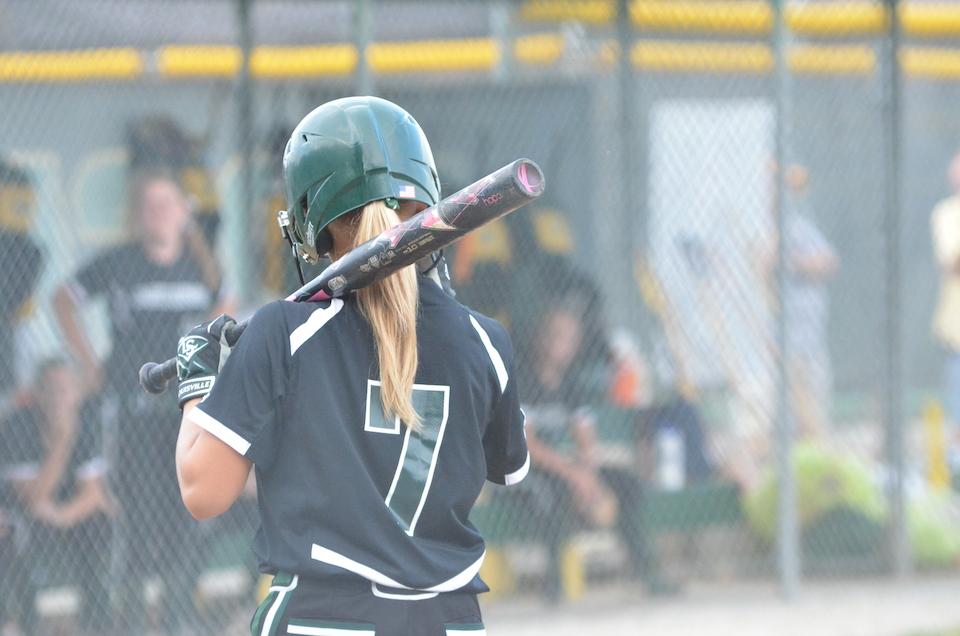 The RBHS softball team (4-6) suffered a bitter loss to crosstown rival Hickman (6-1) on a cold Thursday night, 8-9. The conclusion was unexpected after the Bruins started strong out of the gates in the top of the first, beginning with junior Helen Trice’s single to right which scored two. Four more runs were later added in the inning, which left many spectators believing the rout was on.

The domination continued when Trice took the circle. Dealing early, she left the Kewpies with absolutely nothing to swing at, and pitched a no hitter through three scoreless innings. The Bruins  padded their lead in the top of the fourth when sophomore Delaney McDannold hit a two run double extending the lead to 8-0.

The team’s demeanor began to shift, and the Bruins looked more relaxed with more and more smiles beginning to show on each players’ face.

“I personally was very confident,” McDannold said, “after that I thought we had the game in our pockets.”

But as the temperature plummeted the Kewpies bats began to heat up. After a Hickman triple, senior Shannon Greene belted a three run homer to center field barely inching past the wall and outstretched glove of junior center fielder Lexi Heim in the bottom of the fourth. Two more runs were also added leaving Hickman within three of the Bruins with the score at 8-5.

Hickman senior Morgan Hawkins had been substituted at pitcher in the third inning after replacing Greene. Hawkins held the Bruins scoreless for the remainder of the game, setting up the Kewpies miraculous comeback.

“She (Hawkins) threw quite a few rise balls which was a pitch we hadn’t seen as much previously with Shannon (Greene),” RBHS junior pitcher Dayna Linneman said. “Her style of pitching made it difficult for our team to adjust.”

Hickman added one more in the bottom of the sixth off a sacrifice fly and yells and screams of “Comeback!” were heard all throughout the stadium. With many of the players from both teams having played together since they were young girls, the game had a sense of “bragging rights” riding on it.

“It made it way more intense, that’s what makes the rivalry so great,” McDannold said. “It was like playing against some of your best friends and it makes you want to beat them even more.”

The game headed into the bottom of the seventh, with the Bruins only three outs away from closing out the victory. Kewpie senior Molly Carter blasted a deep fly ball to left field tying the game at 8-8. The crowd went into a feverish pitch and everyone was on their feet. After a couple of singles and a wild pitch Hickman had managed to advance the winning run to third, only a few feet from home.

Trice, who had played second after being taken out in the fourth was now back as pitcher hoping to close out the inning. Trice continued through her wind-up and released the ball sending it sailing into the backstop. The runner from third dashed to reach home plate and arrived safe, scoring on the wild pitch, capping off the Kewpie comeback with nine straight unanswered runs.

“Obviously it was tough on all of us to lose such a close game,” Linneman said, “but we’ll continue to take it one game at a time and work to reach our potential. If we stay focused and continue to work hard we’ll be successful.”

The Bruins will continue their season at the Capitol City tournament this weekend in Jefferson City and hope to gain momentum as they head into the second half of their season.