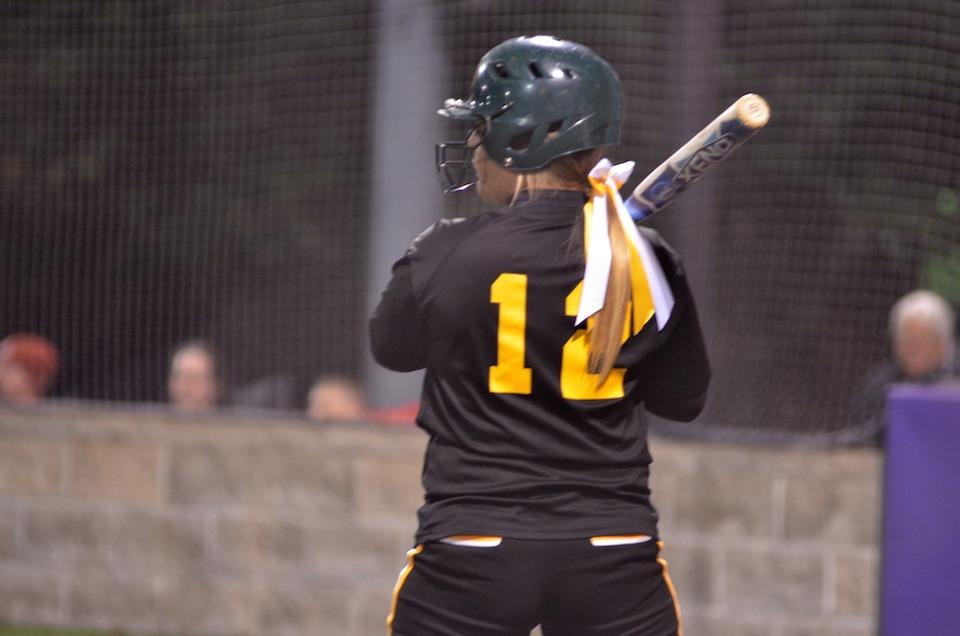 Senior shortstop Taylor Dillard lifts the bat off of her shoulder as she prepares for the upcoming pitch during the district quarterfinal against BHS. The Bruins would ultimately prevail powering past the Spartans 11-1.Dillard recorded an RBI ground rule double and scored twice in the game. Photo by Madeline Kuligowski.

The last time the RBHS softball team (11-14) played Battle (14-13) the game was a barn burner all the way to the finish. This time the script was different, with the Bruins powering past the Spartans behind an offensive outburst and junior Helen Trice’s arm.

In the first meeting between the two teams this season the Bruins won the game in dramatic walk off fashion, 11-10, without senior third baseman Amanda Bouchey or head coach Janel Twehous who both had to sit out the game after Bouchey played in a game she was ineligible for.

This time around under a full moon in the class four district nine quarterfinal game the fourth seeded Bruins handily defeated the fifth seeded Spartans 11-1.

The game was decided in the bottom half of the second as the Bruin’s bats exploded. The inning started with a single by junior centerfielder Lexi Heim who then advanced to second on a Battle throwing error. Next in line for the Bruin’s freshman rightfielder Bailey Devlin reached base safely as the Spartan’s defense missed played a fielders choice allowing Heim to advance to third base and Devlin to get on base at first.

With runners on the corners senior catcher Kelsey Knorr ripped an infield single to score Heim from third. Junior leftfielder Delaney McDannold followed Knorr with an RBI single of her own to make the score 2-0 Bruins. Scoring wise that would ultimately be all the Bruins would need but they weren’t done yet. After Bouchey drew a walk, senior first baseman and clean up hitter Maddy Cole stepped into the batter’s box and promptly delivered a bases clearing three run double to give the Bruins a strong 5-0 lead.

“It was really good to just get on top and everything for my team,” Cole said. “It was a good opener for our team and that just led us the rest of the game.”

Another Battle error allowed senior shortstop Taylor Dillard to reach base bringing up Trice. Trice helped herself and lined a double into the gap scoring Cole and Dillard extending the lead to 7-0.

“It felt pretty good especially because I just came out of a slump.” Trice said.

The Bruins would bat all the way through the lineup before finally recording three outs. In the top half of the third Trice followed up the strong offensive performance by retiring the side in order with help from McDannold who made a tremendous running catch on a long fly ball for the final out of the inning.

In the top of the fourth inning the Spartans threatened to counterpunch with a offensive blow of their own by loading the bases. In Trice’s one blemish of the night she walked home a run before Bouchey snared a hard hit line drive headed towards the third base bag and doubled off the runner to end the inning with an unassisted double play.

Trice kept dealing setting down the side in order again in the top of the fifth inning.

“Helen did really well, she came out from the beginning throwing strikes and keeping the batters off balance so that was really important,” Trice’s battery mate Knorr said. “And she was just really fired up the whole time and never got down.”

In the bottom of the frame the Bruins kept with their scoring ways. With two outs the fleet footed McDannold reached on an error which Bouchey followed up with a frozen rope single. Cole added her fourth RBI of the game with a bloop single scoring McDannold and then Dillard smashed a ball into the left centerfield gap that bounced over the wall for a ground rule double. After the Dillard double the Bruin’s were sitting pretty with a 9-1 lead. Fittingly Trice ended the game with her second double and fourth RBI of the evening, plating Cole and Dillard again, forcing the mercy rule to come into play.

With the win the Bruins advance to play top seeded Blue Springs (27-1) in the district semifinal tomorrow at 5:00 p.m hosted by Hickman. Earlier in the year the Bruins lost to the Wildcats 7-0 at Missouri Southern State University as part of the Joplin tournament.

“They’re an awesome team. We played them in the Joplin tournament and lost to them there but held them in like the first inning,” Cole said. “So basically we’re going to go out there and play our hearts out, and whatever happens, happens.”