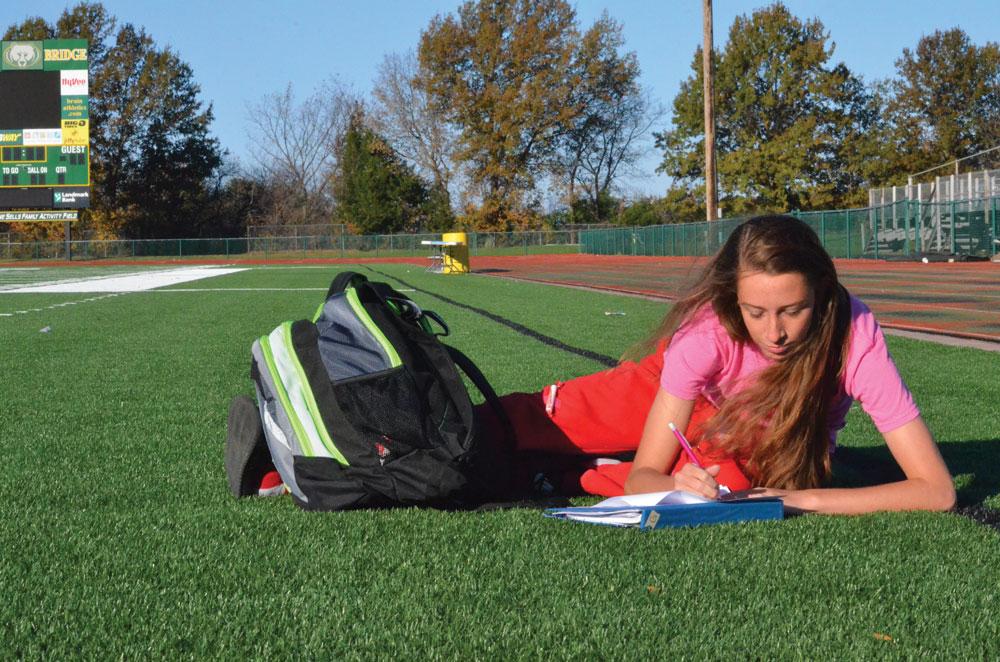 School is one of teenagers first priorities, providing education, but also consuming countless hours studying, memorizing and testing. Although schooling is most often the focus of success, health seems to have taken the backseat.

In 2013, 16.6 percent of high school students were overweight, and 13.7 percent were obese, according to a national survey from the Youth Risk Behavior Surveillance System. This significantly impacts the performance of students, as health affects both the physical and emotional aspects of the human body.

With the continuous tests, essays and school activities that keep students busy, they often make their hectic schedule a priority over their health.

Sophomore Lisa Zhuang plays tennis with the RBHS tennis team which, she said, gives her a great opportunity to do what she loves while getting time to exercise.

“I think exercise is really important because it shows us that we can get stronger, we can improve and I also think it’s a really good way to de-stress yourself,” Zhuang said. “I play my sport because I want to see myself improve, I want to be able to see [that] I can dedicate to something [and] get better at it.”

Although her sport helps her to stay healthy, she said the late hours and time commitment can make other aspects of health harder to manage.

[pullquote align=”right”]”I shouldn’t be depriving myself a lot of sleep or anything just for school work.” Lisa Zhuang, sophomore[/pullquote]

“For me it’s a little bit harder [to stay healthy playing a sport] because you get home pretty late and then it’s a lot easier to just be stressed out and grab the first thing you see [to eat,]” Zhuang said. “It’s good to have a few hours of exercise but it can be really stressful.”

Although the tennis team does not play year round, when it is in season during October, the team meets every day after school. These two hour practices cause her to come home around 6:30p.m., leaving her little time to eat dinner and complete her homework before heading to sleep. One of the biggest challenges she has had when doing homework while stressed is having a healthy snack.

According to a study from The Journal of Nutrition, approximately 97 percent of Americans snack, which gives them an average of 24 percent of their daily calories coming from snacks. With snacks becoming a large source of calories for people, it is especially important for snacks to be healthy, according to an article from healthyeating.sfgate.com. It also prevents overeating, provides extra nutrients missed during meals, and keeps blood sugar levels stable. Without a snack, students often reach for an unhealthy food and retain less information which, in turn, affects their overall performance in school.

Between the long hours of tennis and school work, one thing Zhuang struggles with the most is organization. Organization is the starting point for academic achievement, according to an article from schoolcounselor.org. This means in order for students to effectively retain information in school, they need to master the foundational skills in order to learn.

To help her manage her busy schedule regarding school work, her goal is to space out her work and organize it all on the weekend when she has time to plan out what she will do in the next week. She hopes this will save her from being too stressed, and keep her from doing all her work in one day.

Even though sports take up a considerable amount of time out of students’ schedule, it is not the only thing that contributes to a busy schedule.

Junior Stephanie Kang is involved in many clubs, some of which she has taken leadership roles in. She is the president of Science Olympiad and Calculus club, core leader for — CARE, one of the groups in RBRO — as well as a member of countless other organizations. This commitment means leading and directing a group of about 40 to 80 people, which includes preparation and participation for the activities in each club.

To cope with the stress of an overloaded agenda, Kang is trying to learn from her mistakes last year, where her lack of sleep and focus decreased as the hours of golf stretched further into the evening.

Sleep is essential for the body’s well-being and can even help people to eat better and manage stress as a teenager, according to an article from the National Sleep Foundation. Teenagers need an average of 9.5 hours of sleep each night. Sleep deprivation can limit in the ability to listen, concentrate, learn and solve problems. Little sleep also increases the risk for developing acne and aggressive or inappropriate behavior.

“I try to sleep a lot because my sophomore year, I didn’t sleep that much and it kind of hurt me in a [way that I couldn’t] focus in class a lot and I couldn’t do as many activities as I wanted to,” Kang said. “So sleeping is very important.”

So far, this year and last year have been similar as far as the demands of a packed schedule, she said, but the major difference between the two years is the time commitment she had when playing golf with the RBHS team. Practices were held after school, where they perfected their moves for three hours. Kang would arrive home around seven or eight in the evening, tired and unproductive.

After most of the days when the golf team finished their tiring practice she was unable to eat or even stay awake because she was so tired, she said. Her sleepiness made it difficult to do activities in school like clubs, this is one of the reasons why her goal is to get enough sleep. Along with getting proper sleep, another thing she is making a conscious effort to do is eat meals at regular intervals and not let her busy schedule mess with her regular eating times.

“I’ve been trying [harder] to be conscious of my health because just last year I’d get sick a lot and I’m usually not the type to get sick a lot, but last year I think I [put] too much burden on my body,” Kang said. “This year I’m trying to make sure that I get enough sleep and I eat healthy and that I do what I can to stay healthy.”

She focused not only on eating meals consistently, but also eating healthy. Students who do not eat a diet filled with healthy food have an increased risk for chronic diseases such as heart disease, cancer, and diabetes, according to an article from livestrong.com. By consuming more high fiber foods, such as celery, apples, lentils, and more, people can decrease their chance of developing various diseases including heart disease, constipation, and diabetes, according to an article from Harvard University.

RBHS has a total of 19 different sports like volleyball, football, cross country, and wrestling. With this variety of sport activities, Jim Scanlon, RBHS strength training coach, said there is a trend within the school that gravitates toward overall fitness.

In his strength training classes, for nearly 32 years, students are not only taught to lift weights safely, but also taught the importance of stretching and flexibility — something they do before every exercise. Scanlon also ensures students know to drink water, warm up before working out, and make healthy food choices.

One of his goals for students to take away from his classes, as well as their overall time at RBHS, he said, is to continue the healthy habits they adopted and stay fit throughout their lifetime.

“I think lead[ing] a healthy lifestyle [is one of the most important wellness tips]. Not just here, but after you get out of high school,” Scanlon said. “Hopefully we’ve taught them some things where they can continue to work out, they continue to walk or run, they continue to lift, continue to eat the right type of foods. It’s kind of everything we talk about here.”

For some students like Zhuang, health extends farther than performance in sports and academic level. Growing up surrounded by people putting all their energy into her success, it only makes sense for Zhuang to give it back to other people by helping them achieve what they want to in life. She sees health as the conductor of her capabilities and always seeks to find how she can benefit others while she goes through life. This is something she cannot do to her greatest ability if she is in poor health.

A Study in Surrealism

Peeling back the layers: students, instructors uncover what makes a good teacher

Incorporating several students’ real day-to-day lifestyle on how they manage schoolwork, athletics, and health made it more enjoyable to read, when compared to a tedious health article compiled with statistics and numbers. Adding tips/advice from students who have mastered a healthy lifestyle could help those who are struggling to maintain a lifestyle of their own.

It’s always been hard for me to find the balance between schoolwork, being healthy and taking downtime. I’m really glad you explored this in this article, which is great.