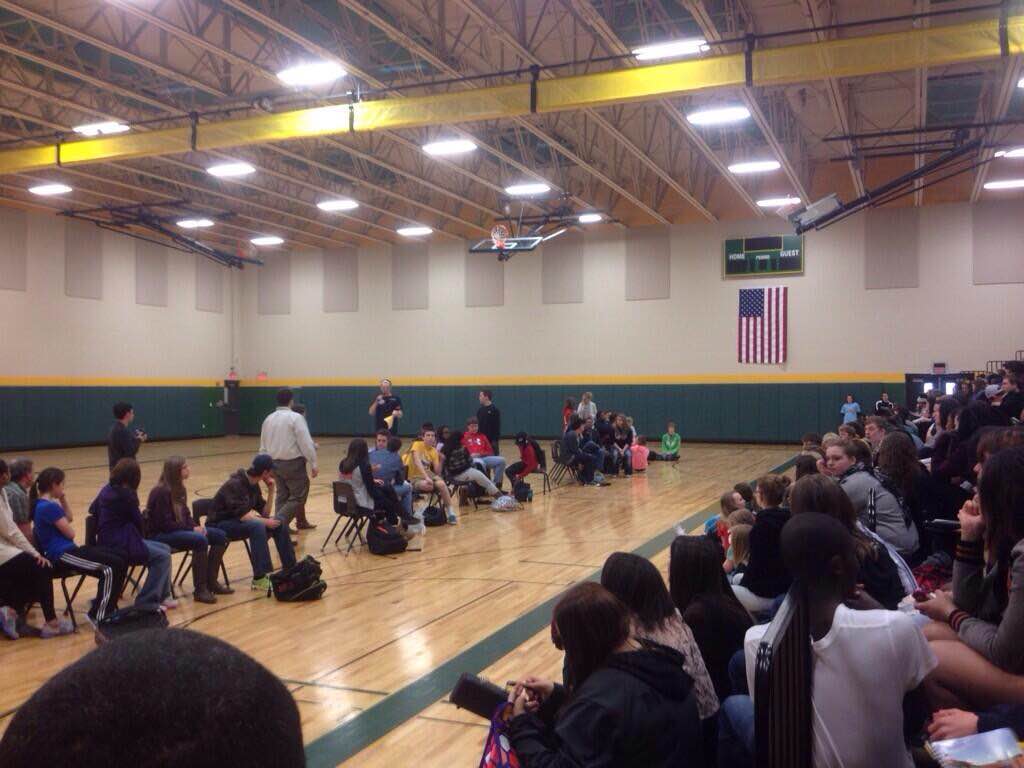 After inviting students to an after school meeting Monday, March 16 and holding teacher forums for two days the week before and talking with PTSA members, Dr. Jennifer Rukstad, RBHS principal, announced today to teachers in this morning’s faculty meeting, March 20, there will be no Bruin Block for the 2015-2016 school year.

“Everyone knows there are different opinions throughout the building with students, staff and parents,” Dr. Rukstad said. “A decision had to be made, but it was never going to be kind of 100 percent. This is what everyone wants because we know the majority wanted what we ended up with. I listened to the entire faculty.”

Some students who were unable to attend emailed Rukstad or wrote letters to give their input on the changes on Bruin Block.

“I feared that it might not be clear what people would want given the choices, but just gathering as much information in the opinions of many and getting written feedback,” she said, “it was more decisive when asked which of the three choices everyone was in favor for.”

For the 2013-14 school year, Bruin Block began at RBHS as a mandatory daily 30-minute class to provide freshmen, sophomores and juniors with the chance to get guidance when signing up for classes, do service projects for the community and connect with a unique set of peers and teachers. The scope of the course changed this year when students met Wednesdays and Thursdays.

From the beginning, the course has gotten varied opinions from students and faculty members, and the decision had to made whether or not to have it every day, leave it the same or not at all.

Junior Ana Ramirez said she had mixed feelings. But she didn’t want to have the course as it is currently configured.

“Classes wouldn’t be as long [with daily Bruin Block], and Bruin Block is nice when you need a teacher’s help, and it has benefits, but for the most part I feel like they should just cut it or give it to us every day. I don’t think the content helps us because most of the time it’s things that we already know. I feel like it’s a waste of time. I really like the people in my Bruin Block along with my teacher, but I just think it’s a waste of my time, and I could be using that time to study or do homework instead.”

Junior Bailey Grieshaber, however, said she felt no such ambiguity. She is in favor of moving to not having Bruin Block next year.

“I think, overall, the general idea of Bruin Block is good,” she said. “It’s just that so many people don’t want to do it, so we don’t do anything. In my Bruin Block we sit in a classroom for 30 minutes and hang out and talk; however, I would much prefer doing something productive during school. I don’t think we should have Bruin Block next year because, although it’s a good break in the middle of the day, it would be much more useful to put that 30 minutes towards learning.”

Unlike Grieshaber, junior Ronni Farid would like to continue with Bruin Block next year and believes it’s a good thing for RBHS students to be a part of.

Along with Farid, math teacher, Michelle Ebberts agrees that Bruin Block should have stayed in students’ schedules. She said she has grown to appreciate being able to interact with students that she normally doesn’t see in the classes she teaches and believes that having Bruin Block has been helpful in the lives of students.

“When the announcement was made, I was sad, just thinking about my own Bruin Block and how much I’ve enjoyed, since I have juniors, just thinking about how much I’ve enjoyed watching them grow and being able to be a part of their lives. Thinking about how I won’t be able to see them on any type of regular basis since they’re seniors just makes me really, really sad. So that was my initial reaction, just feeling sad and disappointed that I won’t get to carry on the relationships maybe in the way I would like to next year,” Ebberts said. “I think that having Bruin Block has challenged everybody to think about themselves in a way that they might not have been required to, especially students. I think it’s been helpful just in the sense of giving students the opportunity to not have to think about the regular content in a school day and providing them that safe space to be and have the opportunity to reflect on their lives which I think we all need to do more of. I don’t know what it’ll look like next year. I don’t know if it was a good decision. I’m just glad I didn’t have to make the decision. I think it’ll be interesting to see how things shape up for next year. I think we could really be missing out on something that’s really cool.”

Dr. Rukstad realizes the shift in the schedule will be an adjustment.

“I honestly think next year will be a change,” she said. “Yes, I’m not really judging whether it was a good choice or not. I think the things that we were trying to accomplish with the model we had regardless, of the schedule, are still the right things to try to accomplish. That doesn’t necessarily mean that was the right model to do at the right time or whether continuing is the right thing at the right time, so, yes, it’ll be different with no Bruin Block, but we’re still committed to supporting students transition to high school and from high school and paying attention to the social, emotional needs. I think the nature of our school is to constantly try new things, to do things better… we’ll continue to be pushing toward how can we serve students better.”

Caylea Ray is girl who spends way too much time watching Netflix. Occasionally, she writes and takes pictures for The Rock and Bearing News. There is not a single day that Caylea doesn’t show up at school in style. Even sweatpants and a simple t-shirt look good on her, without fail.

As a current freshman I’m personally very sad about this because of how great a time I have with my class. Hopefully next year they can find someway to substitute it without taking away AUT

It’s weird that they’re getting rid of Bruin Block after only having it for two years.