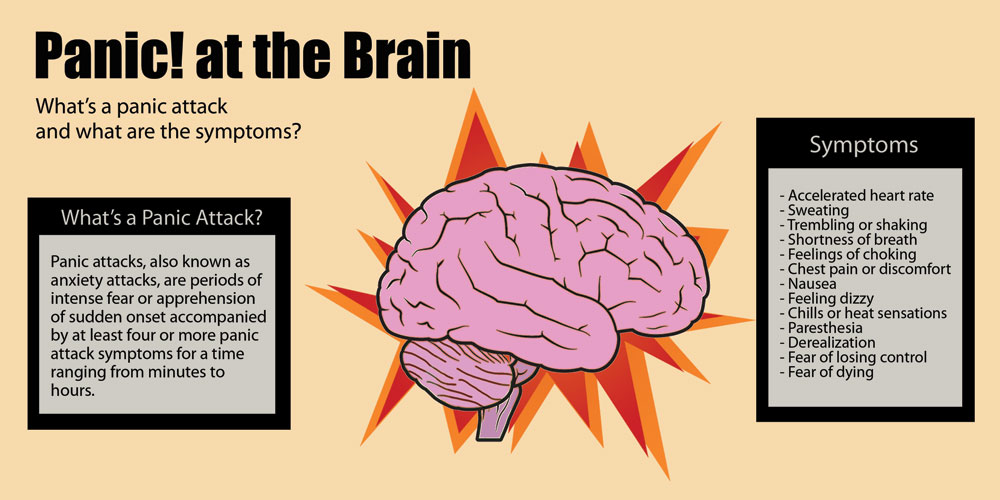 It was in Molly Sparkes’ seventh grade French class that she experienced her first panic attack. Her hands grew clammy, her chest started to hurt and she began to hyperventilate as she worried about all of the things she needed to deal with at the time.

“It was really scary because I wasn’t really sure what was going on…. So, I just wasn’t focusing on what the teacher was saying. I wasn’t focused on French at all or anything like that,” Sparkes said. “I was just so wrapped up. It was like a snowball effect. Just all this different stuff that was coming down on me, and I felt like I was going to start crying.”

It took Sparkes nearly an hour before she was able to calm down from the panic attack with the help of her guidance counselor. Afterward, she said she felt physically exhausted from the stress it had placed on her body.

[pullquote]I was just so wrapped up. It was like a snowball effect. Just all this different stuff that was coming down on me, and I felt like I was going to start crying. —Molly Sparkes, junior[/pullquote]

Sparkes isn’t alone. Approximately 25 percent of all teenagers experience a lifetime prevalence of some anxiety disorder, according to a 2010 study by the National Institute of Mental Health.

Mary Flanagan, a psychologist at Mayer, Flanagan, Scott & Associates, said she has worked with many teenagers who have experienced panic attacks. She said both the triggers and the symptoms for most panic attacks can vary among patients.

“In a panic attack, your heart beats rapidly. Sometimes you hyperventilate because you are trying to breathe fast. You just have all of these symptoms,” Flanagan said. “It feels to some people as though they are having a heart attack. Your hands get numb. You get light-headed. There’s a whole lot of symptoms that go with a panic attack.”

Though junior Sydney Hemwall has also experienced panic attacks, she said they started in her freshman year and the symptoms she experienced were much more severe.

“It felt like I was dying. It was the most awful thing I had ever experienced,” Hemwall said. “I was screaming, crying and shaking all at once while all these thoughts and fears were going through my head that came with the feeling of dying. I didn’t want to die, of course, and [I] just kept getting more upset because I had no idea how to handle it.”

In fact, one of the first steps Flanagan takes with patients who have severe anxiety is to explain the physical responses occurring in their body during a panic attack and how to deal with them.

“I usually try to help them understand the physiology of panic attacks, like what happens in your body. It is basically a flight-or-fight response. That’s basically what a panic attack is, but unlike an actual, physical danger where we run away or fight, in a panic attack, you can’t really do that so you’re trapped with all of the symptoms but with nothing to do about it,” Flanagan said. “The things that cause panic attacks now are what we call psychological dangers.”

After the patient understands what might be causing his or her panic attacks, Flanagan said, she often teaches them techniques such as breathing and thinking past their fears, which they can use to handle their anxiety on their own.

“I teach them about belly breathing… If you breathe that way, you really can get the panic attack to stop,” Flanagan said. “You also have to give yourself some positive messages, like, ‘I know what this is. I’m having a panic attack because I was worrying about this or thinking about this.’ When you were little, your parents always told you it was going to be all right, [but] as you grow up, you have to learn to tell yourself that.”

[pullquote]It is basically a flight-or-fight response. That’s basically what a panic attack is, but unlike an actual, physical danger where we run away or fight, in a panic attack, you can’t really do that so you’re trapped with all of the symptoms but with nothing to do about it. —Mary Flanagan, psychologist[/pullquote]

Much like Flanagan, Sparkes said the best ways she has found to combat the anxiety she experiences during a panic attack are breathing slowly and talking through the situation that is worrying her.

“You have to say stuff. You have to write stuff down,” Sparkes said. “[Also], people tell us this all the time, but you need to remember to breathe. People are like, ‘Just take a deep breath and see what happens after,’ and people think that’s taboo and that’s ridiculous, but you need to remember to breathe because that’s something that is very easily forgotten in a state of panic.”

Hemwall agrees that breathing exercises like those described by Sparkes and Flanagan can be helpful in bringing her out of a panic attack. In addition, she said having a friend nearby to comfort her can help curb her anxiety faster and help her to calm down.

“It helps to have someone hugging you tightly because it can cause you to relax,” Hemwall said. “Hugging is a very relaxing sensation for most people and can bring them down and get them calm in a matter of seconds.”

While support from friends can be beneficial during a panic attack, Hemwall said it is more important to her that more people realize the frightening nature of panic attacks and, in the long run, come to support those who suffer from anxiety disorders as a whole.

“Panic attacks in general are not something to mess with. Many people are brushed off, not given any help through their mental illness which causes them to become more damaged or learn to take care of themselves and sometimes they mess up,” Hemwall said. “Many people suffering from panic attacks can often have very bad anxiety and need help. Being ignorant about mental disorders has become a problem and needs to stop. The brain gets sick just as much as your stomach gets sick.”

I feel like if 1/4 of students are going to have a panic attack how to deal with them ought to be covered in health class.