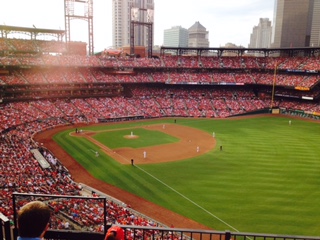 *All statistics are from the 2014 season unless labeled otherwise.

[spoiler title=”Notes” open=”yes” style=”simple” icon=”chevron”]RBI: runs batted in (over 90 RBI represents an above average season)
OPS: on base plus slugging (the team average in 2014 was .700)
WHIP: walks and hits per innings pitched (a WHIP of one represents an above average season, under one represents a very good season)
ERA: earned run average (an ERA of under three is an above average season)
OBP: on base percentage (the team average in 2014 in the MLB was .314)
Silver Slugger: the award given to the best hitter at each position  Triple Crown: similar to its horse racing counterpart, this rare feat requires a hitter to lead the league in batting average, home runs and RBIs.[/spoiler]

As the RBHS Baseball season began, and the Bruins strive to defend their title, the Major League Baseball season is just around the corner, as well.  With opening night on Apr. 5, featuring the Chicago Cubs and St. Louis Cardinals, 2015 looks to be an exciting season.  A hectic offseason, with big-name players travelling across the country and changing teams, completely changing the landscape of the league, could make the 2015-16 season extremely entertaining.  Here are some awards and predictions for the upcoming season:

The Padres acquired three all-star caliber outfielders (LF Justin Upton, CF Matt Kemp, RF Wil Meyers) and ace pitcher (RHP James Shields) all in one offseason.  With these acquisitions, the Padres added 102 RBI from Upton (an increase of 55 RBI from last year’s left-fielder Chris Denorfia), an .852 OPS from Kemp (compared to Alex Amarista’s .692 of 2014), as well as the 2013 AL Rookie of the Year, Wil Meyers.  Shields, nicknamed “Big Game James,” boasts a 1.18 WHIP and a 4/1 strikeout-walk ratio.  To further improve their pitching, the Friars added All-Star catcher Derek Norris.

The veteran presence of Upton, Kemp and Shields in the clubhouse as well as the offensive production that was acquired will drastically improve the team.  Although it will not push the Padres over the star-studded Los Angeles Dodgers, San Diego will  oust the 2014 World Series Champion San Francisco Giants.  After winning only 77 games in 2014, the Padres will finish second this year in powerful NL West, winning 89 games.

Building around superstar Giancarlo Stanton (.950 OPS, 2014 league leader in home runs and Silver Slugger Award winner), the Marlins signed several key infielders (1B Michael Morse, 3B Martin Prado, 2B Dee Gordon) to improve their lineup.  Morse, a nine-year veteran, provides much needed experience in a young clubhouse, while Prado offers an .877 OPS.  Dee Gordon’s 4 steals and 12 triples adds a spark to the top of the lineup and defensive security up the middle of the infield.  The Fish also added Mat Latos (1.15 WHIP), 12-year veteran Dan Haren and will get 2013 NL Rookie of the Year Jose Fernandez (career 2.25 ERA, .97 WHIP) back from injury.

The Nationals will easily win the AL East with their superb pitching staff and impressive batting lineup.  But after finishing fourth in 2013, the Marlins will place second in the NL East and make the playoffs for the first time since 2003.

With these acquisitions, the White Sox will be drastically improved from last year.  Building around 2014 Rookie of the Year Jose Abreu, two-time Silver Slugger Alexei Ramirez and star pitcher Chris Sale (2.17 ERA, .966 WHIP), the Sox will place second in AL Central behind the powerhouse Detroit Tigers, an improvement from last year’s fourth place finish.

For the last five years, the Cubs have been dismal, placing fifth in the NL Central all five years.  Based on the moves in the past offseason, however, the Cubs could turn some heads in the 2015 season.  Building around the young talent headed by Starlin Castro (.339 OBP) and Anthony Rizzo (.913 OPS), the Cubs front office added catcher 9-year veteran Miguel Montero, pitcher Jason Hammel (2.98 ERA), center fielder Dexter Fowler (.375 OBP) and esteemed lefty hurler Jon Lester (1.07 WHIP, 2.35 ERA).

Under the new management of Joe Maddon, the Cubs will improve drastically, but not surpass the talented, veteran St. Louis Cardinals.  Chicago will second place in the NL Central and face the Marlins in the Wild Card Game.

For years, the Astros have been the doormat of the Central Division, as well as the league. But young talent and offseason pickups could lead to a successful 2015 season.  Free agent signees Evan Gattis (.810 OPS) and Colby Rasmus join phenom George Springer (.804 OPS) in outfield, while Jed Lowrie and Luis Valbuena accompany AL Batting Title Winner Jose Altuve (.377 OBP, .830 OPS) in the infield.

This combination of young talent and experienced players will lead to a successful 2015 season for the Astros.  After winning only 70 games in 2014, the Astros will win 82 games in 2015.

Detroit will easily win the first three games of the series behind power hitting and stellar pitching.  The Mariners will salvage game four behind star pitcher Felix Hernandez, but the Tigers will win Game Five, and the series, in dominating fashion.

Solid story. I wonder whether or not the Royals will be able to snag a playoff spot (obviously after their 7-1 start it is looking likely), and I’m really not that high on the Nationals.