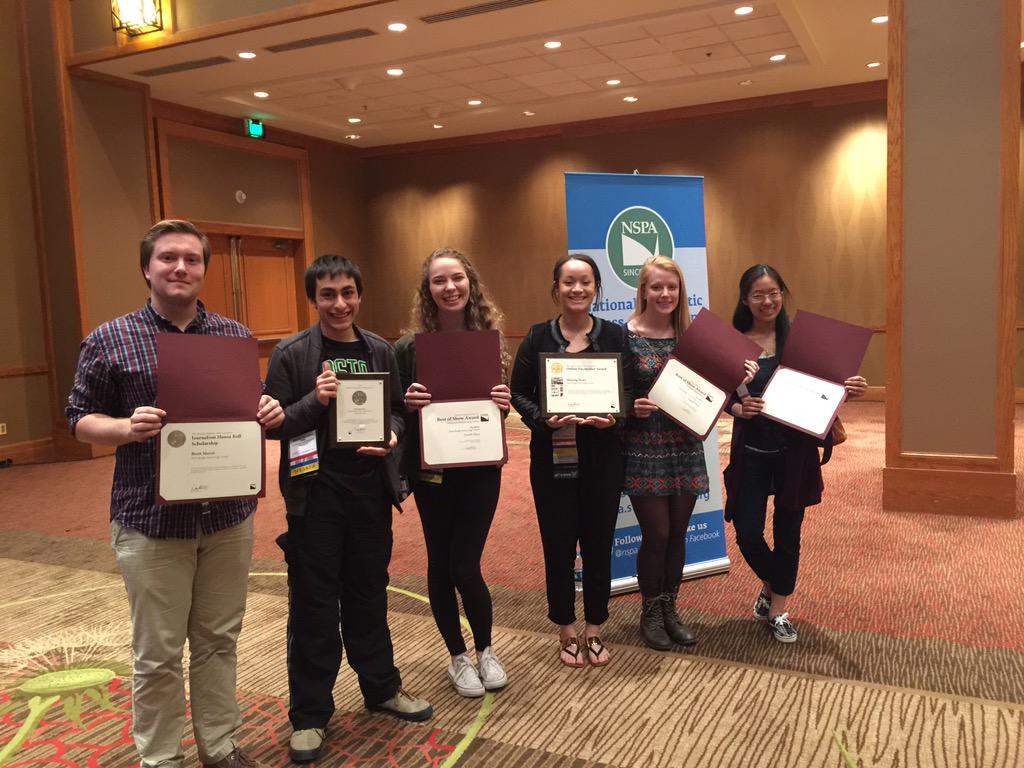 The group entered The Rock, Bearing News, Flashback and Southpaw in the Best of Show contest, and each member competed in an individual write-off contest.

“Best of Show is a competition that anyone who goes to convention can enter into,” junior Abby Kempf said. “There are categories for best newspaper and best online and best yearbook, and other things like that. Newspaper placed in every category we competed in for Best of Show, so that is really exciting. We had enough different awards from the competition that we all could hold one when we took pictures, so that was a great feeling.”

Bearing News and The Rock each took fourth place Best of Show, and Southpaw won eighth place, Kempf said. Additionally, Bearing News won Pacemaker for the fourth year in a row. NSPA offers Online Pacemakers to “student-directed online news organizations” and judges entries based on design, navigation, writing, editing, graphics and interactivity, according to NSPA. Bearing News has won Pacemaker every year since its creation in 2011.

“The Pacemaker shows that we’re one of the blue-blood programs of high school journalism in America. It means that Bearing News is one of the top 15 high school news websites in the world,” senior Brett Stover, Editor-in-Chief of Bearing News, said. “Our staff has continuously put forth effort at such a high level throughout this year, and I couldn’t be more proud of how we’ve come together to succeed and accomplish our goals.”

In individual write-off contest, too, RBHS journalists found similar success. Kempf, who worked with seniors Abdul-Rahman Abdul-Kafi and Renata Williams on the “Online News Package” team, said Best of Show contests judge work a journalism staff did before and outside of convention, while the individual and small team write-offs require individuals to meet a certain goal with no outside preparation or help.

“It focusses on timeliness and getting things out without a lot of outside help, like focussing on your group and not having someone be able to edit you or be able to make sure what you’re doing is good. You have to be checking yourself,” Kempf said. “My team was really good at coming up with ideas quickly and then immediately jumping in instead of second guessing ourselves or waiting to get started.”

With her two teammates, Kempf produced an in-depth article with multiple stories, photos, videos and infographics. Kempf said her group finished with only three minutes left in the competition, but it was worth it because earning an “Excellent” rating is equivalent to second place.

“We started at 10:30. They gave us our prompt … and our job was to go out and interview people based on the prompt either from around the city or the convention center,” Abdul-Kafi said. “Then we [had] to go back and transcribe all the interviews and make infographics and put it on Bearing News and make it look nice. We decided to do a poll as well as interviews. We made three infographics and three stories along with the poll and then put it together and made it look nice on Bearing News.’”

In the Social Media Reporting write-off contest, Stover and junior Alice Yu earned a “Superior” rating, the highest rating possible and the only one given in that category. In this contest, writers were asked to answer the prompt “So many people, so many stories,” by using social media coverage. Stover and Yu used YouTube ‘Eye Capture,’ an app that allows video editing and uploads directly to YouTube. They also used Twitter and used iPhone “notes” to write stories longer than 140 characters.

“[The contest] started at seven for us, and we got our assignment, which was to cover the stories of people in Denver,” Yu said. “I thought of Humans of New York, and we decided to go towards that direction. Since it was a new category for us, we didn’t know what to expect, but the theme was really easy to work with. The first thing we did was we sent out this tweet that was kind of introductory, and then we made a video kind of of the scenery around Denver. We went way out far away from the convention center to get stories from strangers, including a bus driver, which was personally my favorite.”

Yu said she and Stover worked as a team on the entry, with Yu getting stories and Stover tweeting out the information as she got it. Although Yu said she wished they could have gotten more stories, she was proud of the outcome.

In both categories, the groups received the information and rules for the contest on Friday and completed their entries within a few hours. Their entries were then judged at the conference, and the awards were announced  Sunday.

Counting this convention trip, Abdul-Kafi has been to four conventions in the past two years. Each convention he has competed in write-offs and has seen his staffs’ publications receive many awards, but in his senior year, convention has taken on a different meaning.

“This time when we got the Pacemaker, and when we got the Best of Shows it definitely felt very different than it did last year because this time I was an editor, and I had a big part, along with everyone else in journalism, in getting that award, so it felt like I really earned it,” Abdul-Kafi said. “I guess as a senior it’s kind of like a going away present. It’s as if I have contributed to the future of The Rock.”

Luke Chval, Emily Franke, Stover, Derek Wang and Williams earned spots on the NSPA Journalism Honor Roll. They had achieved a 3.75 or higher grade point average (on a 4.0 scale) and had worked in student media for two or more years. Stover was named runner-up for the national Journalism Honor Roll Scholarship and received $500 toward his college education.