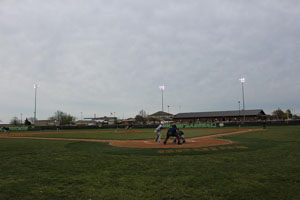 The state title of last year is a distant memory. Nobody is celebrating the victories obtained in the past. With six games remaining in the RBHS regular season, minds of players and fans alike begin to wander toward the road ahead—the journey after the regular season, the MSHSAA (Missouri State High School Athletic Association) state championship.

The Bruins won the title last year as underdogs, a feat they hope to accomplish again this year. This season, however, they won’t be the underdogs. They’ll be the team to beat.

With a 24-4 record, the Bruins will go into the state tournament as front-runners.

“There is definitely a target on our backs. People play their best pitchers against us,” said junior pitcher and second baseman Avery Jennings. “However, the guys on this team have been putting in work in the weight room, in the classroom, on the field and it shows.”

Jennings isn’t wrong. The Bruins have showed up on the field. RBHS’s only in-state loss came against Staley, one of only two blemishes on their record. That very same record includes victories over fifth-ranked Eureka High School and fourteenth-ranked Notre Dame High School. Though these wins are impressive, the Bruins aren’t letting it get to their heads.

“Any team can be a roadblock once we get to playoff time,” said RBHS Head Coach Justin Towe. “It only takes one bad outing against a team that suddenly gets hot to derail an entire season.”

Towe speaks from experience. Last spring it was the Bruins who unexpectedly got hot and took out favorites such as Blue Springs South and the reigning champions, Francis Howell. The Bruins’ quest for a repeat title will begin with the district round held at Hickman High School. RBHS is in the ninth-district, which includes in town high schools HHS and Battle High School as well as Camdenton High School, Jefferson City High School and Smith-Cotton High School. Of those teams only JCHS and SCHS boast winning percentage above .600.

Last year the Bruins capped off an unexpected playoff run by dominating the pitcher’s mound, and lifting the state title trophy for the first time in school history. This year they look to repeat last year’s feat, and they have the veteran leadership to do it. The Bruins head into the postseason boasting nine seniors, all of whom were present for last year’s championship.

“The amount of seniors we have this year has definitely increased the amount of leadership we have,” sophomore infielder, designated hitter (DH) and pitcher Nick Wohlbold said. “This has helped us on and off the field.”

Seven of the nine seniors on the RBHS roster have signed commitments with various colleges to continue playing baseball at their respective schools.

“Each one of them has a major role on the team and is performing at a really high level,” Towe said. “I think all the experience they have is what has lead us to this point with our program.”

Senior Logan Twehous sees the experience that the seniors bring.

“It has really helped us a lot,” Twehous said. “Most of us [seniors] got to play in the state championship so we have all played on the big stage.”

Team captains Twehous and Connor Brumfield have had the most impact. Twehous leads all pitchers with five starts of which he won four. Twehous also maintained a .338 batting average in his 72 at bats thus far. Twehous’ co-captain, Brumfield, leads all batters with a .493 batting average and 22 Runs Batted In (RBIs).

“I feel we have a really good shot to make a big run in the playoffs,” Twehous said. “Everyone has a level of confidence where we feel we belong with the best of them.”

Twehous’ confidence is echoed throughout the team, but Towe tries not to let the team get ahead of themselves.

“Our one team goal every year is to win a district championship. Our dream is to win state,” Towe said. “You can’t dream until you reach your goal.”

Golf ready to repeat as state champs after sectionals win

With season winding down, track shifts focus to districts