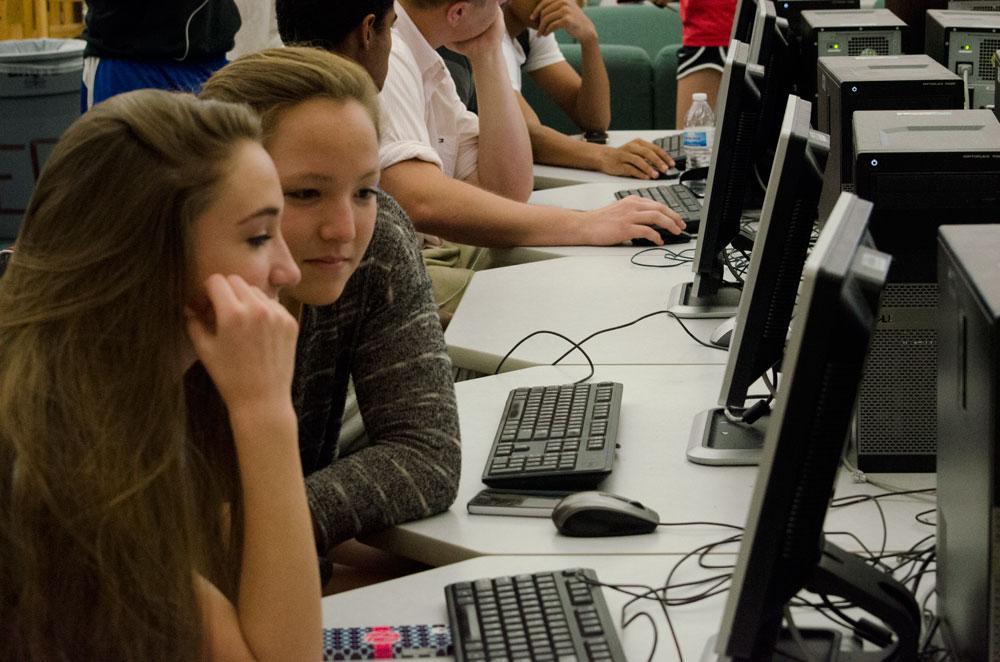 As the school year draws to a close, the RBHS class of 2018 takes a look back on their first year of high school.

The move from middle school to high school is a huge step. To freshman students coming to huge school like Rock Bridge for the first time can be exciting, scary, nerve-wracking, often a combination of all three. Now, that freshman year is almost over, this year’s freshman class can remember their initial feelings about coming to RBHS and see how the reality of high school compared to their expectations.

“Coming into freshman year, I had high expectations for Rock Bridge,” freshman Lucy Kegley said. “Rock Bridge has a reputation for excelling in pretty much everything they do, so I was pretty excited to go there.”

But fellow freshman Addie Logsdon had some initial reservations about coming into a new school full of older students.

“I thought all the upperclassmen would not talk to you at all,” Logsdon said. “Then they ended up all being really nice.”

This school year marks only the second year freshmen have been at the high school buildings. While the administration was busy working out kinks in the schedules, like establishing the expectations for bruin block or adding AUT for sophomores next year, the freshman class was busy adjusting to life as high schoolers. Which meant learning to navigate the halls of RBHS, getting used to block scheduling, getting to know the faculty and meeting new friends.

After the initial adjustment to high school life, this year’s freshman class began to branch out and find their niche. This meant trying out for sports teams or joining clubs.

“My favorite memory of this year was playing in the championship basketball game against Timberland in the Timberland tournament,” freshman Evan Ratermann said. “The fans were mean, and it was a tough game, and when we won on a buzzer beater, it was crazy.”

Freshman Bailey Devlin, a three-sport athlete, also says her favorite memories of this school year have come from being part of athletic teams and bonding with her teammates. “When I went with the track team to Kentucky I became really close to Caroline Stevens, who is now my best friend,” Devlin said. “On the way home, we stopped at Burger King and so many funny things happened while we were there, like a family of 15 people walked in wearing onesies.”

While athletics may be a big part of the RBHS experience for some, another big aspect of RBHS culture is “Freedom with Responsibility,” which a huge change from the more restrictive middle school setting.

“My favorite thing about Rock Bridge is having more freedom,” says Logsdon. Being able to hang out wherever she wants in the school is an aspect of life at RBHS that sticks out to her.

When freedom is increased, freshmen must learn for themselves how to be responsible and use their time wisely.

“I didn’t realize how much responsibility there was needed to stay on top of everything,” Devlin said. “I also didn’t know how time consuming school and sports would be.”

Nearly finished with freshman year, the class of 2018 has learned some lessons along the way and acquired some wisdom to pass on.

Kegley, a member of the softball team and band, said “My advice to incoming freshman is to get involved. Whether it be sports or after school clubs, you’ll meet some awesome people, and it gives you a great sense of school pride.”

Ratermann, a member of the football and basketball teams, also thinks getting involved is important. “I’d tell incoming freshman to not be afraid to branch out. I wish I had known to be more active in the school and join more clubs,” he said.

As freshmen look back on this year, they also take time to look toward their future and their next three years at Rock Bridge.

“I hope to accomplish moving towards my educational goals and expanding my knowledge,” Ratermann said. “So I’ll be ready for the next step in my educational career.”

Devlin wants to maintain good grades while continuing to be highly involved in sports. But those aren’t the only things she plans to do.

“I’m looking forward to meeting so many different people and making more friends during my next three years at Rock Bridge,” she said. She hopes to achieve this by joining more clubs and continuing to participate in sports.

Over the course of this year, “My opinions [of Rock Bridge] haven’t changed,” Kegley said. “I still think Rock Bridge is a pretty cool place.”