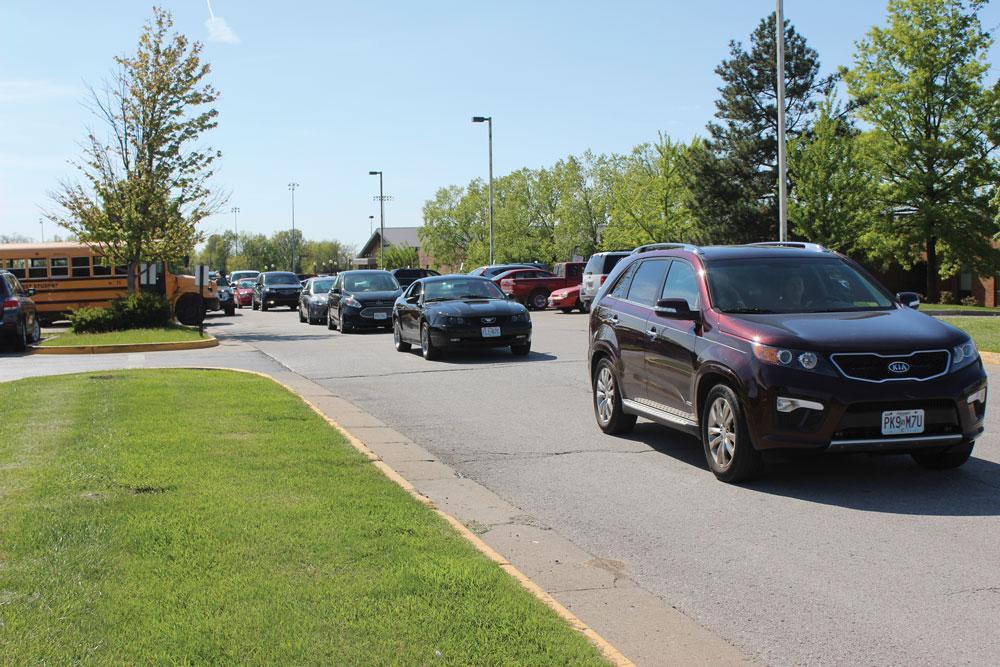 Tomorrow, seniors will exit the RBHS parking lot for the last time as high school students.
The loss of 477 students will decrease the amount of student drivers and traffic in the RBHS parking lots, making accidents less likely in the coming weeks. However, not only this year, but in years past, accidents involving student drivers have been an issue.
“In my experience, the most dangerous place for a teen driver is in the school parking lot,” State Farm insurance agent Mary Contreras said.
This school year marks the first time in recent years sophomores have been allowed to purchase parking passes. This has not only increased the sheer number of students parking in the lots but has also increased the number of inexperienced drivers at RBHS.
As the year has gone on, the number of students parking in the lots has increased. More and more sophomores have turned 16, gotten their licenses, and begun driving to school.
This means at the end of the school year, before the seniors leave, the lots are at their busiest. When traffic is heavy, there is a higher risk for car accidents.
Teens are 50 percent more likely to crash in their first month of driving than they are after their first year of driving, according to the AAA Foundation for Traffic Safety.
However, RBHS parking lot attendant Darryl Heaton does not believe sophomores have contributed to more accidents than any other grade.
“I think sophomores, once you’ve got your driver’s license, you’re just as capable as anybody else,” Heaton said. He adds that this year, as far as accidents that have been reported to the school, only one has involved a sophomore.
But what about accidents that are not reported to the school? The Rock surveyed 11 percent of students who have parking passes, and found 65 percent had been involved in at least one accident. Of those accidents, only 21 percent were reported.
When someone has been the victim of a hit and run, he or she has to turn to the school to help track down the culprit.
This situation happened to junior Dayna Linneman this fall. When she returned to her car parked near the CACC at the end of the day, she was surprised to find her back bumper dented, one of her tail lights damaged and the person who hit her long gone.
“I was very upset,” Linneman said. “It’s crazy to think someone could cause so much damage and just leave the problem for me and my family to take care of.”
Linneman reported the incident to Keisha Edwards, the school resource officer, but was unable to discover who hit her car. Linneman ended up having to have her bumper replaced, and since the perpetrator was never found, her family was stuck paying the entire bill.
“Although the school did all they could checking cameras, it’s still disappointing knowing I’ll never know who did it. I know I’m not the only one who has had their car damaged,” Linneman said. “I think as for how the school handles these situations, they’re doing the best they can. It’s so frustrating when these things happen, but there’s not much else we can do.”
The school policy on accidents can be found on the student parking application. The policy states: “Vehicle accidents and other parking lot safety concerns are to be reported to the main office and the school resource officer. RBHS is not responsible for vehicle damage that may occur in the parking lot but students are responsible for damages they cause.”
“We’ve been very fortunate,” Heaton said, “From the start of the year, we’ve had several very honest students that were involved in accidents and reported it.”
There are several steps the school can take to try and find the transgressor, including checking the cameras and trying to find student or faculty witnesses, sometimes utilizing social media to do so, Heaton said.
When students apply for parking passes, they must provide information on the make, model and color of their vehicle, as well as provide their license plate numbers. This information is kept on file so when reviewing footage, a vehicle can be traced to the owner.
Assistant principal Brian Gaub said RBHS has about 90 cameras, but most are located inside the building. He adds that getting enough cameras to see all of the parking lots would be not only difficult but also expensive.
“I know they did rework the camera system this past year,” Gaub said. “I do not know of any recent plans to add more.”