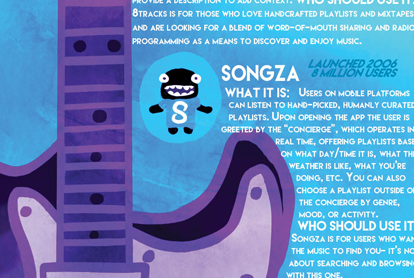 The current age of music streaming has made things easier than ever for both listeners and explorers of all things music. By being able to listen to any track anywhere at any time without having to pay for each individual song makes for a listener’s paradise.

“I think with the widespread easy access and cheap access to all the music that you could ever want has created a culture that fully relies on music,” RBHS pop culture teacher Ben Schirmer said.

Music streaming has even been used as a teaching tool at RBHS, with teachers such as Carrie Stephenson using Spotify to keep her art students entertained and inspired.

“In art we listen to music all of the time,” Stephenson said. “It helps us to get into the zone, and it also helps to create emotion.”

For art room 317, it’s a staple to have music playing, and it helps that Spotify can keep things interesting.

“In my AP class, one of my students came in and put on New Orleans jazz, and it was really cool,” Stephenson said. “It just helps to make a classroom community instead of everyone listening to music with headphones.”

The growing trend in streaming has lead to many services clawing their way into the scene.

With all of these new different services, it might seem too hectic to even pick one, especially on the low budget of a high schooler.

Thankfully, three major services have come to the forefront. Spotify, Beats Music and Tidal are currently at the top, but each definitely has its own pros and cons.

[pullquote]”It just helps to make a classroom community instead of everyone listening to music with headphones.” —Carrie Stephenson, art teacher[/pullquote]Having a selection of music at a little over 20 million songs, Spotify is great, especially since each is available in the free version. The difference between that and the pay-to-listen version is the free version has ads, but considering they are rather spaced out, it is a fair price to pay. Having the money for premium is very nice, as it features completely ad-free music.

Freshman Max Simmons has been using Spotify Premium for almost a year now.

“I just enjoy how easy it is,” Simmons said. “I don’t have to buy any songs anymore, and that’s really helpful.”
Simmons decided to use the upgraded service when Spotify offered a one month free trial.

“It was such a huge difference, really, because on the free version you can’t really listen to one specific song,” he said. “Now I can listen to whatever I want with no ads.”

Either way it’s access to an amazing way to discover new artists and songs through great playlists made by users and even the artists themselves. The iPhone app is easy to use and can quickly move from one artist to another. Spotify allows users be social, too, helping to share and receive playlists with anyone. At the universal price of $9.99 per month for the premium version, it’s quite clear as to why Spotify is the most popular in the industry.

Spotify has still seen stiff competition from newcomers to the game. Beats Music has created a service with essentially all of the same features and abilities for the same price. With a selection of 20 million songs and a great curation system, Beats Music is actually the winner between itself and Spotify for the premium $9.99 per month package.

Being able to get music playlists curated by both the artists and music reviewers from everyone between Rolling Stone and Pitchfork, Beats Music is the best of the three at introducing the public to new music. It’s iPhone app is incredibly easy to use, making it convenient to share playlists with friends and even the world.

Sophomore Lydia Thompson is a Beats Music user and uses the app constantly to listen to her favorite songs.

“The app makes it really easy for me to listen to whatever I want,” Thompson said. “It also helps that it’s paid for with my family plan, so I don’t use anything else to listen to music now except for Beats.”

Its catch, though, is how much longer it will exist. Both Beats Music and Tidal are owned by Apple, and many have speculated that if the company had to decide between the two, it would go for the brand new baby, Tidal. Either way the app is expected to receive a complete makeover this summer, so who is to say that won’t keep it alive.

It might seem like bringing even another company into the mix of streaming services would be too much, but that’s exactly what Tidal owner Jay-Z did. The brand new service is based completely around artists and their likes. The artists’ playlists help fans to learn even more about their favorite bands.

To add on to that, it’s the first of the music streaming services to use the Free Lossless Audio Codec (FLAC) format, making for better sound quality without cutting down on the load time. People might think the service is already working with a great system, but Apple added onto the package even more with tens of thousands of ready to stream music videos in HD.

Freshman Trey Robinson was excited to try Tidal when it first came out, but bad reviews from friends made him think otherwise.
“I really wanted to try it out, but all my friends who tried it felt like it was just like everything else,” Robinson said. “I just feel like they are trying to make it seem so cool with all of these famous artists behind it, but it’s really nothing special.”

For anyone wanting to stream music, there is a huge array of options. Each service has it’s own perks and problems, but they are all leading to a future where buying music will be reserved for having no internet connection. Schirmer sees this future coming very soon.

“The CD is done; the cassette has been done for a while,” he said. “There’s really no reason to buy a physical copy of something anymore, and that’s happening to downloading songs, too.”

Warming up after depression’s chilly touch