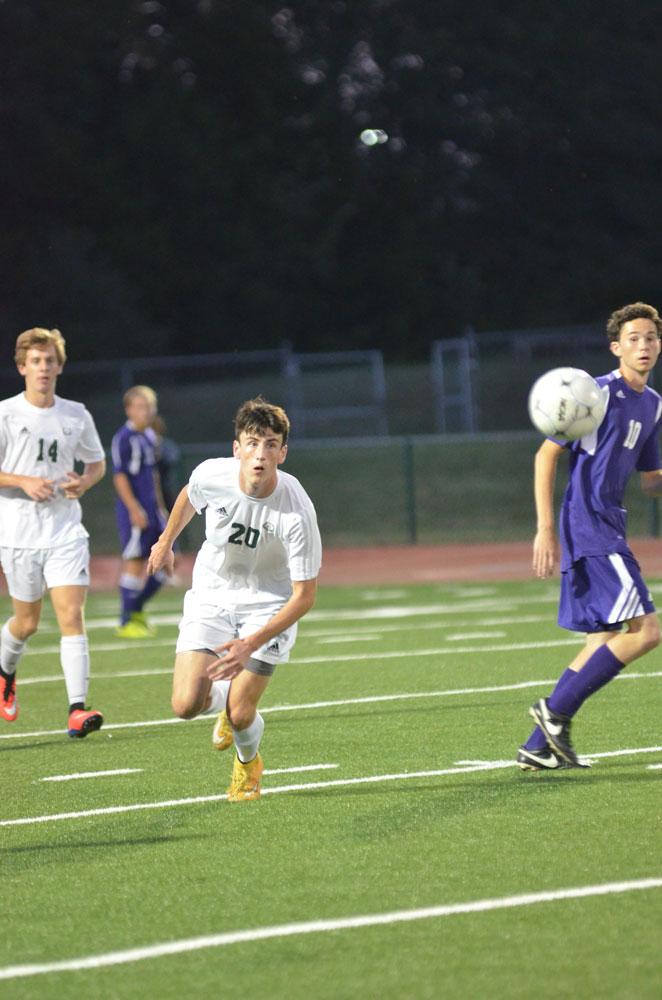 [dropcap style=”flat”]T[/dropcap]he wound that the RBHS boys soccer team suffered after two disheartening losses to bitter crosstown rival Hickman last season only festered after the Bruins (8-1-1) were handed their first defeat of the season by a score of 0-2 to the Kewpies (9-0) on their home field  when the two undefeated, top ten squads battled last night in their annual regular season meeting, dubbed the “El Clasicomo”.

HHS entered the game ranked 5th in the state according to maxpreps.com and held bragging rights after dispatching of the Bruins by way of penalty shootout in their last regular season matchup and taking the district title during the two teams’ second meeting a month later in the 2014 season. RBHS, ranked 6th in the state by maxpreps.com, was eager to avenge last year’s losses and take back the coveted title as Columbia’s best high school soccer team.

Senior defender and co-captain Jonah Lage understood the severity of the matchup and that it would be one of the most critical games of the season for both teams, a lesson second year head coach Scott Wittenborn stressed to his team in the moments leading up to the game.

“[Coach Wittenborn] told us multiple times this is going to be one of the toughest games we play all year,” Lage said, “not just because they’re good, but because it’s an undefeated rivalry game.”

And Wittenborn’s prediction bore true as the game represented why both teams were so highly ranked as both displayed outstanding individual and team play from the first to final whistle, whether it be the Kewpies spectacular build-up play in the midfield to senior Tarnue Tyler’s blazing fast cuts leading to numerous chances for the Bruins. But, along with the beauty also came the beast. Jostling for position quickly turned into pushing and shoving with mangled messes of arms and legs bringing down a score of bodies whilst expletives rang throughout the pitch, causing for both teams to have their gripes about the way the referee was handling the game.

“I definitely was getting upset with the calls, but referees are unpredictable so I try to not let it play with my emotions,” Lage said. “Overall there were bad calls both ways…”

The officiating wasn’t the only thing RBHS dealt with in the early going as they were tasked with minimizing Hickman’s dangerous, high powered aerial attack, an aspect of the Kewpies game that had become its most menacing, and would result in their first goal after a free kick was headed home by the towering Sam Hosmer-Quint with just a minute and fifty-four seconds remaining in the first half.

“Coming into the game we knew their dominance in the air off set pieces was something we needed to stop,” junior forward Brandon Rettke said. “We knew that they would aim for Sam Hosmer-Quint, but we just got an unlucky break on the first goal.”

With RBHS down 0-1 at halftime Wittenborn could be heard barking instructions and adjustments to his players, clearly upset with his team’s first forty minutes.

“He told us to be more physical on set pieces and to let [Hickman] know you’re there,” Rettke said. “[He said] to just calm down and play the type of soccer where we got our opportunities and to always try and vary the attack.”

And just ten minutes into the second half junior Drew Stanowski would get one of the Bruin’s best opportunities after hitting the ball sweetly off of his right foot from ten yards out, but Stanowski’s effort would turn into nothing more than just another save for Hickman goalkeeper Jacob Gunn.

And if Gunn’s hands were what lay RBHS’s undefeated record to rest then Ryan Fox’s 78th minute goal would be the nail in the coffin, notching a 2-0 lead for the Kewpies and ending the Bruin’s dream of an unbeaten season. But where some would see despair, Lage sees the loss as more of a relief.

“Losing a game definitely took a bunch of pressure off of our shoulders as a team,” Lage said, “because we were so worried about impressing everyone and fitting the standards of a top ranked team in the nation.”

And with the likelihood of a rematch looming as the district tournament creeps closer, both Lage and Rettke are confident that they can win when it matters most.

“I believe this loss will push us even harder and let us take a step back and realize we have got to slow things down and take it one game at a time,” Rettke said, “but in the back of all our heads we’re just looking forward to the rematch in districts.”

The Bruins will next be in action on September 22nd when they travel to Illinois to face the Edwardsville Tigers, and will look to improve on how they get ready mentally before heading out onto the pitch.

“I’ve been pleased this season with my teammates and there’s always things we can work on,” Lage said, “but a major one that I would like us to improve is being able to get everyone in the zone and turned up to 3rd gear by the time the whistle blows for game time.”

Should the two teams meet in the District Tournament, who do you think will win?  Let us know below in the comments.

Words on Words: Exploring the facets of disappointment

Boys’ soccer gearing up for districts

Soccer looks to improve against MHS

Way to keep the term “el clasicomo” alive, I’m very proud of you.