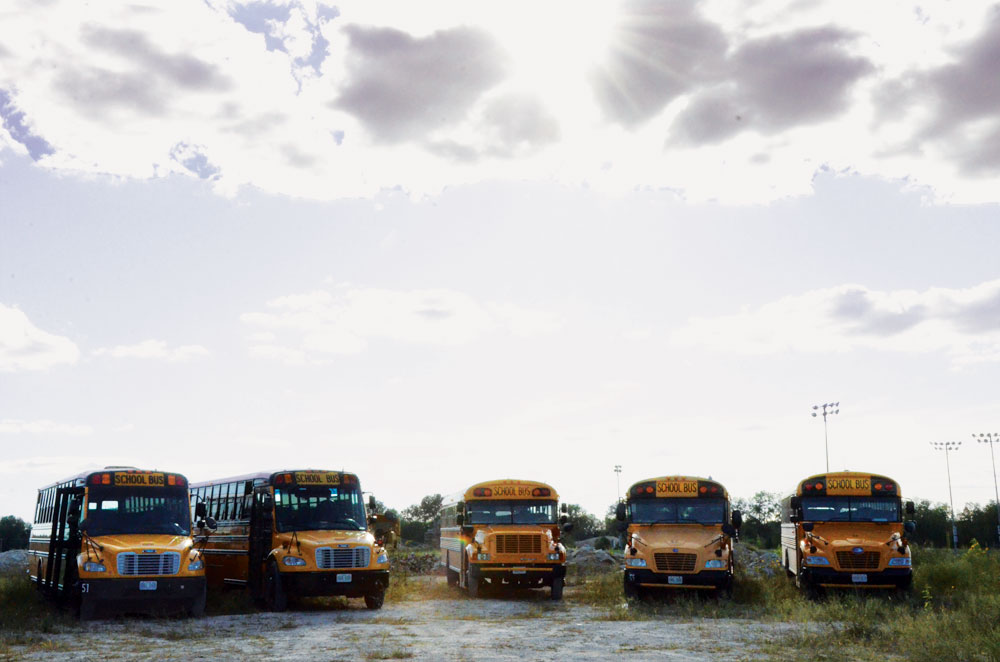 Buses are prepared to pick up students after school. The recent change of bus companies has sparked frustration for students and parents. Photo by Cassi Viox

On Nov. 10, 2014, the Columbia Public Schools District hired a new bus company for student transportation for the first time in decades.

“From our school’s standpoint, we see a lot of similarities,” assistant principal Brian Gaub said. “All of their buses are new and have a lot of the same drivers.”  Gaub said a big reason why Student Transportation of America was hired for this school year was due to a lower contracted price the company offered. “What I recall is that the contracted price for Student Transportation of America is a little bit less,” Gaub said. “I actually believe that we won’t notice a lot of difference. As far as I can tell right now, it seems similar to previous years,” Gaub said.

However, there is controversy among students who ride these buses regarding the quality of this year’s bus transportation. The main issue with the buses is that they have had many late arrivals this year, which frustrates a number students, teachers and parents alike.

“My bus driver quit on the first week of school, leaving my bus of … people stranded,” Long said. “After he quit, the bus barn decided to split up our route. They got a sub driver, but he has to drop off elementary school kids first, so he is always late picking us up. We have been late every single day since the second week of school, which creates problems. Being late causes a distraction when we enter our first class. The teacher has to re-explain the lesson to the kids who are late, which is frustrating to them.”

Long said the problems the buses create are irritating.

“It’s really frustrating to me because I don’t know when to get to the bus stop because our sub gets there at different times each day,” Long said. “When I get to school, I’m always rushing to get to class because I’m always late. I feel like I don’t have time to catch my breath because the teacher had to explain to me whatever he or she just explained to the class. I get really frustrated at times and I think they need to fix it.”

Fortunately, bus 247 has recently received a new driver and is now running on time to school.

However, the problem is still not completely gone. For the buses still arriving late, it also creates the issue regarding students having to deal with missing class.

Although students are excused by their attendance secretary, the frequent late arrivals cause them to lose time at school. This is detrimental to their academic performance and students must use their free time to catch up.

There also lies an issue with the possibility of a bus break-down on out-of-town trips. Student Transportation of America is not well-established in Missouri, so if a bus happens to break down on an out-of-town trip, there is little chance of a back-up bus arriving on time.

“When you get to the state line, I don’t know how established they are in Kansas or Illinois, but I’m guessing for some of those bus breakdowns, that bus would actually have to originate here, or you also mentioned Springfield,” Gaub said.

Student Transportation of America won the bid to be the school’s new transportation provider. The bus company placed a successful bid of $53.2 million. First Student, which had provided transportation to the school district for approximately four decades, had a bid of $55.4 million.

Student Transportation of America was contacted to see what their view on the issue was, however, they were unavailable.

School administrators assure students that the late buses are only because of drivers adjusting to the new school year and will soon be a thing of the past.

Gaub said the buses will stop being late with time, as drivers and the transportation system get used to pick-up times and get routes figured out.

“At the beginning of the year, late buses are more prevalent until they get the bus routes more figured out, so we’re kind of used to that because it has been an issue every year, ” Gaub said. “Once things get going, late buses aren’t very common anymore.”

In conclusion, STA’s bus service has caused issues with students this year regarding arrival times. Some buses, such as bus 247, no longer have the problem, but those who are still facing it want a quick solution.

“It’s affecting my schedule,” Reed said. “I’d really enjoy coming to school early enough, so I can see my friends and eat without having to go straight to class because everyone likes that little space before class starts.”