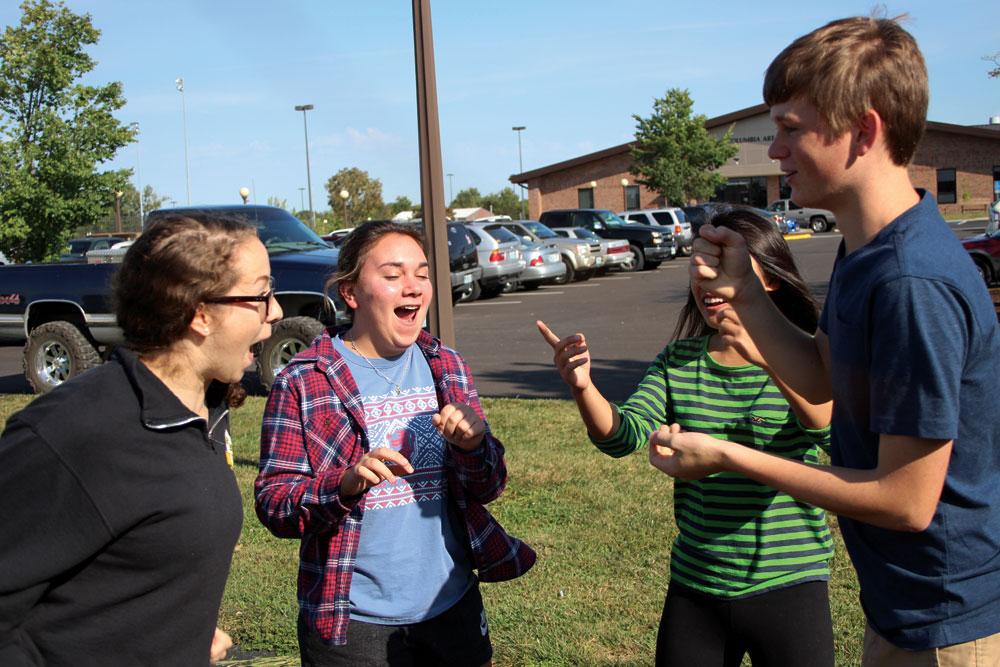 AP Biology students Mariah Fitzpatrick, Clara Brand, Hannah Chen and Clayton Warder mingle with each other during a break from class. This year, administrators requested teachers to add more physical activity during classes this year. Photo by Jae Rhee

The words of sophomore Tracey Singer’s biology teacher faded in the back of her mind as she dozed off in the middle of class. It was hard to stay focused on one subject for more than an hour and a half, so she was grateful when her teacher called for a break. Although the break was only five minutes long, Singer and the rest of her classmates returned feeling refreshed and stimulated to learn.

This year, RBHS teachers have started incorporating exercise intermissions in their daily class routines. Acting principal Kathy Ritter, who is currently filling in for Dr. Jennifer Rukstad while she is on maternity leave, said the idea of exercise in class was put into action when speaker Frank Kros told the school administrators about how the brain operates. Kros is the president of The Upside Down Organization, which strives to improve learning through applying neuroscience elements to the classroom. He spoke to RBHS officials about the impacts of exercise on the mind.

“We found that being active helps to really stimulate the brain and helps with the growth of certain chemicals,” Ritter said. “There’s a chemical reaction that exercise helps. It’s just like things we know; getting a good night’s sleep, eating nutritious foods, but also, moving about and being academically stimulated both help the brain function at a higher level.”

Ritter said administrators recommended exercising in class to teachers but didn’t require it because some classrooms lend themselves more easily to movement than others. Teachers were told to look for ways that, in a five-minute period, they could have students up and moving about.

The activities teachers are including are simple motor skill exercises. Singer, said her chemistry, biology and Spanish teachers typically make her class walk around the school for an average of five minutes.

“It makes class more interesting and enjoyable,” Singer said. “I fall asleep way too often, and walking around wakes me up and freshens my interest in learning.”

However, not all RBHS teachers are doing this. Singer says she would really like it if her AP world teachers implemented the practice into their class. She feels that in such a demanding environment with no breaks in the schedule, keeping focus can be extremely difficult for the entire hour.

Ninth grade civics studies and AP psychology teacher Austin Reed tries to get his students moving in simple ways like placing handouts at the front of the classroom and allowing them to get up and stretch their legs. Reed has been purposeful about getting his students to move around in class over the years, saying he never just wants to talk at kids for 90 minutes straight.

“If they’re anything like me they get bored sitting for long periods, so I think getting the blood moving around a little bit helps brain activity,” Reed said. “Hopefully this year we see a change across the board.”