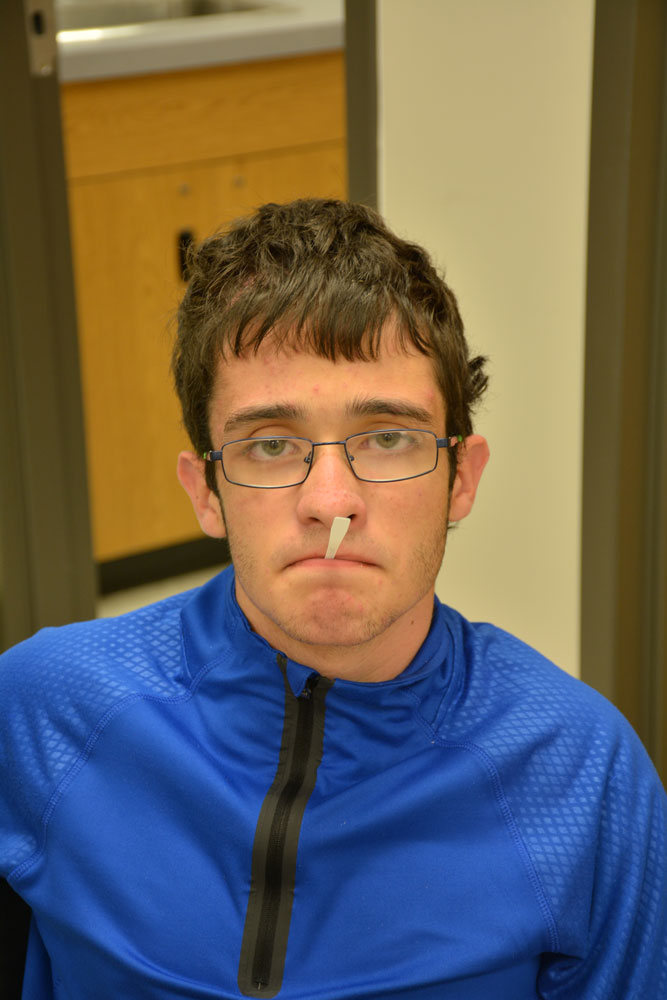 The bright morning of Oct. 2 sharply contrasted junior Jarrah Crites’ dark mood as she drove into Sonic. She had woken up that day with a massive headache and decided to take her boyfriend’s advice to drink a lot of water.The only reason she was going to school was to avoid the stress that came with trying to catch up with all the work she might’ve missed.

Unfortunately, Crites isn’t the only one who comes to school sick. Statistics from cbsnews say that 90 percent of people go to work sick, even when they know they are contagious. This in turn can lead to an epidemic, such as the outbreak of fever and vomiting that sent home hundreds in Person County, North Carolina  this September. Crites believes that missing school isn’t worth the stress, even if it’s better for her health.

“If you miss school while you’re sick then you have this stress on you of ‘Oh God!’ what if I miss something? I’m going to have to stress about getting that caught up in time as well as every other thing that I have,” Crites said. ”If you come [to school] and you’re sick [and] you go home with all of your homework then there isn’t as much stress on you about having to get the work.”

“If [students] come to school sick, first of all I would say, ‘Stay home; you don’t have to come if you’re sick,’”  Proffitt said. “If someone isn’t feeling connected to the class and if you are so sick that you can’t really absorb or get anything out of the classroom environment anyway, it’s probably best to stay home.”

Proffitt uses a google document in order to keep students who are out because of illness informed about the class. The document has the daily activities listed out as well as any links and homework assignments. She believes students should take action themselves when it comes to communicating with teachers about missed work.

“If it’s just a normal sickness then you can email or contact classroom teachers not just at the beginning of class the next day you get back. That’s always a time we’re going crazy trying to get everything ready for the day and make sure that our class is getting started,”  Proffitt said. “So anytime you can get in touch before the next class period that you are there is a good idea.”

School nurse Tammy Adkins sees the cold and seasons pop up generally October through to March. The worse of the flu season in past years has been December, but Adkins says that’s not the only time epidemics are present in RBHS.

“[There’s more sickness] when school starts because you’re all together more than you were through the summer, so you pass germs more,” Adkins said. “So colds happen and with a building this big we really always have something going around.”

However if a student is frequently sick or sick for a long time simply looking at an online document and washing their hands may not suffice. Junior Paul Kindling has experienced the impacts of long term sickness because of his asthma flare ups in the fall and spring.

“Through the nurse in guidance there’s a 504 system for students who are sick often or have an illness that’s going to mean that they’re going to miss a lot of school or specific events,” Kindling said “I’ve been a part of that now so that kind of helps me with the nurse to be able to talk to my teachers a little bit better and to cooperate with them to figure out when I can make up assignments and what assignments I need to make up.”

Proffitt also agrees that a different approach should be taken when dealing with students who are gone for an extended period of time.

“[If a student is gone longer than a couple of days] then it’s an individual thing, usually it’s like we meet over an AUT and we put together a plan for them to make stuff up when they can.” Proffitt said.

Kindling believes even though being sick can disrupt one’s schedule it is important to remember that being proactive is key when it comes to keeping up with school.

“On a personal basis I’ve fallen behind a little bit with cooperating with my teachers but in general with the 504 system and with being sick I don’t really feel as long as you are being proactive and talking to your teachers that you necessarily need to fall behind,” Kindling said “I feel like you can keep up.”

Parents express concern for drug use

This is a good feature to write since it’s so relevant. Also, I feel like everyone can really relate to this. As I read the story, I was becoming increasingly more interested in it mainly due to the fact that I was finding quotes and anecdotes that I could really relate to.

This story did a nice job explaining the stresses of students. I totally agree with most students when they say that they would go to school when their sick because they don’t want the extra work when coming back. I think that the CBS fact/survey added a nice touch to the story by showing that going to work/school sick, is a very common thing.

This story is very relate able to many teenagers as getting sick is a common thing especially as we hit these winter months. It is also very agreeable that students may not want to stay home because the stress that will come along with missing school work. I think this story does a nice job of explaining the stress some students are put under when feeling sick. The quotes also help to support and back of what students may deal with.