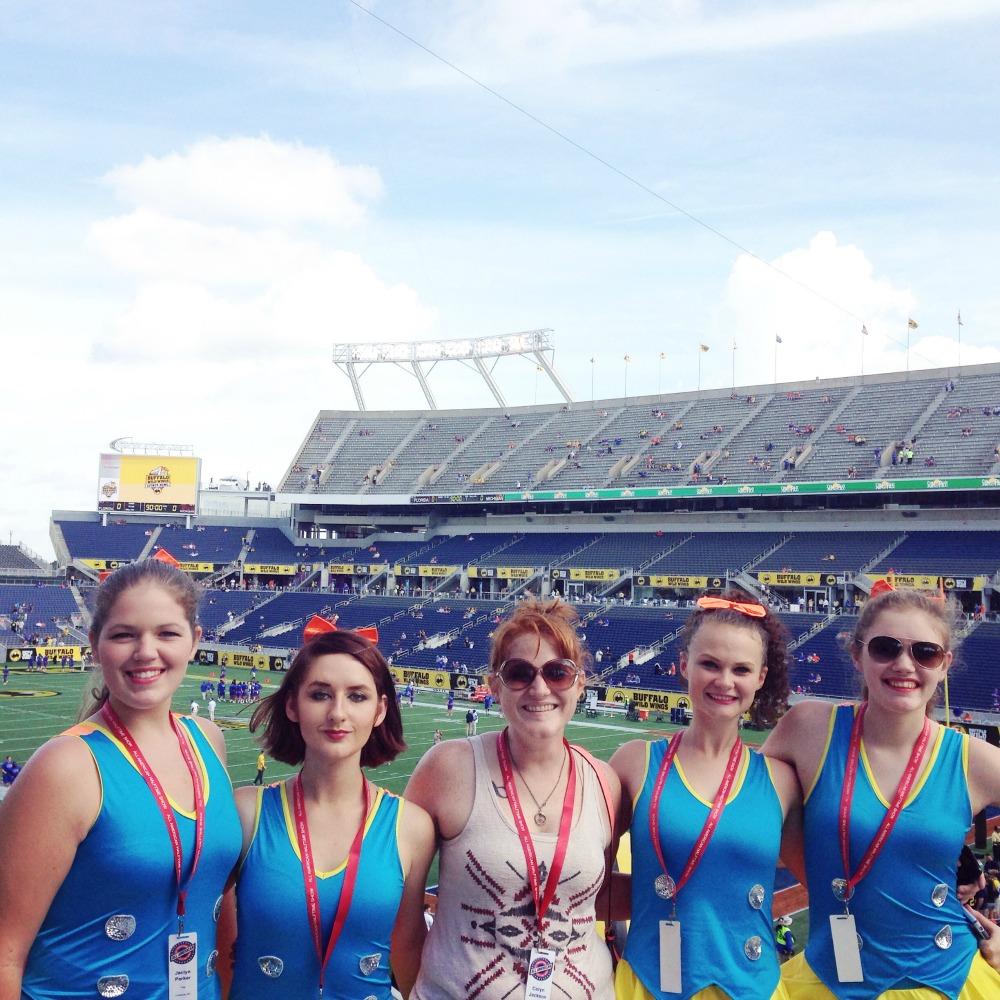 Taking it in: Seniors Jacie Parker, Rachael Ostempowski, coach Caryn Jackson, Ember Yates, and Melissa Blake (junior Linnaea Roberson not pictured) pose at the Orlando Citrus Bowl Stadium in Orlando, Florida. There, the five girls and other selectees performed in front of a crowd of 65,000 people during Citrus Bowl halftime show.

[dropcap style=”flat” size=”2″]F[/dropcap]or senior Melissa Blake, watching girls twirl billowing flags through the air in parades was a thing of magic. She would stare wide-eyed at the TV screen, wishing she could one day stand in their shoes. Then, in her freshman year, her long lived dream became reality when she attended her first spin class.

“I always wanted to be one of the girls in a parade spinning a flag around so I started going to after school spin clinics freshmen year,” Blake said. “I got hooked and am always trying to learn bigger and better things.”

However, the glitz and glitter of performing comes with a price. The guard does routine stretches, dance, flag technique, body conditioning and practices their sequences to perfection.

“We will literally practice the same spot over and over and over. ‘Just one more time,’ is a common phrase,” guard instructor Caryn Jackson said. “For the marching season, we practice before school everyday and once or twice a week after school. We [also] practice plenty throughout the summer, with our own week camp before the two week band camp. The guard works extremely hard, [but] all the time is worth it for a great show and for the bond you make with your team.”

When another color guard instructor told Jackson about auditions for the Citrus Bowl held on January 1 in Orlando, FL, the Bowl tour director selected 10 color guard members to perform.

“I found out about the Citrus Bowl performance through another color guard instructor. She let me know of the audition procedures and I talked it over with Mr. Mathews and Mr. Sullivan. They thought it would be a really cool experience,” Jackson said. “The girls did a video audition over band camp, and the results were made from that one video performance. I’m proud to say nearly the whole team of 10 were selected, and five were able to make the trip.”

Once they decided to go, more practice ensued.

“We held several after school practices for the bowl game. The tour sent a choreography DVD, so we put it on the big screen in the band room and studied it,” Jackson said. “They studied the choreography for about three weeks before the trip, and even were going over the written work in the car on the way down. One day of the trip was entirely devoted to rehearsal in the hot Florida sun.”

When it was finally time to perform, senior Ember Yates, a guard for two years now, felt the familiar nervous energy sweep through her, this time intensified by the boisterous crowd surrounding her.

[quote cite=”Ember Yates, senior”][The crowd was] bigger than we’ve ever performed for before. We just kind of had to be ready to jump for it.[/quote]

“It was really scary. When it was time to perform during halftime, there were about 15 cameramen walking around on the field taking pictures and videos,” Yates said. “I was also scared because [out of] everyone that was performing, we only got to practice the routine [together] for one day, so I was worried on how it would look to everyone else.”

Despite her initial nerves, the cheerful faces and excited energy around her made the anxiety vanish by the end of the performance.

“I felt accomplished after it was over. After hearing the crowd go crazy I had the biggest smile,” Yates said. “I was proud that everyone who was there remembered their work and recovered fast if they forgot what to do.”

While the guard usually performs at parades, competition shows and pre-shows to football games, Blake was shocked by the crowd of 65,000 at the Citrus Bowl.

“It was a huge crowd. In a sold out football stadium [there are] 65,000 people,” Blake said. “[The crowd was] bigger than we’ve ever performed for before. We just kind of had to be ready to jump for it.”

Despite the hard work that came with it, in Blake’s eyes, performing at the Citrus Bowl was like living out her dream.

“We practiced a couple times the week before but everything else was preparing on our own because we all got DVDs of the choreography in the mail,” Blake said. “It was definitely the best experience we have had together as a guard. It was phenomenal.”

Because of experiences like this and other events that the guard performs at, Yates believes anyone can find enjoyment in being a part of their team.

“I’d advise anyone who is interested in doing something fun and active to join color guard. It’s only half a semester and you’re able to travel and meet new friends inside and outside the band,” Yates said. “Even though it looks hard, once you get the hang of it it’s not too bad. People are actually amazed [at] how you can toss and catch a flag without hitting yourself. It’s a pretty fun experience.”

Have you ever been to the Citrus Bowl? Leave a comment below!