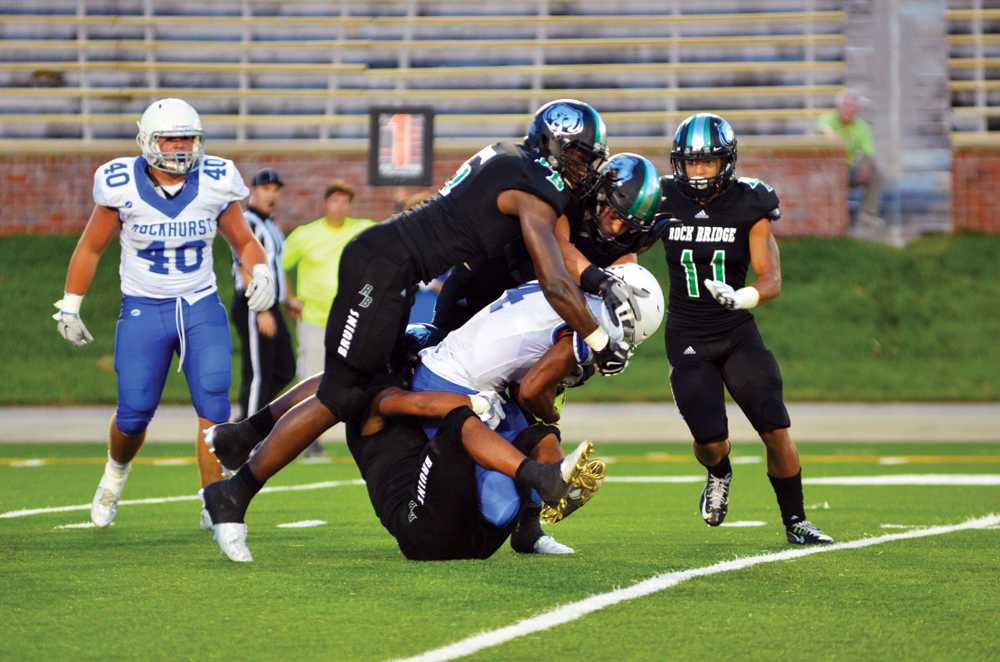 A group of Bruins tackle a Rockhurst player Aug. 24. on Faurot Field in a 26-7 loss. Although targeting isn’t a factor in high school football, it has been a hot-button issue in both the college and professional ranks.

Head injuries in football are an increasingly common topic of debate. Undoubtedly, head and neck injuries, especially concussions, are both dangerous and scary. But, the actions made by the National Collegiate Athletic Association (NCAA) and the National Football League (NFL) were not measures that drastically improved this issue. Instead, the new policies offer a false sense of security while hurting teams more than helping them.

In the 2015 season, the NCAA introduced the targeting penalty. The rule was simple: any play involving the use of the crown (top) of the helmet was illegal, as was contact to the head or neck area of a defenseless opponent. The penalty for such an action was a 15-yard penalty against the team, and the ejection of the player.

At its surface, the rule seems to improve the safety of players. This simply isn’t the case. In fact, there were 23 more concussions reported in 2015 than 2014, meaning that the addition of the rule did not decrease the number of head injuries in college football.

Instead of improving player safety, which obviously did not happen after the addition of the rule, the new penalty actually hurt teams and players rather than accomplishing its actual purpose. Two glaring instances come to mind.

Joey Bosa for Ohio State University and Terry Beckner Jr. for the University of Missouri are two premier defensive players in the country. Both were ejected from games because of this rule even though neither inflicted harm to the player nor displayed any malicious intent.

Bosa tackled a player in the chest, nowhere close to the head. But, because he led with the crown of the helmet, he was ejected. In Beckner Jr’s. hit, very similar to Nebraska’s Nate Gerry, his helmet barely grazed the quarterback’s facemask.

Again, there was never a risk for injury or malicious intent. In another occasion, Joe Bolden of Michigan State made “illegal” contact with an offensive player because that player was sliding. Bolden’s tackle would have been legal and executed properly, but, because the height of the offensive player rapidly changed, the tackle drew a penalty.

While these penalties cost teams a valuable 15 yards while also ejecting players from games, other players are victims of violent and brutal head injuries, but there is no punishment.

For example, Dominique Reed of Arkansas was viciously tackled, but because he was not “defenseless” there was no penalty. It could not be more obvious that the defensive player was leading with his head and force head-to-head contact, meaning the helmet of the instigating player hits the helmet of the opposing player, a common cause for concussions and neck injuries.

Why are players and teams being penalized for doing nothing truly harmful, yet this player received no punishment?

The NFL has had a targeting rule similar to its collegiate counterpart, for the past three seasons, but its enforcement was inconsistent and controversial. The league attempted to reclarify the rule and further protect players by introducing an “unnecessary roughness” element to the rule.

As its namesake might suggest, the unnecesaary roughness rule penalizes players who use the crown of the helmet to make a tackle, or make helmet-to-helmet contact.

At the surface, the rule seems beneficial, but referees have no idea how to enforce it.
In the American Football Conference (AFC) championship game, Denver Broncos safety Shiloh Keo properly tackled New England Patriots receiver Julian Edelman. As Edelman made the catch, however, his head-level lowered, which led to an incidental helmet-to-helmet situation.

Keo was penalized costing his team 15 valuable yards.The week before, in an AFC divisional game, Patriots wide-receiver Danny Amendola viciously hit Kansas City Chiefs cornerback Jamell Fleming.
Fleming was, in every sense of the word, defenseless. Amendola was penalized but not ejected despite making an obvious attempt to make a helmet-to-helmet hit.

By rule, Keo’s tackle was rightfully penalized. But similar to the collegiate situation, there was no intent to harm and no chance of injury.

On the other hand, Amendola should have been ejected. His hit was a pitcuresque example of the targeting rule. To make matters worse, the Patriots were penalized only two yards because of the location of the penalty on the field.

Amendola could have induced a tragic concussion on an opposing player, and as punishment, the team took five whole steps back. Man, you guys really showed them there, NFL.

If the NCAA and NFL care about player safety and health, they should probably start making some rules that actually decrease the number of head injuries, rather than penalizing the innocent and continuing to watch head and neck injuries occur on its watch.