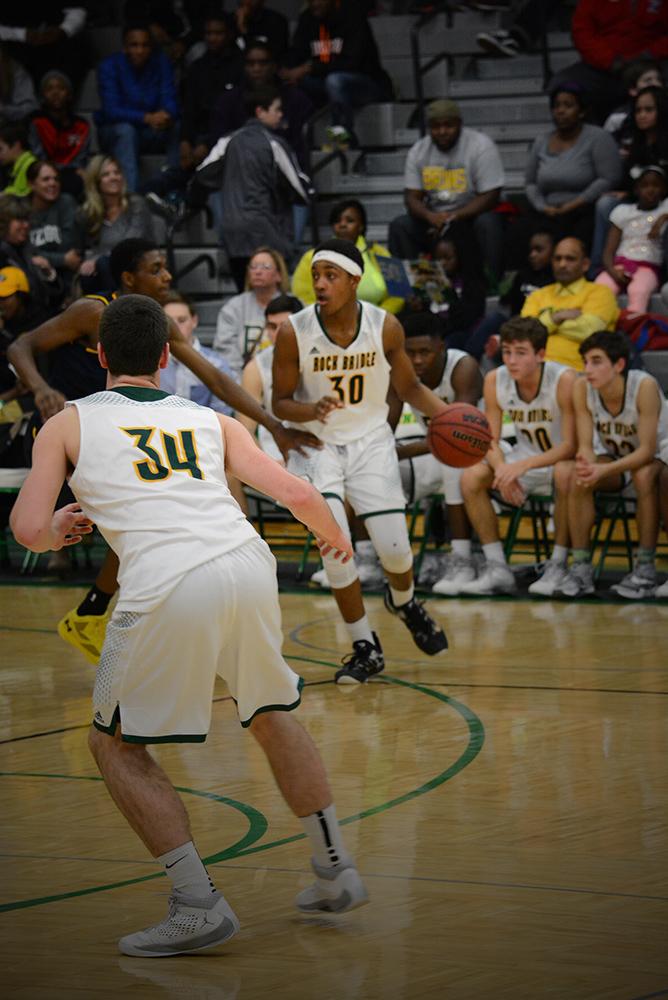 The Bruins wrapped up an impressive regular season at home on Friday night. RBHS, hosting the Crusaders of Helias in the regular season finale, looked to extend their winning streak to seven consecutive victories.

The RBHS offense started off sluggishly in the first quarter, while the Helias offense, powered by accurate perimeter shooters, found its groove. It was the Cooper brothers, junior guard Jack and freshman guard Ben, who kept RBHS within striking distance.

With just over two minutes remaining in the first quarter, RBHS found itself trailing 13-8, six of which were triples splashed by the younger brother. Persistent defense and a more balanced offense, combined with a buzzer-beating three-pointer at the end of the first quarter from the older Cooper, tied the game at 15.

“I just had an open look in the corner and shot it,” Jack Cooper said. “I knew the clock was winding down, but I didn’t think about it too much because I didn’t want to rush the shot.”

The Bruins carried the early momentum into the second quarter. Utilizing the the athleticism and strength of RBHS post players, senior Tre Williams and junior Eysan Wiley created issues for the Crusaders. By collecting second-chance opportunities via offensive rebounds, and forcing Helias to consistently take contested shots, the Bruins captured a 31-26 advantage going into the intermission.

In the third quarter, the Bruin lead fluctuated, as the teams traded blows. Offensively, Williams and Wiley had their way in the paint. Nevertheless, the sharpshooting Crusaders kept the game close. At the beginning of the fourth quarter, RBHS held onto a slim 42-39 lead.

“Even though it was a close game, we all had confidence,” Williams said. “We were getting a lot of rebounds and playing good defense, so we had confidence as a team.”

With just under two minutes remaining, Helias regained the lead as the Bruins stalled offensively. An and-one layup from Williams, however, led to a 50-48 RBHS lead.

With about 90 seconds remaining, Helias held possession, looking for an open perimeter shot. With 48 seconds left, the Crusaders executed, tying the game at 51 apiece.

“He just made the shot,” Wiley said. “But we all knew that we had to score and get a stop, and we had the confidence that we could get the job done.”

As the pressure mounted in the dwindling seconds, Williams got better. He took control offensively, coolly knocking down three free throws in the final 30 seconds; a moment that Ben Cooper called “a key moment in the game.”

RBHS got defensive stops and splashed big shots when most needed, while Helias failed to do the same. At the conclusion of an exciting 32 minutes, RBHS pulled out a 56-51 victory.

“We played together as a team tonight and played pretty good defense,” Ben Cooper said. “If we carry the teamwork and defense that we showed tonight to districts, then we will be in good shape.”

The Bruins look to carry the momentum into the district tournament where they enter as the top seed. On Tuesday, they will play the winner of Hickman and Smith-Cotton.

Age of sexting ushers in age of harrassment