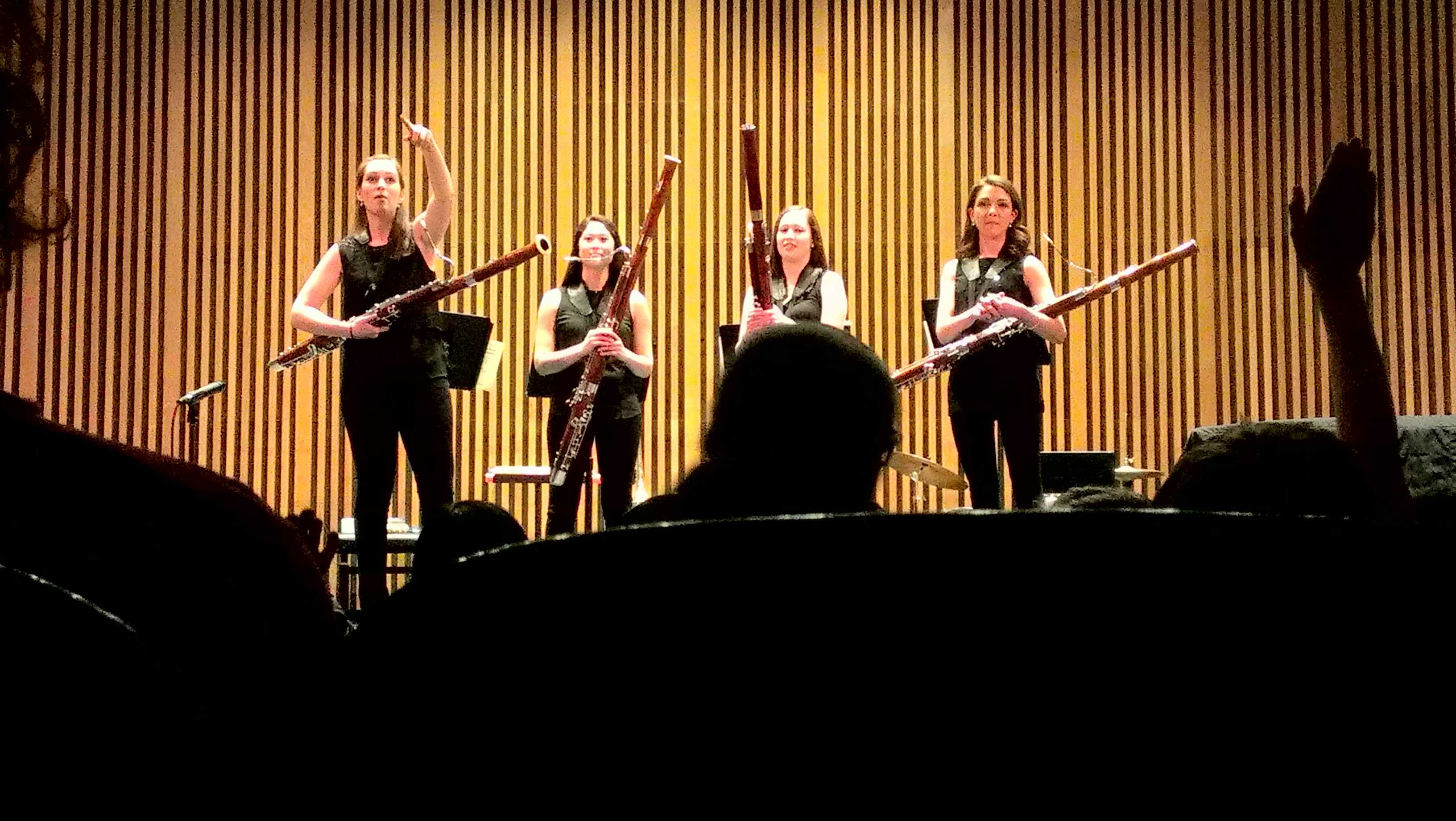 The Breaking Winds Bassoon Quartet blew all of my expectations out of the water, including my belief that I was marching through cold campus streets to see a group of oboes. It was an honest mistake. My band director had been encouraging us to go watch them for a while, but I’ve never claimed to listen to teachers very well.

Once inside Whitmore Recital Hall, I was joined by excited people of every age. Kids in elementary school joined high schoolers and college students. By the beginning of the performance, most of the theatre was full, eager to hear the unusual grouping of instruments.

The performance was original from the start, the four bassoonists beginning with the intro to the universal theme song from off stage. Immediately playing it up, they held notes out for excessively long lengths of time, becoming red in the face and dramatically dropping to their knees. I was in love and they were fantastic.

In their first song, the “Overture to Ruslan and Ludmilla”, Yuki Katayama had handfuls of broken reeds pelted at her by fellow bassoonist, Brittany Harrington-Smith, only to be saved by the gift of a new reed from Director of the MU School of Music, Julia Gaines. The cheesy slow motion running just made the performance better.

Following songs commenced in a similar vein. The performers threw rose petals and blew bubbles in “Disney Princess Party.” “Barnum and Bailey’s favorite” had a kazoo feature, along with Lauren Yu Ziemba playing the Melodica. She would later pick up the Trombone for “Tiger Rag”.

Two of the pieces featured the MU Bassoon Ensemble, which Breaking Winds member Kara LaMoure directs. The set was finished with “Lady Gaga Saga”, complete with a costume change.

There was never a dull moment, even when playing serious arrangements of songs, such as their beautiful Prelude from Bach’s “Cello Suite No. 1 in G major”. Listening to their more musical pieces helped me to understand why people love the Bassoon so much.

Breaking Winds’ performance was not only hilarious, but also skillful. All of the members played together flawlessly, which was even more impressive after finding out the women don’t practice together regularly.

Each member comes from a different part of the States — New York, San Francisco, Dallas, and Columbia. These musicians aren’t able to get together to run through pieces like most small ensembles. Instead, as LaMoure revealed, they typically only practice together before performances or tours.

Breaking Winds is a breath of fresh air in the world of instrumental music. These four musicians have toured across the globe, playing in Hong Kong, China and Japan. They are one of the most entertaining and talented groups currently performing. They don’t take themselves too seriously and are therefore able to connect with a wide audience base.

The Breaking Winds also have an active social media presence. Their YouTube channel has nearly 8,000 followers and their facebook page has garnered 3.5K likes. In a world where classical music is going out of style, groups like the Breaking Winds may be what we need to get more kids interested in band and orchestra and to keep the music alive.

Shelby plays the French Horn, Trombone, Mellophone, draws, and is learning to juggle. Her dream is to graduate from college with no debt, get a job in the degree she majored in, and proceed to live a fulfilling life. Her back-up plan is to join the circus. If anyone has any tips on juggling/balloon tying/taming lions, contact her.