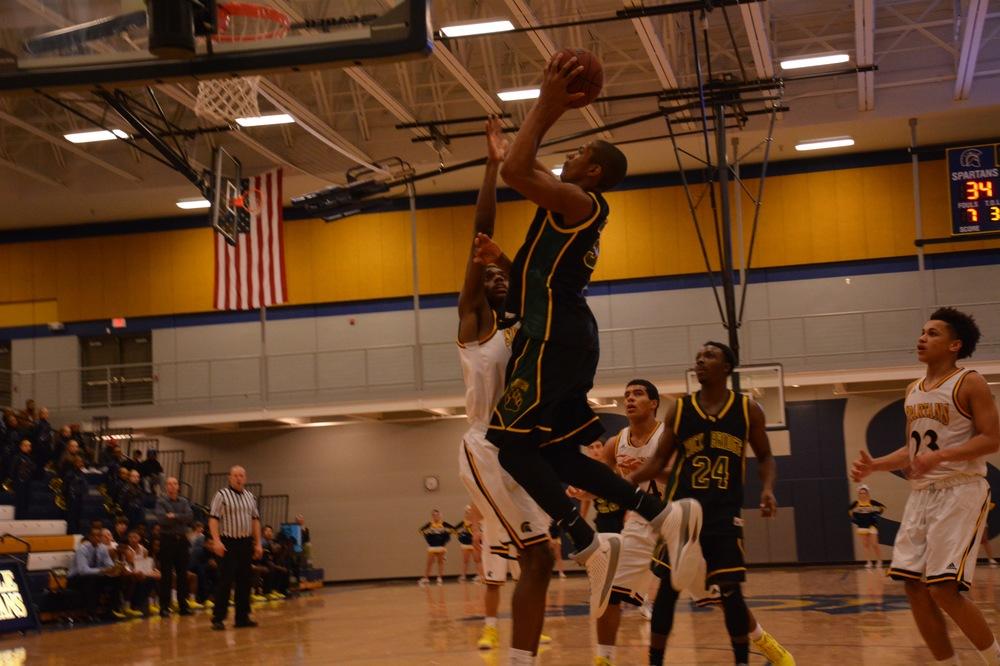 Junior Eysan Wiley goes up for a layup in a game against Battle High School. Although Wiley was held in check against Jefferson City, the game was an important one for the RBHS transfer.

After starting out strong, RBHS hit a rough patch midseason. The Bruins, however, have been able to regain their footing following a trio of successful tournaments. RBHS continued its 2015-16 campaign on Feb. 2, as the team traveled to the state’s capital in a highly anticipated match against rival Jefferson City.

The Bruins exhibited aggressive defense throughout the entire first quarter, complemented by a highly efficient offensive performance. At the conclusion of the first intermission, RBHS led the Jays 16-6.

“We had a mindset to play with a lot of energy right from the tip-off,” senior forward Carson England said. “I think we did that pretty well. We played well on both sides of the ball.”

The fast pace and unmerciful scoring continued in the second quarter, as the Bruins coasted into halftime with a 34-16 advantage.

In previous games, senior forward Tre Williams and junior forward Eysan Wiley had led the team in scoring. It was, however, two freshmen guards that led the RBHS attack.

“Me and [freshman] Ben [Cooper] were just in a rhythm,” freshman guard Isiaih Mosley said about the performances of himself and his teammate. “It was just one of those days where everything was clicking offensively.”

The Bruins started the second half the same way they started the first. Erupting out of halftime with a 9-2 run, the Bruins extended their lead to a 43-18 margin.

Heading into the fourth quarter, RBHS boasted a 53-25 advantage. Finishing the game on a 12-4 run, the Bruins dismantled the Jays, 65-29.

Although it was a quiet night for him, the game was an influential one for Wiley, who transferred to RBHS from JC last year.

“I had to keep my emotions controlled and just do my job,” Wiley said. “But it definitely helps when your team blows out your rival like that.”

The game was also important for senior forward Karson Ringdahl, not only because it may have been his last time stepping onto the court against a rival, but also because of his long history with the Jays. Ringdahl, who quarterbacks the RBHS football team, suffered a broken leg against Jefferson City during football season.

“I tried to forget about the injury and just focus on the game,” Ringdahl said. “At the end of the day, a win’s a win, and it’s especially nice against a team like that.”

Illusions: taking a turn for the worst