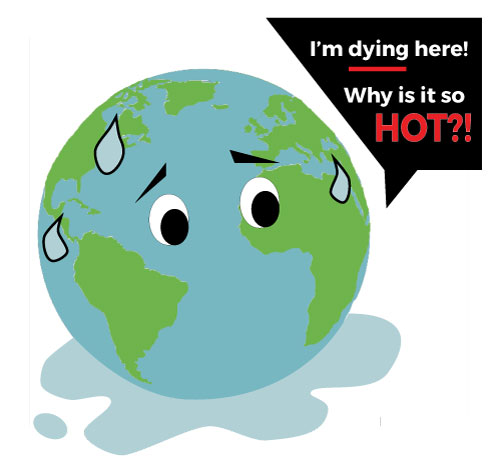 The landscape of our city, our state, our country and our world has completely and radically changed over the last several decades. In the city of Columbia alone, there are more cars, more buildings and more signs of an industrialized city than before. The same trend can be easily seen in the aforementioned regions as well. If these changes in everyday life are so obvious, it is time for everyone to notice a trend that is just as obvious, but far more dangerous and detrimental: global warming.

Climate change, global warming, the world heating up, whatever you want to call it; it is absolutely an issue, and that’s coming from a Republican. Highly acclaimed and respected organizations who are masters in their fields of work, including NASA and the United Nations, have reported the increased average temperatures and the melting ice caps. Arguing with people is easy, but arguing with cold, hard statistics is not.

Still some argue that the increased warmth of the world is not a phenomenon caused by humans. They claim that solar activity, such as the length of solar cycles, solar wind, galactic cosmic rays and sunspots have made the sun more potent, thus making the earth warmer. They also argue that, although climate change may be a result of humans, it is not the pollution created by humans. Instead, the carbon dioxide produced by humans is the real cause of global warming.

Essentially, the sun, which is currently about 10,000 degrees, is getting hotter. These people may be using non-meltable thermometers to calculate the temperature spike, but how do you determine if something that is extremely hot is getting hot? Furthermore, people aren’t the cause of global warming, people are. In simpler terms, it’s not what people are doing (the cars, the fossil fuels, the gases, the smokestacks, etc.) it’s what people are doing (breathing). Not only are those arguments impossible to defend, they simply don’t make sense.

In 2012, the world used 529 quadrillion British thermal units of energy, which is equivalent to 411 quintillion foot-pounds. Basically, this means that if you put all of the energy used in 2012 in a box and put it on top of your foot, it would take 411 (with 18 zeros) to move that box twelve inches. Considering that the amount of energy used grows annually, there is a final accumulation of lots and lots of energy. There is no disputing that that much energy, which releases an enormous amount of carbon dioxide and other pollutants, did not have anything to do with the change in climate.

The arguments for and against global warming and climate change have been raging on for far too long. It’s time for one side to use some common sense and realize the global issue that is literally surrounding us. It is very obvious that humans are making an impact on the earth’s environment. This isn’t an issue that can be changed on a dime. Instead, it requires individuals making small changes, and encouraging their peers to also make small changes, in order to achieve a necessary goal.

I think global warming is an important and growing issue. We need to take global warming seriously and start changing how we live so that Earth remains our home. I think some people are just not aware of how our world is changing, this issue needs to be addressed more often and more seriously.

I think it’s important to address important issues like the current global changes occurring as well as climate issues. I liked how the info graphic was interactive and you could hover over the specific area to gain information on how the world is being affected through global warming.