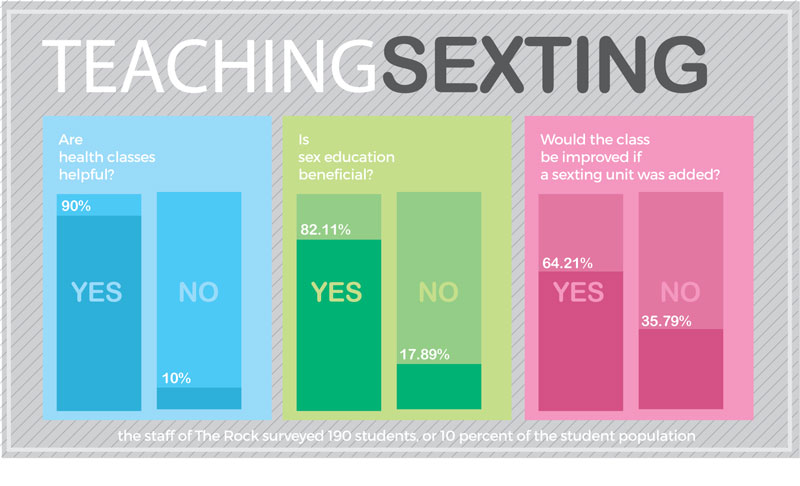 Six months after Gov. Jay Nixon signed HB 501, a bill that required public schools to add information about sexting and online predators to their sex education curriculum, and threw sex education classes across Missouri into uncharted waters, Health Education instructor Wendy Sheehan said she has not made any significant changes to her lessons, which already addressed such issues.

“At RBHS [sexting] is brought up when talking about healthy/unhealthy relationship traits, as well as sexual harassment,” Sheehan said. “We use a handout called Terminology Regarding Abuse – what do these terms mean? This handout requires students to use a website called Love Is Respect.  Digital abuse is a part of this handout.”

Sheehan said although sex education teachers usually address sexting during middle school classes, she had previously incorporated a unit on online sexual behavior into her curriculum and even plans to address the issue with more depth this semester.

“This semester, we plan to hit [sexting] a little harder,” Sheehan said. “[We will] especially [include] reminders about the damage that can occur. There is also a handout I plan to share as an informational piece.”

Freshman Dylan Hancock, who took Sheehan’s health class last semester, said they spent about a week and a half going over the dangers of engaging with strangers on the internet.

“We talked about when you’re texting and things like that, sometimes things can go a little too far and you can start to talk about things that might not be appropriate,” Hancock said. “Really you should try to stay away from that type of stuff.”

Rep. Genise Montecillo, who sponsored the bill that led to the law, said she added an element to sex education that was previously lacking.

“It’s important to educate young people with the information they need to protect themselves from online risks,” Montecillo said.

Sheehan said sexting is a practice with repercussions that many students fail to grasp, with students even engaging in inappropriate digital behavior on school grounds.

“Students don’t take it seriously, don’t think it would happen to them, don’t think they will get caught or could be damaged by it, don’t see it as a big deal or a big problem, “ Sheehan said. “I know in another class, a student was asked to not have her phone out because the teacher saw the student taking pictures of herself in what could be perceived in an inappropriate manner.”

Though none of the sexting and digital predator information presented in Sheehan’s class surprised Hancock, he still said the unit’s inclusion in the curriculum was important for students as a whole.

“You already kind of know that, ‘Yeah, I can’t do this,’ or ‘I should know not to do that,’” Hancock said. “Most people should know that information but some people don’t get the concept that [digital sexual activity] can ruin or scar them for life.”

As a former teacher, Montecillo said she is fully aware of how often teenagers send messages or pictures they quickly regret. She said her teaching experience was a large influence on her eventual sponsorship of the bill.

“I witnessed students caught up in online situations that they were not equipped to handle,” Montecillo said.

Given that HB 501 marks the first legislation in over a decade that advances sexual education in Missouri, Montecillo believes that state-wide sexual health curriculum as a whole needs significant improvements.

“I believe we need comprehensive sex education,” Montecillo said. “ [Students] should know how to protect themselves from unplanned pregnancies and STDs.”