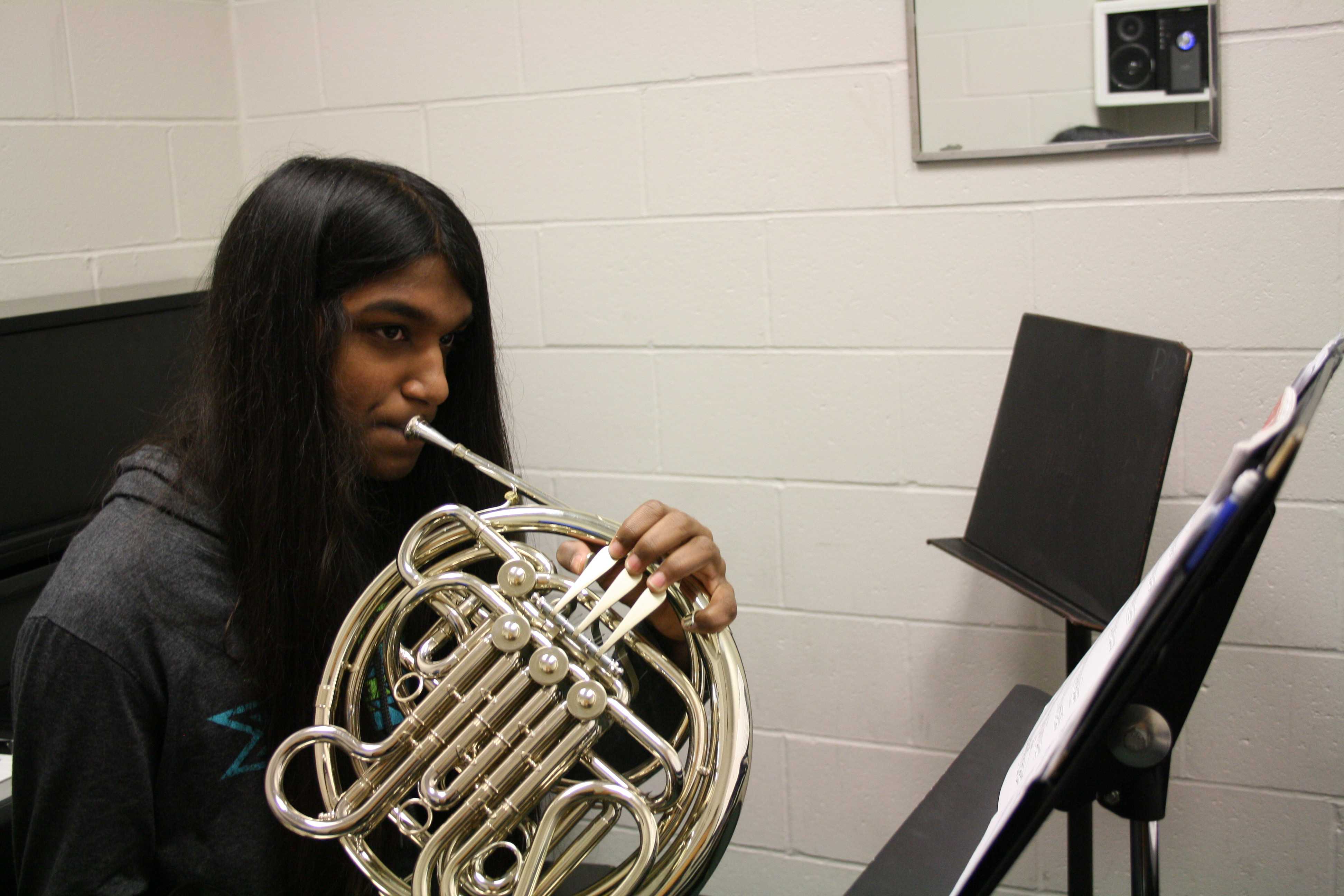 With the recent letdown of Golden Cow being cancelled, students can look forward to Capers, the school talent show being held at 7:00 p.m. on Thursday, April 21 in the Performing Arts Center. Even though auditions are Wednesday and Thursday, March 23-24, several students are already excitedly preparing their acts.

One of those people is sophomore Dilan Kurukulasuriya, who is planning on performing a French horn medley of Phantom of the Opera with his friends. He said although the music is simple, putting it all together is the difficult, yet fun, part.

“I’m just going into it with confidence and thinking of it more as just another practice rather than playing in front of a bunch of people,” Kurukulasuriya said. “Sometimes thinking too much about anything other than the music can mess you up when you’re playing. Also, I’m going to be up there with a bunch of friends, so we can help each other get through it if that happens.”

Talent show organizer and band director Patrick Sullivan said his favorite part of the process is getting to see what students come up with for their acts. Sullivan, who co-coordinates Capers with fellow band director Steve Matthews, believes high school students are extremely creative and good at considering their audience when developing their acts.

“We have seen some wild and crazy things at auditions,” Sullivan said, “and these acts are always encouraged.”

Like Kurukulasuriya, freshman Jackson Dampier will also be performing in a band ensemble group for Capers. Dampier, who plays the trumpet, and approximately 20 other people have put together a Hawaii Five-0 themed piece. He hopes to perform at Capers again next year if his peers can put together another group.

“I enjoy performing in front of my teachers and peers in a group setting, but not so much by myself,” Dampier said. “I have enjoyed just playing music with the people I feel most comfortable around.”

A French horn solo doesn’t sound as appealing as playing with a group to Kurukulasuriya, and he would also like to try out for the talent show again next year if he and his friends can organize something like this again. Although Sullivan loves watching the musical students perform, he also appreciates acts from those who are not enrolled in a music class.

“Don’t get me wrong, I love our music students here at Rock Bridge,” Sullivan said. “But it is cool to see non-music students showing off their skills at the guitar, piano, or in a band, a comedy routine, a glow in the dark hula-hoop-er, the list goes on and on.”

Afghanistan struggles made real for audiences of ‘Land of the Enlightened’

What a day at the True/False Film Fest looks like

I think talent shows are a good way for the school body to be able to go see their classmates perform in whatever form of an act. I enjoy the variety of talents performed that may range from tricks, to music, to anything in between. They always seem to be fun and interesting to watch, so I definitely look forward to this years talent show considering the cancellation of Golden Cow.