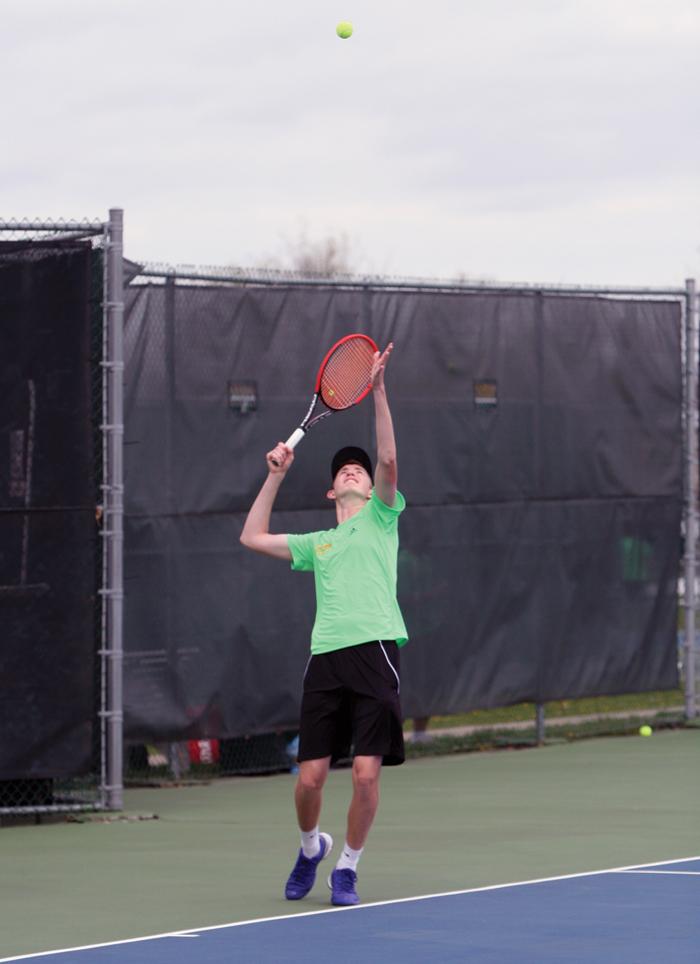 It was clear that their matchup with Park Hill being rescheduled from Wednesday to last night was no issue for the boys’ tennis team (17-2) as they made quick work of the Trojans, 9-0, on their home court at Bethel Park.

The Bruins faced their longest break of the season after inclement weather forced the match to be moved back two days, making it six days since the team played an organized game having taken second at the Tournament of Champions on April 23. For junior John Swift, the match’s bump from its original date served as an extra day of practice for the squad, giving them more time to work on their weaknesses.

“We cancelled it in the morning before the meet due to the forecast,” Swift said, “but it ended up not even raining so it was basically just another day of practice for the guys. It really gave us a chance to keep improving as we come closer to the postseason.”

And that improvement was seen early and often against the Trojans (14-2-1) as RBHS dominated in both doubles and singles play. Freshman Kam Farid cites the team’s close knit bond as a factor in their success throughout the course of the season.

“We’ve all known each other for a long time and we have hit together a lot, both varsity and JV,” Farid said. “Knowing each of us have our own unique talents and having to face that in practice has really prepared us to the best we can be when we face our opponents.”

With only one match left before the Bruins begin postseason play, focus has shifted for RBHS, who are now more locked in than ever.

“We all work very well together as a team and we’re able to overcome tough adversity with ease,” Freshman Kavin Anand said. “If we keep our intensity up during our practices and maintain a competitive attitude I think we’ll do great in districts and at state.”

With being on the tennis team for RBHS comes great expectation as head coach Ben Loeb has taken the past 16 district titles and winning state titles in back-to-back years in 2012 and 2013. With the success so too comes a large target, with various teams across the state hoping to dethrone RBHS as one of the premier powers in the state.

“We realize that there are teams like Glendale that focus on trying to beat us in the postseason all season long and that lots of teams we play are going to throw everything but the kitchen sink at us, but we try to treat those matches just like any other match we play,” Swift said.  “I’d be lying if I said there aren’t any expectations for the team, but we try to take it one match at a time and focus on what we need to do now to be successful and I think that helps to take off some of the pressure that other put on us as well as the pressure we put on ourselves.”

The Bruins will have a tune-up against the Jeff City Jays away on May 4 before beginning the district tournament on May 9 at Bethel Park.

Will you be at the district tournament? Let us know in the comments below.