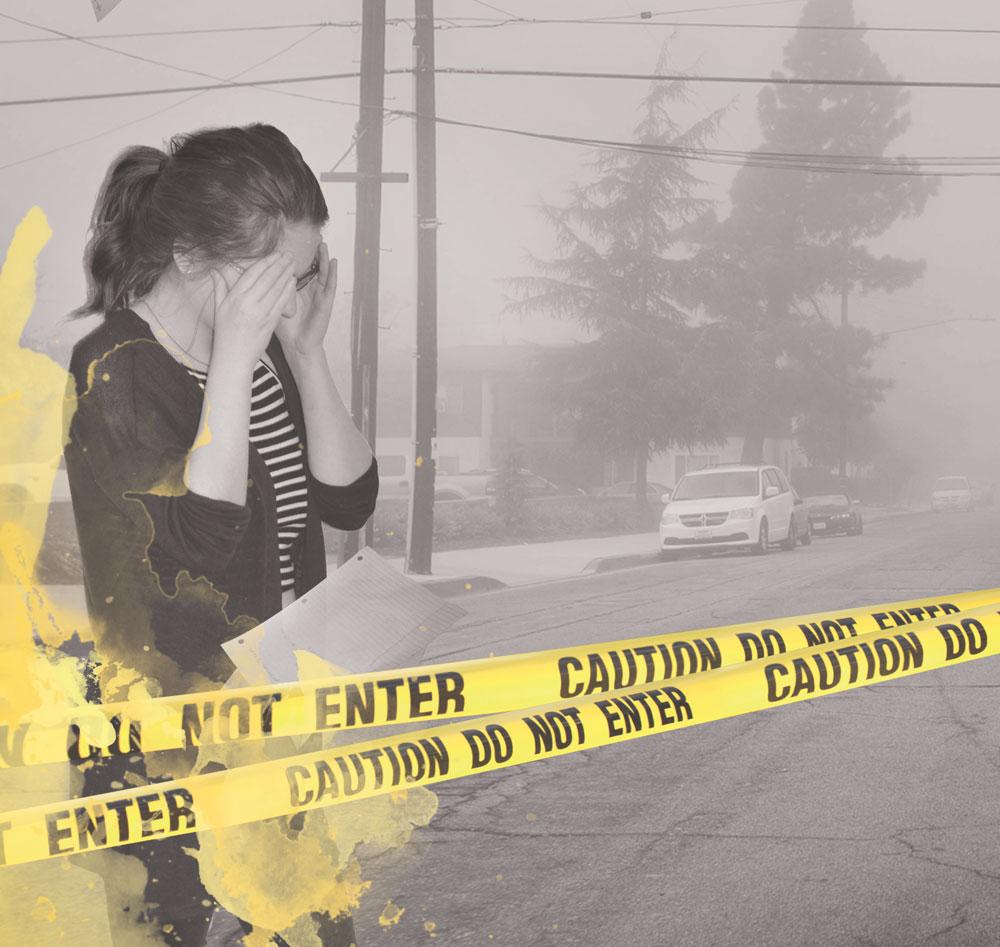 [heading]First in a six-part series covering the criminal justice system[/heading]It was her sophomore year when the burglary happened. Her garage door was open and a man was on the run from the police when he saw her house. In a second he ran into the garage, climbed into the driver’s seat of her mom’s car and drove off.

The theft wasn’t that bad of a crime. No one was injured, and although the car was worth a lot of money, everyone lived. Everyone was the same after the theft as they were before. Well, mostly.
“I had a hard time trying to understand why someone would do that,” senior Brooke Wooten said. “At night I would wake up two or three times to make sure that my family was still asleep [and] the doors were locked.”

Anxiety is one of the most common aftereffects of crime, according to the National Victim Assistance Academy. Even if they were never face-to-face with danger, victims feel anxious and are more susceptible to becoming depressed and developing post traumatic stress disorder if they suffer another trauma. The National Victim Assistance Academy said that those who suffer violent crimes, however, have an even more difficult time coping and often need help to feel protected again.

“Our primary concern for any and all victims is their safety and well-being. Healing begins with the response provided by any advocate,” Kathleen Tofall, the president of Missouri Victim Assistance Network or MOVA, said. “The Statewide Victim Advocate from the Missouri Office of Prosecution Services handles all calls that come to our 800 toll free number and she has significant knowledge of the county services across the state.”

MOVA is a nonprofit organization whose mission is to promote fair treatment for victims of crime. Tofall said the organization helps crime victims move past the trauma and begin setting their lives back up by helping them navigate legal matters and find local organizations.

“If a victim contacts us by the 800 number or by email, and they are reporting a crime, we will check to see if they reported the crime to their local police department. If so, then we review the Criminal Justice System process and their rights as victims as well as assist with safety planning and identifying their needs for appropriate referral to resources in their community,” Tofall said. “We offer information about Crime Victims’ Compensation, adult abuse orders of protection and, if an arrest has been made in their case, we will assist them with MOVA’s registration.”

Meg Garvin is the executive director of the National Crime Victim Law Institute. She said the work victim advocates do is extremely important, as there are not many people who are fighting for victims. NCVLI is one of the first of its kind, developed out of the need of victim advocacy in a world increasingly focused on the criminal.

“There are not many victims’ rights lawyers in the country. NCVLI was founded in the year 2000 to start to fill the gap because in that year, there were almost none,” Garvin said. “They came together and said, ‘How do we make sure there are trained lawyers that victims can access?’ NCVLI was originally created to do national demonstration projects and train up a bunch of lawyers and establish legal networks or legal clinics in a number of jurisdictions. Missouri was originally one of them.”

But this idealistic goal wasn’t easily met. The economy and budgeting led to a sharp decline of funds and NCVLI had to wait on their projects. Victims went without dedicated lawyers, sometimes not getting a fair trial as a result.

“Then federal funding dried up, and Congress, despite the fact that the federal Crime Victim Rights Act every year is reauthorized to say they will give money to legal services for victims of crime to protect their rights, does not fund us. They don’t fund legal services. So that iteration has been a real struggle,” Garvin said. “That said, there has been a movement in the recent few years where the federal office for victims of crime has started to issue grants to the country to help bolster legal services for victims. A number of jurisdictions now have lawyers that do this work, mostly coming out of legal aid organizations. Then NCVLI partners with those organizations to teach them this new piece of legal work because no one in law school learns how to do this. It’s not part of the curriculum.”

The work has been powerful, Garvin said. The Hollywood scene of a dramatic courtroom, full with the sound of the victim crying from the witness stand, the prosecutor asking them heartbreaking, soft questions and then turning to a loud, commanding voice during the cross-examination is, afterall, just make believe most of the time. The process of a trial may not even include the victim in some cases. NCVLI is trying to change this and make trials more about those damaged by the crime.

“If you picture the criminal courtroom, you picture the prosecution and the defense. You perceive the victim as, maybe at best, a witness in the case. They get called to the stand; they testify,” Garvin said. “More often than not, they’re sitting in the back of the courtroom or sometimes, they’re not even in the courtroom. The victim’s an afterthought. We aren’t trained, none of us. Whether it’s popular culture, whether it’s law school, it doesn’t matter, we simply are not in the habit of thinking of the victim having their own lawyer arguing things to the court in the criminal case.”

Wooten certainly knows what it feels like to be an afterthought. After her family’s car was stolen, they heard nothing. They never found the thief, and her family was left to wonder where he was and what he was up to with their hard-earned car.

“Once, the police came right after the car was stolen. They were helpful and told us about what the guy had done, but after that we never heard anything from the police,” Wooten said. “We tried to get updates and know what was going on, but trying to find the guy wasn’t really their top priority, and they basically blew us off. That’s when we became frustrated and [I] tried to let it go.”

While making the police track down a perpetrator is impossible, Garvin said victims do have certain rights. Missourians are granted 18 total rights as victims and witnesses of crimes under the Missouri Revised Statutes Section 595.209.1. Some of the major rights are the right to be present at all criminal justice proceedings the defendant is allowed to attend, the right to information about a crime and the right to reasonable protection from the defendant.

The unfortunate part is that many victims don’t know their rights and, therefore, do not utilize them, Garvin said.

“Thirty-three states have put victims’ rights in their constitution, and every state, as well as the federal system, has a statute that lists them. In most cases, there’s eight rights. So the challenge is to ask, ‘How many of you know your rights if you were stopped by the police if you were a defendant?’ My guess is 100 percent of you would be able to recite your Miranda rights, mostly because of TV,” Garvin said. “But then flip the coin and ask people, ‘How many of you could recite your victims’ rights?’ My guess is no one. There’s this great quote from Boutros Boutros-Gali, who used to be the head of the United Nations, saying that the first step in a human rights or civil rights movement is just knowing you have rights.”

In an attempt to spread awareness about victims’ rights, NCVLI holds conferences. This year, one of their major conferences will be on June 10 and 11.

“It’s a very cool conference because it’s the only one of its kind in the country. It’s a law conference designed for lawyers or legal advocates and we bring together about 250 attorneys and advocates from all segments of the criminal justice system,” Garvin said. “We talk about victim law and litigation strategies. We do some multidisciplinary pieces. So [for example], how does the neurobiology of trauma impact our legal services? How can we better understand survivors? It’s two days of really intensive review of how we protect victims’ rights and voices while ensuring we have a really sound justice system that respects everyone’s rights.”

Once people are aware of their rights, it’s time to use them. Garvin said there are a variety of concerns when working with a victim. Running straight to the police or to trial isn’t always what the victim wants. Sometimes they just need help getting protection.

“The main point of every time you’re talking with a survivor is finding out what they want and what they need. The first starting point is figuring out: Are they safe now? If not, then you have to triage that. You have to find them housing, stability, whatever it is they need,” Garvin said. “Then, you find out what else do they need? Some survivors want to report to law enforcement. Some do not, and, because we’re a human rights and a civil rights organization, our job is to make sure the victim has access to do what they want to do. If it means not reporting to law enforcement, then we just connect them with the social services that they need to move through their past.”

Tofall, who has been a MOVA member since 1989, said she believes in this work for many reasons. As a long-time victims’ rights activist, Tofall has truly found her calling at MOVA and loves being able to help those who might have otherwise struggled silently on their own.

“MOVA has been a leader in the victims’ rights movement and a resource for victims, advocates and allied professionals since 1984. MOVA is the only organization in the state of Missouri that has been truly dedicated to the rights of crime victims and ensuring implementation of those rights,” Tofall said. “For me, it is rewarding to be a part of an organization that focuses on the awareness of victims’ rights, the ongoing education and professional development of individuals in this field of service, and to make a difference in the lives of the victims and citizens who seek assistance.”

Have you ever been the victim of a crime? Do you know your victim rights?

Seeing the world in another light