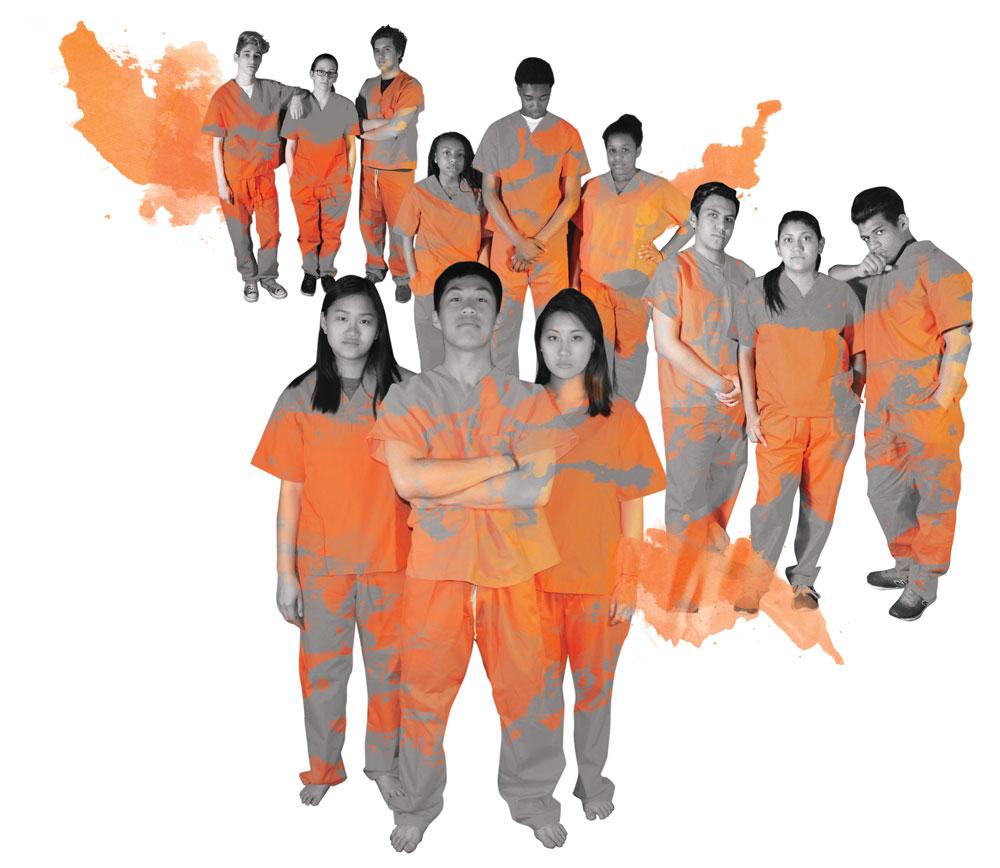 [heading]Fourth in a six-part series covering the criminal justice system[/heading][dropcap style=”flat”]U[/dropcap]p to 10 percent of the nation’s prison population pledges allegiance to a gang of some sort. While this number is accounting for members of established gangs such as the Bloods and the Crips, inside the walls of prisons across the nation a different sort of gang is pervasive in every part of each inmate’s daily life: racial gangs.

LaMarr Mayfield, 19, is a former Jefferson Junior High School student and currently an inmate at the South Central Correctional Center in Licking, Missouri after being convicted of first degree murder for the death of former RBHS student Bryan Rankin Jr.

Mayfield’s center is most populated with black people, followed by white people and Hispanic people. In the maximum-security prison he resides in, people of a certain race mostly talk with and look out for people of the same race, especially if they are a minority in the prison population. Mayfield first noticed this phenomenon at his old prison, Farmington Correctional Center in Farmington, Missouri, where the majority of the inmates were white.

“Black people stuck together because [there] was [a] majority [of] white people there. Basically how I am looking at it is, ‘There are more white people than us. We [are] scared; so let’s stick together and let’s not have no problems with each other,’” Mayfield said. “But, when it is enough of us, f–k each other. It is enough of us now, so I really don’t care for you no more.”

Throughout his time in the prison, Mayfield has encountered racially motivated violence. At one point, he witnessed a group of white people attacking a group of black people simply because one white person had a problem with one black person.

“A dude had got into it with white gang. He had done something to one of their white gang brothers from years back and they ended up finally finding him and they ran up on him and they caught him and they punched him, a couple more punches, pepper spray. It wasn’t nothing major, but it was race on race,” Mayfield said. “Even though I didn’t have nothing to do with it and no other black person had anything to do with it, this white gang still rode together because the white people and the Mexicans stick together.”

He said while black people often question each other on where they grew up and what their allegiances are, white and Hispanic people do not. His speculation of the reasoning behind this practice points to the tendency of black people to generally breaking into smaller groups based on family lines and geography because of the higher black population in prison.

Whites and Hispanics, however, do not have such a large population to draw from, so they tend to stick together and take in newcomers of the same race.

“[They’re] not going to do each other wrong. As far as white f—–g each other over, you ain’t going to find that in here unless it is a snitch, a child molester or a rapist,” Mayfield said. “A Mexican can walk in here right now, never been in the state of Missouri, don’t know nobody, [and] another Mexican [would] find him, and they going to take him in like a brother.”

Dr. Jack McDevitt, the director of Northeastern University’s Institute on Race and Justice, said these sort of racial groupings and violence are common in many dangerous, maximum-security prisons because the inmates seek the safety and the power that comes in numbers.

“Prisoners group together to protect each other, to offer each other someone who’s [going to] protect you if you’re attacked,” Dr. McDevitt said. “Generally those groups are formed by race, so there could be an African American group, a Latino group or a white [group].”

Personal beliefs and biases, however, can contribute to these divisions. Feelings of supremacy can unleash racially charged violence in a new and, ultimately, more harmful and lasting way.

“There is more and more incarceration of people who are members of gangs and so if they are Crip or Blood or Latin king or Disciple or any of those groups here, local gangs or national gangs, then they tend to stay together when they get inside,” Dr. McDevitt said. “Most of these gangs are single race or ethnicity gangs. They tend to find their own and fight for the gang more than the other groups. One of the hardest things prisoners have to deal with is what they call “classification”; when you’re first brought to prison, you have to identify what gangs you might be a part of and other people who want to do you harm and who you might want to do harm to.”

With all the potential for violence that comes with allowing possibly battling races to intermingle in the general population of a prison, some prisons historically have decided to take more proactive approaches and separate prisoners by race to cut down on gang violence.

Of course, civil rights activists mostly decimated these practices, citing the unfairness of segregating a population of people without even knowing that violence would occur between the groups. But some policies stuck around in the shadows.

Corporate lawyer Lloyd Jeglikowski is a Rutgers University graduate. While he attended the Rutgers School of Law in Newark, New Jersey, he served on the staff of the Race and Law Review journal. One case that he covered was the 2005 U.S. Supreme Court case Johnson v. California.

Johnson sued because the correctional system in California had a policy to assign new inmates to rooms with only others of the same race as them for the first six months, but did not segregate common areas.

“During prisoners’ first time through the system, as well as prisoners who were being transferred from one of the state’s facilities to another, they would be subject to the classification policy where their initial cell assignment would be made on the basis of race and would call for racial segregation,” Jeglikowski said. “The whole concern here was that all these gangs in the California prisons were leading to racially motivated violence and the prison said they had a reasonable justification to use these race-based classifications.”

The U.S. Supreme Court struck down this policy, saying prisons “had to apply a higher level of scrutiny” to policies that segregate by race. Jeglikowski sees the merit of both sides: the need to protect inmates and stop racial violence and the unfairness behind sorting each prisoner based on the color of their skin and not their intentions of likelihood to commit a racially motivated crime.

“California was probably wrong to say that, ‘We’re going to do this with all inmates when they first arrive at the prison.’ But at the same time, you need to give the prisons leeway to have some kind of judgement on these matters,” Jeglikowski said. “There are very dangerous prison riots and in California they had one some years ago at a facility called Pelican Bay, where at least one person ended up dead. [That] was a racially motivated riot, so I think in some cases, you’re going to need to have some kind of policy in place that might look like it’s racial segregation but given the circumstances, might be constitutional.”

Dr. McDevitt said many prisons have allowed racial gangs and separation to exist because it is an easy way to manage inmates. If they allow it to happen naturally they aren’t at risk of doing something unconstitutional.

“Most prisons have allowed [prisoners] to group this way. It allows for more control because you can negotiate with the leaders,” Dr. McDevitt said. “There is also less violence. They understand, and they work with them. They perform an informal social control in prisons.”

The question remains; how does the prison system combat violence and segregation? Dr. McDevitt said the answer to this question is just as complex as today’s society. Segregation has occurred for hundreds of years in American history and to this day people feel the effects of this past separation.

“I think that is something that we should continue to make efforts to try to end. But in that kind of environment where everyone is so violent with each other and the violence that takes place there will probably always be a part of the prison life, it’s difficult,” Dr. McDevitt said. “It’s one of those situations where if you go to most college cafeterias you’ll see students group by racial ethnic groups. It happens throughout our society and in prisons as well. However, in prisons it’s dysfunctional and can lead to violence.”

For now the voluntary separation will continue as inmates search for safety and protection, Mayfield said. If he tried to break the status quo, he would be the one getting hurt when a race riot breaks out and he doesn’t have a group to fall into place with and be protected by.

“At the end of the day, it’s a race thing. Mexicans f–k with Mexicans. White f–k with white. Black f–k with black. We’ll mingle, but as far as us really clicking together it is on the edge,” Mayfield said. “If a race riot go down, it’s white versus black, black versus Mexican or Mexican versus white. Even though there are some white people that I ain’t got no problems with and I am not cool with a lot of black people in here, if it is a race riot, I am rocking with my enemy against whatever the race is.”

Do you experience racial division in your daily life?

Even though race shouldn’t be a way to group or separate people, I feel like some people will automatically stick to their own race in unfamiliar situations because they want to be with similar people with similar ways of thinking or similar looks. It gives a sense of security which might or might not be true.