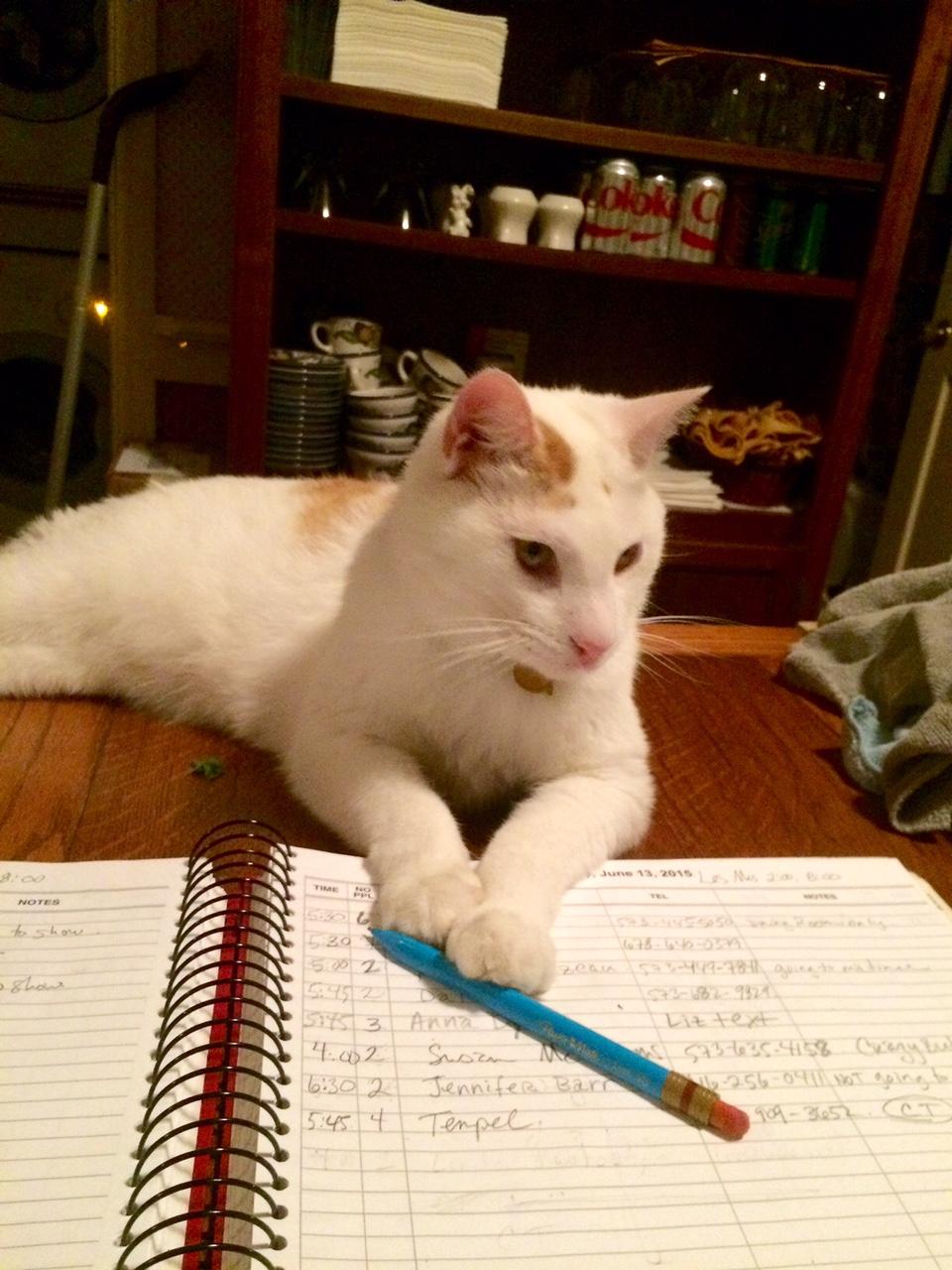 Bingham, a thoughtful white cat with ginger splotches, sits on the steps by the entrance to the Lyceum Theatre in Arrow Rock, Missouri, waiting for someone to notice him. A gold tag shaped like a fish dangles from his collar. He looks relaxed, as if he owns the building – and the rest of the town, for that matter.

“He’s almost like a dog,” said Liz Huff, Bingham’s owner and the chef at Catalpa Restaurant, 510 High St. “People around town don’t even think of him as a cat. People that don’t like cats like him. My husband just never liked cats and he loves Bingham. Bingham goes on walks with the dogs and my husband and I. {Bingham} goes about 10 or 15 feet behind us and just trots along with us all over town or walks with the dogs, and then if we stop, he’ll stop and wait till we start again.”

Every day, when Huff goes to work, Bingham follows. He sits outside on a table on the restaurant’s patio, greeting her customers and leading them to their cars. Sometimes, the door to Catalpa swings open, and Bingham darts inside before anyone can stop him. He quickly sprints to the office, ready to assist his owner.

“He doesn’t like us to take reservations, ‘cause he wants attention,” Huff said. “So he lays on the reservation book and kind of tries to bat your pen away. The girls that are back there in the office love it.”

Catalpa employees try to keep Bingham contained in the office, but he has ways of slipping past them and sneaking into the dining area. Once, he sat on a man’s lap during a meal. While the customer stroked his fur, Bingham helped himself to some food.

Huff was mortified. “Bingham!” she said.

But the man didn’t want Bingham to leave. “No, I like it.”

When Bingham isn’t at the restaurant, he enjoys drinking iced tea, going to the theater and visiting his friends. He also has a part-time job as a tour guide.

Bingham was in front of the post office. It was one of his favorite places to visit in the summer, because many people went in and out, and lots of them would lean down to pet him. The post office was close to the Friends of Arrow Rock headquarters, on the boardwalk.

A group of about 15 teachers was there for a conference. They had to go back and forth between the Friends of Arrow Rock building and the Visitors’ Center, which was on a little bridge.

“I didn’t know any of this was going on,” Huff said. “I was at work, and I had to go to Marshall after work. But I was trying to find {Bingham} ‘cause I didn’t want to leave him out all night, and I couldn’t find him anywhere. Usually, he would be at the restaurant waiting for me, and he wasn’t.”

Huff decided to drive around town to search for Bingham. As she passed the boardwalk, she saw the head of the Friends of Arrow Rock.

“Have you seen Bingham?” Huff asked.

“Yeah, the last time I saw him was about seven o’clock,” the woman replied.

“He had been escorting the teachers from the Friends of Arrow Rock office to the Visitors’ Center, back and forth,” Huff said, “and he’d wait for them, and then walk them back to the boardwalk, and then wait for them and then escort them back over. He had been doing that all day long. And so I thought, ‘Well, if I was Bingham, where would I be right now?’ And so I went to the other end of town and parked my car right across from the bridge going to the Visitors’ Center, and I got out of the car and there he was, sitting right by the door, waiting to escort some people back over, but they had been gone for hours. He thought there still were people in there to walk back, so he was just waiting for them. So I said, ‘Bingham!’ and he came running, and he jumped right in my car, and let me take him home.”

When Huff first got Bingham at the shelter, she worried that no one would choose to take him home. He was the smallest kitten there.

“I used to live in the Virgin Islands, and I adopted two cats there, that were beach rescue cats, and brought them home with me when I moved back here,” Huff said. “Their names were Myrtle and Tig. Tig died about three years ago, and I’ve always had two cats, and I wanted another cat to keep Myrtle company, so I went to the animal shelter in Marshall and picked {Bingham} out. He was so scrawny, and sad-looking, and itty-bitty, and he was thin, and I just felt like he needed some love and needed a good home, so I picked him. I felt like somebody else might not pick him, so that’s why I picked him.”

Today, Bingham is a large, amiable cat, with contacts across Arrow Rock. He makes it his personal business to get to know everyone. When a woman from Kansas City bought a house in town, he went over to meet her. Upon his arrival, he discovered she had a dog that had never seen a cat before.

“Bingham and her dog just kind of became friends,” Huff said. “Bingham sat up on her kitchen island, and the dog would jump up and Bingham would bat [at her], and they played like that. It got really late, and I was working, and Karen tried to walk Bingham home. I didn’t have a cat door then, and so they couldn’t get in. He followed Karen back, and actually spent the night at her house, and then wanted to go home about 5 in the morning. I didn’t {know where he was} but she called me and said, ‘I have your cat, and he’s fine, but he’s having a sleepover.’ I said, ‘OK, that’s fine! Tell him I’ll see him in the morning!’”

Bingham likes to be in the middle of things, and he makes sure to participate when people are having a celebration. He even went trick-or-treating at two houses last year.

“They had kids knocking at the door and then they opened their door, and Bingham just walked right in,” Huff said. “He just walks in people’s houses and looks around and hangs out on the couch or whatever, and then just gets up and leaves. He sits at the door and waits to be let out. It’s very funny. He does it to like three different people in town.”

Well, did Bingham get any candy on Halloween?

“I tried to give him some candy one time, and he didn’t like it,” Huff said. “He spit it out. But he likes iced tea. He’d rather have iced tea than water because we’ll have water out for him on the back porch, and he’ll always drink somebody’s tea.”

Bingham is a very social cat. When there’s a show going on at the Lyceum Theatre, he somehow knows when intermission is about to begin, and he goes over and lays on the steps, waiting for people to come outside and pet him.

“Everybody in town calls him the Ambassador,” Huff said. “He’s like the mayor. I think he’d do a good job {if he was elected}.”

He also joined the Easter parade once, just on his own. Huff wasn’t in Arrow Rock at the time, and when she got back, everyone was telling her that her cat was in the parade. He had randomly chosen to enter, and had walked along the parade route with everyone else.

“People say I shouldn’t let him out ‘cause he runs all over town and with the theater, people in the cars, and everything, he could get hit,” Huff said. “I think with a cat like Bingham, I don’t want to lock him up, ‘cause he’s not in jail. If he wants to be outside, then he should be outside. He’s pretty safe, although when it’s sunny, he lays in the intersection by my house, right in the middle of the intersection, and these people drive around him. Everybody likes him.”

Books are more than stamped words on a page

Oh, say, can you see