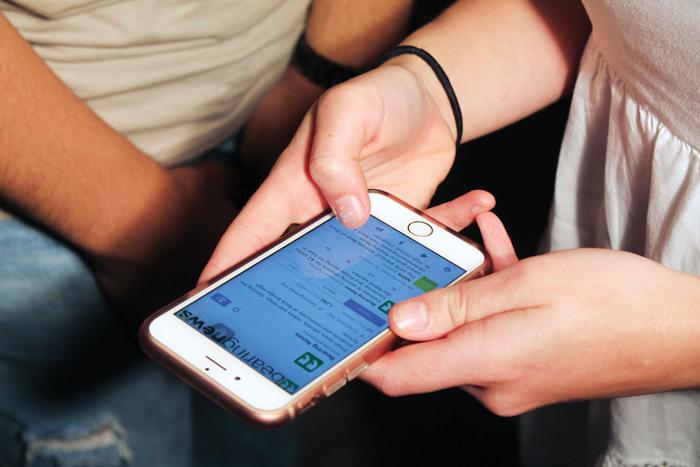 As members of a generation glued to phones and technology, RBHS students typically spend more time updating their Twitter feeds than their history notes. As a result, administrators and Columbia Public School (CPS) technicians have attempted to block access to certain websites and apps.

“Columbia Public Schools is required by the federal government to filter our Internet access,” Director of Technology Services Dr. Chris Diggs, said. “Both teachers and students have the same categories filtered as required by” the Children’s Internet Protection Act.

CIPA requires that internet filters must materials that is obscene, contains child pornography or is harmful to minors. Students such as sophomore Henry Wilson, however, while understanding the reason for the block, feel that it oversteps its bounds.

In addition to the CIPA restrictions, CPS adds its own filtering policies.

The District Technology Committee is made up of teachers from each school, parents, community members and is headed by the Coordinator of Instructional Technology, Julie Nichols.

The committee implemented a recent change to the filter, giving certain students the ability to use Twitter, an app and website that was banned at RBHS for much of the school year. According to Diggs, because Superintendent Peter Stiepleman and many teachers use the website to communicate with high school students, the restriction was lifted.

“With these [age-based] policies we allow high school students to access Twitter but we do not allow the other groups of students to do so,” Diggs explained.

While most students are content with the ability to use Twitter on school grounds, some teachers, because of the educational benefits, also think that it is a move in the right direction.

“When I taught a certain piece of literature, [Twitter] was how I had students communicate with me about it both inside and outside of school,” AP Language teacher Katherine Sasser said. “So, from a teacher’s perspective, I do see the benefits of using twitter in your classroom and think that it should be acceptable.”

There are, however, some websites and apps that teachers such as Sasser are able to use, while students are still restricted.

Some students, however, feel students should receive the same privileges as teachers in terms of internet accessibility.

“I think [the district] is too strict sometimes when it comes to our wifi,” Wilson said. “This school was based on freedom with responsibility, and if we show that we don’t deserve that responsibility, maybe the freedom should be taken away, but until that happens, we deserve some freedom on the internet.”

Wilson explained that for most students, there are only a handful of applications and social media sites that are accessed anyway.

Sasser agrees that students should be able to access certain internet material, as long as it is for educational purposes. But, she said the primary reason for allowing students to use certain internet websites and applications is to promote responsibility and educate students about technological use.

“There are two parts to [the topic of filtering websites]: Trusting students with decision making and . . . making sure our devices are functional for the ways that they should operate in the classroom,” Sasser said. “Students can use [technology] in a way that isn’t frustrating and that might actually help diminish the idea that devices are used inappropriately.”