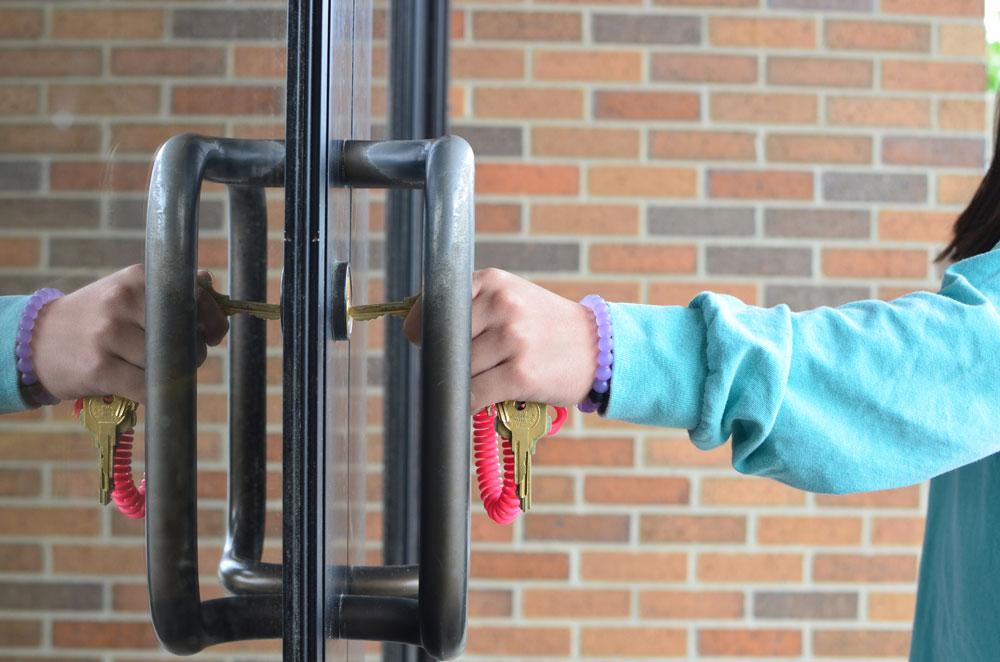 It’s 6 a.m, and freshman Ariana Hughes is already at school.  As a swimmer, she’s at Hickman with the rest of the Bruins, Kewpies and Spartans who are all gathered at the pool for a two-hour practice.

Most other students are at home tucked under covers, while Hughes and the rest of her team are putting their swim caps and goggles on.  The first bell won’t ring until 8:50 a.m., which is three hours away, yet many students are here long before the actual school day begins.

“I like morning practices in the sense that we’ll be done with our workout before any students even get to school,” Hughes said.  “It’s like the school day hasn’t started, but there are still lots of people.”

Back at RB, zero hour is just about to start for students willing to come early and get in an extra hour of learning.

“My zero hour class in Geospatial Technology over at the Career Center, so I get to school at 7:50 a.m. every single day,” senior Devesh Kumar said. “When I get here the school is pretty empty. It’s kind of weird being in the school that early because there are a lot less people compared to the regular school hours.”

An hour passes, and when the bell rings, the school has suddenly filled with students.  As they walk to their classes, the hallways are filled with the chattering of voices.

“The hallways give you a chance to pass by old and new friends that you may not get to see outside of your daily classes,” junior Aliyah Blackburn said.  “The flow of people moving around in the hills makes me realize the different types of people that exist at RB.  By seeing everyone I know make their way around the school, it makes the school feel alive.”

First period passes and the bell rings, letting students know that it’s lunch time. Students stream out of their classrooms and find a spot around the school to eat.

For freshman Lily Abraham, she usually sits in the north commons where it’s sometimes loud and crowded but gives it the classic school lunch feel.  Many other students leave the school grounds; going out for lunch and bringing in smells of fast food into the building.  Even with students coming in and out, the building is still alive amidst the chatters that span across the two floored school.

Then  it’s back to work with students filled in each classroom.  Many of the rooms are filled, and the school is wide awake.  Students say the classrooms are jam packed with a sense of hard work buzzing through the air.

“It’s a stressed, yet chill atmosphere,” freshman Jillian Barnett said.  “It’s both, and there’s not really a way to describe it because there’s always so much going on during the day.”

Seven hours later, in fourth period, students await the last bell when they are free to leave.  There are the occasional clock glances, checking to see when they’ll be allowed to leave the school grounds.

But the school doesn’t sleep after the last bell.  It takes hours for the school to be empty, and even then, the lights remain on, and the clocks ticking away.

After that last bell, most students are eager to run out the doors, glad to be finished with another school day.  The doors open and close hundreds of times while everyone trickles out.  But with after school athletics and clubs, many students are still on school grounds even after the bell.

“After school it’s more calm and everyone just does whatever they are supposed to do whether it’s a sport or club,” freshman Emily Litton said.  “It’s like hanging out with people outside of school but you’re still at school so you get the benefit of meeting new people.”

As for senior Stephanie Kang, late nights for journalism take up almost the whole night in order to finish editing and putting together the final draft of the school newspaper, The Rock.

“Late nights usually last till 11, but there are times when it will end a little later,” Kang said.  “Sometimes it can get scary when you’re walking down an empty, dark hallway by yourself.  It can also be really relaxing working after school since it’s quiet, unlike regular school hours when everyone is running around.”

Even after every student and teacher has left, the school still seems to be awake, the sound of the air conditioning buzzing through the hallways. Maybe the school does sleep a little, when the halls are empty, dead silent, and it waits a few hours before the doors open and student’s pile in for another day.

“I think the school does sleep, but it just sleeps late,” Kang said.  “It’s awake with activity from the time the janitors open the doors to when the last person leaves, and that could be really late at night.  It’s probably only completely quiet for a couple hours before students and teachers fill the halls all over again.”

Yoga works to connect the mind with the body