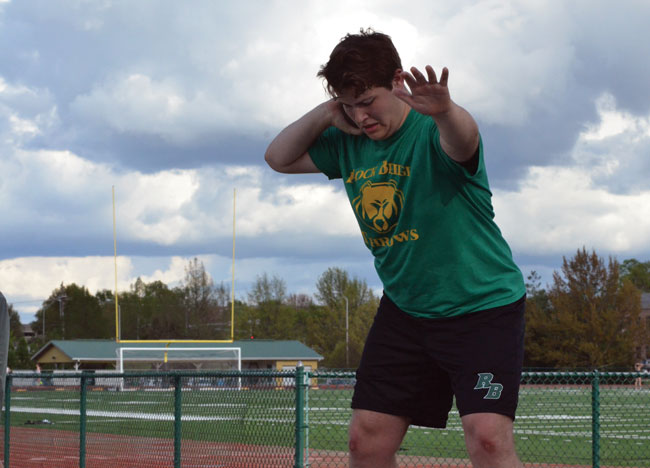 Push it: Junior thrower Ben Lopez begins his load before throwing a shot put at practice in preparation for the track’s district tournament.

While some athletes complain of shin splints, soreness and the daily trips to the training room for ice baths, the top runners of RBHS are beginning to peak. With personal records set weekly and seconds shaved off of each lap, the top athletes are just starting to see the results from a season’s worth of training. In fewer than three weeks, the best of the Bruins will be tying their spikes for the Class 5, District 6 meet held in Russellville, Missouri on Saturday.

“Even though we have one of the most difficult districts in Missouri, I’m confident our boys and girls will both be in the top three,” junior distance runner Aliyah Blackburn said. “Districts, especially in our specific district, has some of the best runners in Missouri, so it’s already a pretty tough meet. Not only that, but there’s the thought of your season ending if you don’t move on to sectionals.”
With the smallest of factors potentially affecting the spot to sectionals, athletes can’t help but be nervous when they know they could be competing for the last time.

“It’s sad because your career is almost over but also exciting because you’ve been training for the entire season or for several years at this moment,” senior distance runner Quinn Miller said. “It’s also pretty nerve-racking just because you want to do your absolute best so that you can move on to the next round and end on a positive note.”
Beyond performing well as individuals, RBHS athletes know each point counts for the team competition.
“Overall, we are always looking to win the district meet. The landscape of Missouri track and field has really changed over the last few years with the addition of five classes,” jumps coach Patrick Sasser said. “From top to bottom, we have someone capable to get out of districts in every event. As a coaching staff, we are excited to see the way things shake out with different relays and individuals.”

After every event, standings are determined by tallying each school’s points. The top eight athletes in each event receive points. The winner of the event gets 10 points; from there, the athletes receive eight, six, five, four, three, two or one point depending on how they finish. Ultimately, at the end of the meet, the team with the highest score wins or is the district champion.

“Districts is a meet that you have to do well to move on. That makes it seem more stressful, but I try to remember to do my best like I would do at any other meet,” junior distance runner Rebecca Rubinstein said. “Many of our relay teams have broken school records this year, and we also have a number of vaulters, jumpers, hurdlers and runners, who can all score points.”

As the date approaches, the nerves and excitement settle in. Senior Faramola Shonekan, however, knows the drill.

“I feel more prepared this year because every year I get wiser when it comes to postseason and the particular races that I run,” Shonekan, a mid-distance runner, said. “We’ve done consistently well so far, and I don’t think our performance will be any different. We have to stay calm and not get too overwhelmed with the upcoming pressure and competition.”

While Shonekan represents leadership to the team, some underclassmen will get their first taste of competition for a district title.

“It’s a little unlikely that I’ll qualify for districts this season, but the possibility of being a part of the team that RBHS always sends to districts is exciting in itself,” freshman vaulter Emily Litton said. “As a freshman, I’ve never been to a high school district meet, but I know we have some people on our team that could definitely advance to the next level of competition.”

Ultimately, it comes down to preparation. Districts represents an accumulation of hard work and dedication throughout the entirety of the season.

“The work’s been done. The biggest thing going into postseason is making sure they’re in a good place mentally,” sprint coach Lauren Flaker said. “That’s half the battle in track making sure you’re mentally in the race.”

Trying to fit in