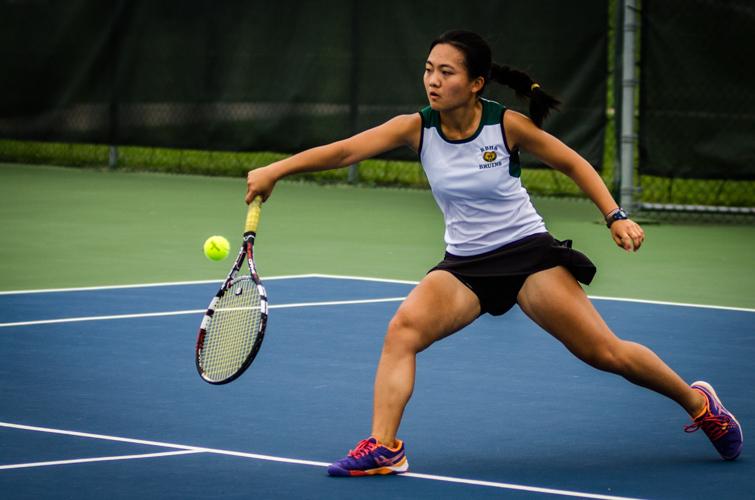 Senior Lisa Zhuang returns the serve in a match at the Columbia Tournament Sept. 17 at Bethel Park. After being crowned the victors of the district tournament Sept. 28, the Lady Bruins hope to continue their success in the sectional tournament beginning Oct. 4. Photo by Yousuf El-Jayyousi

The girls’ tennis team is no stranger to holding the district title. Yesterday, Sept. 28, the team claimed its 18th consecutive district championship after beating the Hannibal Pirates 5-0 Sept. 27 and the Troy Buchanan Trojans 5-0 Sept. 28.

Dudley attributed the team’s success on the court to concentrating on winning one game at a time.

“We prepared for districts just like any other match. We practiced hard, focusing on improving our weaknesses and building our strengths,” she said. “…our matches were fairly easy, but we still had to try hard to maintain focus and support our teammates to make sure that we got the win.”

While the team has kept their eyes locked on the state championship title, Fay holds the same philosophy as Dudley.

“We would love to win it for a third consecutive year,” Fay said. “Winning is always great, but we as a team like to embrace the journey together and focus more on improving ourselves along the way, rather than just focusing on an outcome goal.”

Fay and the rest of the Lady Bruins cannot disregard the importance of the upcoming matches, however, with the sectionals tournament on the horizon next week.

“Everyone always practices with a little more intensity leading up to sectionals,” Fay said. “We play a lot of games and tiebreakers against each other to simulate a real match, and just generally help each other to get better.”

Loeb agrees with Fay, stating that their camaraderie and improvement has been the key to their success. While the postseason has been smooth sailing thus far, Loeb warns of choppy waves soon approaching.

“Right now, we are on the yellow brick road marching merrily along, but before it’s all over, we will have to deal with the wicked witch,” Loeb said. “We will have to win a very tough dual meet against a very good team. There will be no click your heels three times and say ‘I hope we can win; I hope we can win.’  We will need to have a very competitive mindset. I believe we will take that [mindset] with us.”

Do you think the Lady Bruins will enjoy similar success in the upcoming sectional tournament? Comment your thoughts below!