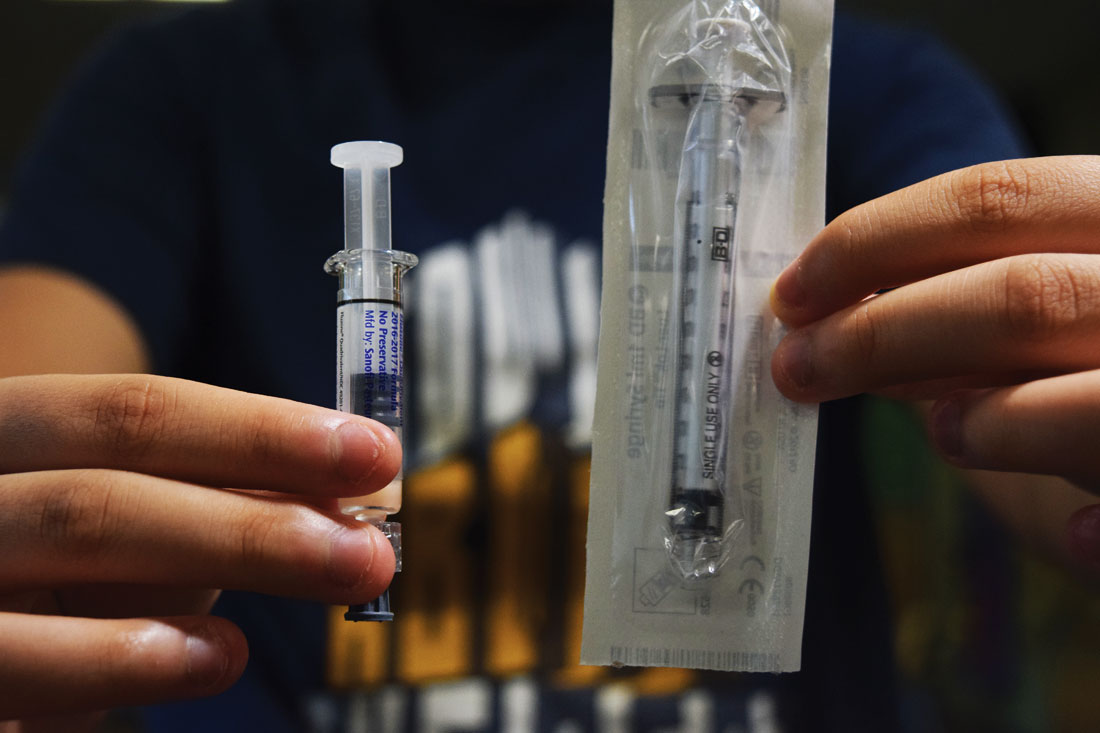 The sharp smell of antiseptic wipes fills students’ noses as they stand in line waiting to get vaccinated at school. Some are nervous, unsure if the needle will be painful or pain free, while others chit chat with their friends excited to be out of class.

The two options of vaccination used to be by shot or by nasal spray.  The flu mist, or spray, was approved by the FDA in 2003. The flu mist is unavailable to some individuals with certain medical issues like asthma, kids younger than two, people older than 50 and certain allergies to any ingredient in the vaccine. Despite the limitations on who can get it, the flu mist has been the popular choice compared to the shot with one third of all vaccines given to kids being the mist, according to the Centers for Disease Control and Prevention.

Sophomore Maddi Butler has a mild form of asthma, but she still prefers the flu mist because of her fear of needles.

“I switched to the mist as soon as it became an option,” Butler said. “It made me okay with getting vaccinated because before I always hated it because of the shot.”

Earlier this summer on June 22, the CDCs recommended that for the 2016-2017 flu season, people should not get the flu mist. According to the CDCs, the live attenuated influenza vaccine or LAIV, is not effective.

The study by the CDCs during the 2015-2016 flu season showed that for people ages two through 17, the LAIV was only effective with three percent of participants. This finding means there is no protective benefit from the LAIV; In contrast, the flu shot, also known as the IIV,  was effective in 63 percent of the people participating in the study.

For students who prefer the shot rather that the nasal spray, the CDC‘s new statement doesn’t affect them at all.

“It’s easier [to get the shot] and I like to get it over with,” sophomore Piper Page said. “I don’t really have a problem with it. I’m just not afraid of shots and I prefer them.”

While Page has a non-existent fear of shots, it is not the same for Butler.  Even though the mist is no longer available, Butler’s fear of shots won’t stop her from getting the flu vaccine.

Some people don’t have a choice whether they get vaccinated or not. This was the case for sophomore Emily Litton, who always got vaccinated because her mother didn’t want her to get sick.

“I usually get the flu mist, but I’ll still get vaccinated because my mom will make me,” Litton said. “Even if I had a choice I would get the vaccine because I hate being sick,”

According to the CDCs, while teenagers are not the most susceptible to the flu like children under the age of five, pregnant women and adults over the age of 65, it’s still important for them to get vaccinated.

The CDC states that, even though most preteens and teens recover within a couple of weeks from the flu, certain people will recover much more slowly because of sinus infections or pneumonia. Preteens and teens that suffer from chronic health issues like Type 1 or 2 diabetes have a higher risk for complications from the flu, but even healthy teenagers can get seriously sick from the flu.  For those reasons, the CDCs recommends that everyone six months and older gets vaccinated.

Every year RBHS gives free vaccinations to any students who wants it. However, because of the CDC’s recent announcement about the flu mist, the school health department is changing how they are giving out the vaccine to students this year.

“Right before schedule pick up, or right during schedule pick up, the CDC came out with a new statement with the efficacy on the flu mist,”  School nurse Tammy Adkins said. “[Now,] the health department is no longer doing flu mist in our school base clinics,”

The poll concluded that those individuals didn’t get vaccinated because they worried about side effects, were concerned about getting sick from the vaccine and thought that the vaccine was unnecessary and ineffective.

Freshman Leslie Barner shares a similar mindset regarding vaccines to those in the study. She doesn’t get vaccinated because she doesn’t believe it is needed and doesn’t want to get the flu.

“I have never gotten the flu shot before,” Barner said. “I have only gotten the flu maybe once in my life so I just never thought I would need to get the shot.”

In accordance with the CDCs, the influenza virus changes and mutates regularly each flu season, so people’s immune systems no longer recognize the new version of the virus as the flu. This leads to doctors having to come up with a new vaccine each year —  one reason pro-vaccine individuals believe it’s necessary for people to get vaccinated each year.

As stated by WebMD’s Cold, Flu, and Cough Health Center, in the U.S. five to 20 percent of the population will get sick from the flu every year. The number of people that will be hospitalized because of the flu-related issues is 200,000. The average amount of people that will die from flu-related causes is 3,000 to 49,000 on average.

“People got vaccinated before the flu mist came out so I think people would go back to the shot, but maybe less people would get vaccinated because they just think they won’t get sick,” Litton said. “I think some people will just be like ‘Well, I don’t want to get the shot and I don’t think I’ll get sick.’”