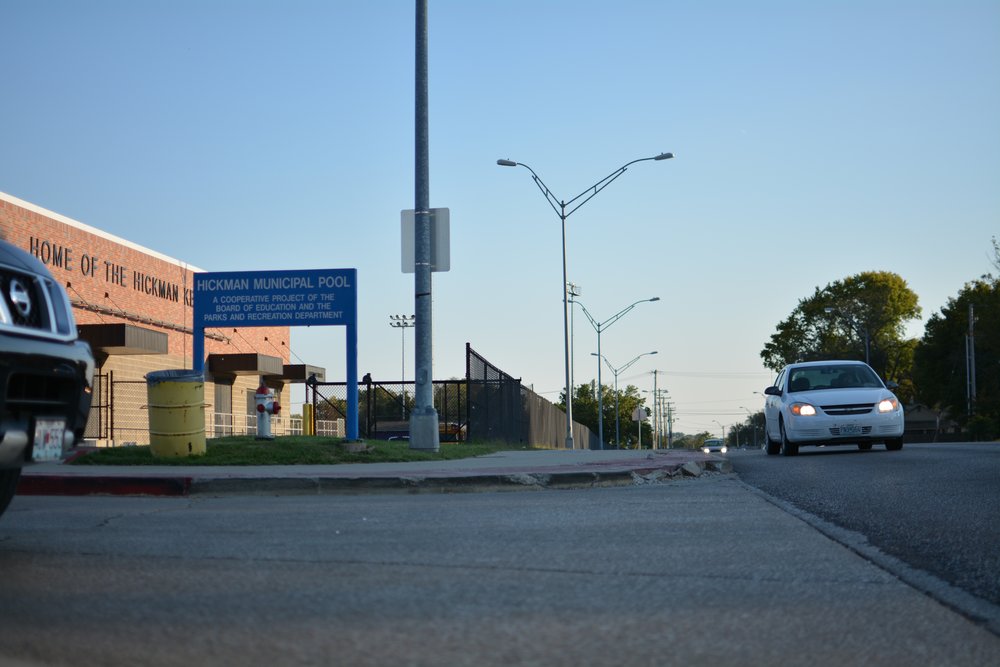 Walking from home to RBHS would take 14,000 steps and two and a half hours for junior Alex Sovanski. If Sovanski attended Hickman High School, the walk would be only 4,000 steps and less than an hour.

Though Sovanski has no intention of walking either route, in order to get to RBHS she goes by Hickman High School and continues for another five miles until she gets to RBHS. The high school boundaries that were implemented with the opening of Battle High School in 2013 separated neighborhoods from the schools that lay closest to them in an effort to accommodate middle schools boundaries and balance attendance at the high schools. This is the case for Sovanski, who lives farther from RBHS than most students and has a longer bus ride.

“The drive is usually about 30 minutes depending on traffic,” Sovanski said. “I live about five minutes north of Hickman and less than 15 minutes west of Battle.”
The way the school boundaries are laid out means that students who live closer to other high schools could be forced into the RBHS districts. In Sovanski’s view, the geographically inconvenient school boundaries take away opportunities for students to get involved in activities and extracurriculars.

Assistant Principal Dr. Lisa Nieuwenhuizen believes lack of transportation is a factor in students not having access to tutoring, clubs or athletics.

“I don’t think we can change where people live, but I do think the schools should take steps to be much more inclusive of these populations so that those students have equal access to the opportunities that clubs and athletics provide for pro-social activities,” Dr. Nieuwenhuizen said. “By removing structural barriers like transportation, we would provide a more equitable approach for clubs, sports, and activities.”

Not only do the boundaries make it hard for students to be involved in multiple activities, but the longer bus rides take time away from students’ time outside of school as well. Sovanski wakes up earlier on the days that she rides the bus and if she lived closer to school, she would be able to sleep in another 45 minutes.

“I don’t get home until 5 p.m. It really affects how much sleep I get because I have to go to bed a lot earlier than others and wake up 45 minutes early on days that I ride the bus,” Sovanski said. “Getting home at 5 p.m. definitely does not help with the amount of time I have to do homework.”

The distance also separates students from participating in activities or playing sports by making it harder to get rides to and from school when the bus service isn’t available. According to Columbia Public Schools (CPS) Transportation Coordinator Blake Tekotte, there are 196 RBHS students that live in the north or central part of town. Middle schools provide activity buses which take students home later in the afternoon so students are able to stay for activities without transportation problems. RBHS does not offer activity buses, but Dr. Nieuwenhuizen continues to advocate for them, having first brought up the question 10 years ago.

“There is an idea that high school students drive, thus no need for an activity bus or that the bus wouldn’t really be used,” Dr. Nieuwenhuizen said. “The other issue is that there is currently no funding for an activity bus. So even if we could arrange one, we would have to find a way to pay for it.”

Sovanski agrees that RBHS should provide an activity bus. She believes the bus would allow her to be more involved in extracurriculars.

“I live in a single parent home and sometimes there isn’t enough time to come and get me and take me to things all the time,” Sovanski said.

The inconvenient school boundaries are not unwarranted, though. When redrawing district boundaries in 2012, the committee considered numerous factors for the disproportionate lines.

“Several years ago there was a study done by an outside agency to draw the boundary lines and make recommendations to balance the diversity across the district,” Dr. Nieuwenhuizen said. “While the intent was a good idea, consideration to the actual impact on those families was not given.”

Coordinating 21 elementary schools, six middle schools, four high schools and trying to make everyone happy while doing so is not an easy task. CPS Board of Education member Christine King participated in the decisions regarding high school boundaries. King said redrawing the boundaries involved parents, community members and administration considering different options and carefully trying to choose the best choice for CPS.

“At the end of the process, after the committee looked at hundreds of scenarios and the true data of students who live in our district, they decided it was best that once students were in middle school, they follow their middle school to high school,” King said. “The decision was to have two middle schools feed into each high school.”

According to CPS’ district data, more than 18,000 students attend CPS this school year. King said no solution can make every student or parent in the district content. After analyzing all the options, CPS chose what they thought was best for students from kindergarten to graduation.

“Inconvenience is [subjective] to every family. What is an inconvenience to one family may not be to someone else,” King said. “We do try, at the school level, to work with the needs of all our students.”

The committee made the choices and the district lines were finalized. Dr. Nieuwenhuizen said students always have the power to make a change in CPS. Perhaps in the future if students get involved in the issue, RBHS will have an activity bus that will provide students like Sovanski the opportunities to be more involved within the school.

“If there is an active group of students and parents who voice their concerns about this structural barrier … to the central office and the school board, perhaps the district might consider changing it,” Dr. Nieuwenhuizen said. “We know that research shows that student involvement in extracurricular activities increases academic success and graduation rates. It seems like a no-brainer and money well spent.”

We are currently fighting a zoning battle in our area. Cassidy, do you have any research articles showing the effect of distance from the school having a negative effect on student participation in extra curricluar activities?

The thing I like about this article is that it’s pretty blunt about what the issue is, but it still shows that people in CPS/RBHS administration are doing all that’s necessary to try and fix the border problems. Also, I LOVED the hook. The thing about the steps was so interesting to me. Loved it!