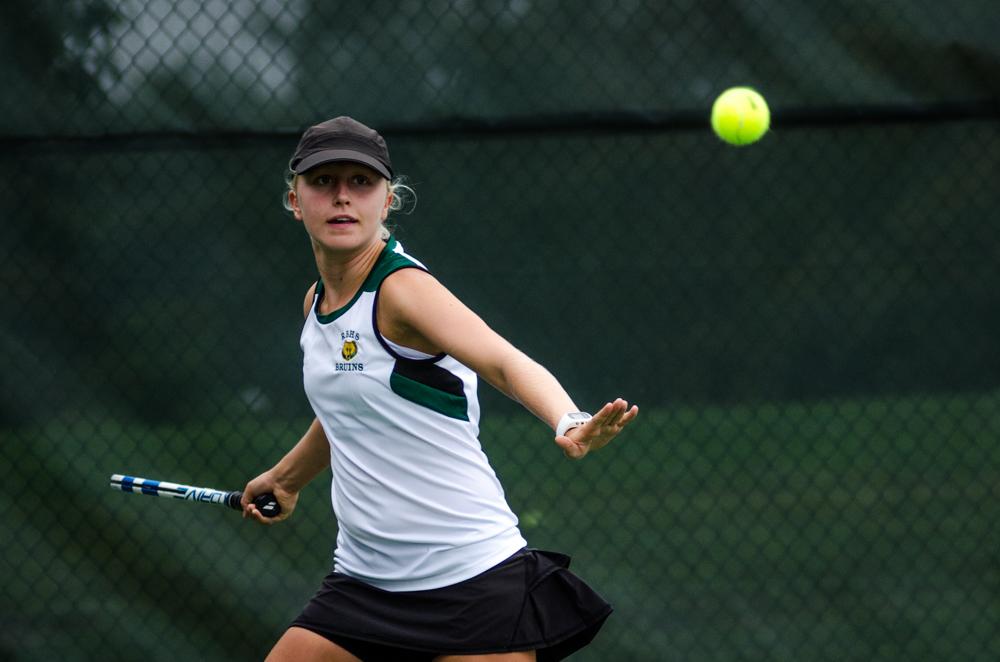 Ready for Anything: Junior Katherine Dudley returns the serve in a match at the Columbia Tournament Sept. 17 at Bethel Park. The Lady Bruins secured their third consecutive state title Oct. 13, establishing their dynastic dominance in the lore of RBHS sports. Photo by Yousuf El-Jayyousi

The girls’ tennis team triumphed against Liberty High School this afternoon in St. Louis, routing the Eagles 5-0 in the team sectionals competition and marking the end of the sectional tournament in its whole.

The Bruin’s exceptional performance secured them a spot in the state championship tournament, taking place Oct. 13.

“Today’s win was very exciting for everyone on the team. It is really exciting to be going back to the state tournament,” junior Katherine Dudley said. The team achieved today’s win with the hard work and dedication put in by our players and our coaches.”

In the singles matches, the Lady Bruins played just as strong as they did in the doubles matches. Wright won 6-1 and 6-1, While Fay beat her opponent 6-0 and 6-1.  The singles matches played by Dudley, Farid, Hose and Hoffman were ended early because of Fay’s win. Fay won the last match needed for the team to win the sectionals tournament.

The Missouri State High School Activities Association Team Championship (MSHSAA) will be Oct. 13 at the Cooper Tennis Center in Springfield. Following the team championship are the individual championships, which is Oct. 14 and 15. Despite an exceptional performance in sectionals, the team expects to continue working hard and sharpening their skills for state, which the team hopes to win for the third consecutive year.

“There are always improvements to be made, Dudley said. “We each have individual and team objectives that we are working on together to help achieve our goals. At state, we need to keep playing with high intensity and focus.”

Will the Lady Bruins conquer their third straight state championship this season? Comment your predictions in the comments below!