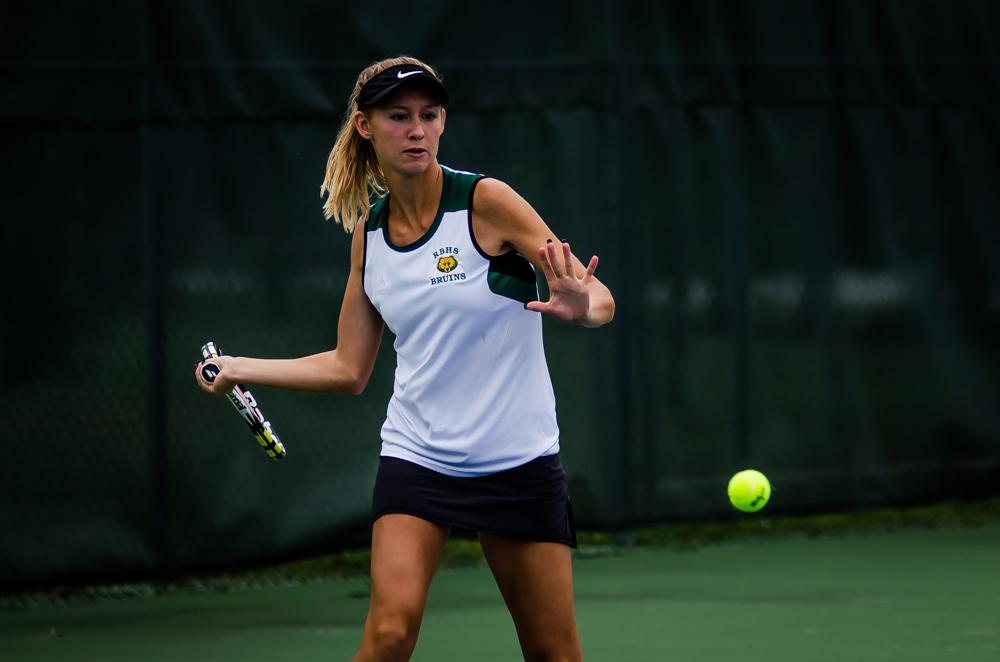 Junior Faith Wright returns the serve in a match at the Columbia Tournament Sept. 17 at Bethel Park. The Lady Bruins were able to successfully secure their third consecutive state title on Oct. 13, establishing their dynastic dominance in the lore of RBHS sports. Photo by Yousuf El-Jayyousi

Around 2 p.m. Oct. 13, the girls’ tennis team took on Lee’s Summit West in the MSHSAA Class 2 state championship with a clear goal to leave Springfield as the state winners. Two hours later, they got exactly that, winning their third consecutive state title since 1984. The three-peat is the fifth in the last seven years and the 11th in RBHS history.

The first match played against Parkway Central was the most nerve-wracking, in the eyes of freshman Mary Hose. The Lady Bruins were able to pull through, however, beating them 5-0 and winning all three doubles matches and two singles matches. The match against Lee’s Summit West followed and yielded the same victorious results. With these wins under their belt, the girls wrapped up their season in glamorous fashion.

“I feel like it brought us closer to have made history by winning three times in a row and just in general by wrapping the season up with such an exciting win,” Hose said.

The tougher match, however, was the semifinal, Head Coach Ben Loeb said. Parkway Central’s team is tough competition to RBHS, as they also fought for their place in the semifinals by winning districts against Marquette, Lafayette and St. Joseph.

‘We knew we would have to play all out in that dual,” Loeb said. “In essence, the semi was the final.”

As a team, hard matches were bumps glided over by the girls’ hard work. With more than 20 games in their season and rigorous practice Monday through Friday, the amount of work the team puts into the sport is intense.

“The girls and I worked hard to take the pressure as a privilege and play with intensity to get the outcome we wanted,” Hose said.

Along with this, winning the state title was just a figurehead to how talented and hardworking the athletes are. As the saying goes, “Success does not lie in results, but in efforts.” In this case, RBHS showed how efforts and results can go hand in hand.

“It’s very gratifying to win the state title and know the hard work has paid off,” Loeb said.

WIth the season coming to a close, the win was a the last to a very successful season and an even more successful day.The team achieved the hard-fought state title with a combination of grit and teamwork.

“We had a team commitment,” Loeb said. “We needed that to get to where we are today; state champions again.”

What was your reaction to the Lady Bruins’ historic three-peat? Feel free to explain in the comments below!

Resting in the chaos