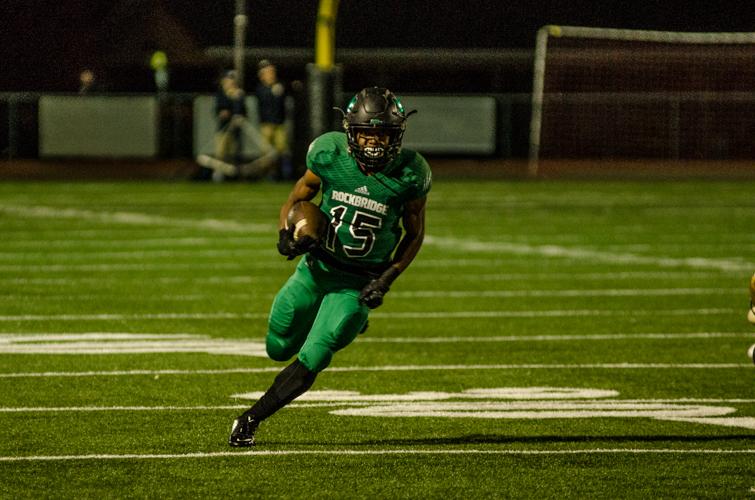 Sophomore running back Nate Peat (15) sprints to score a touchdown at the homecoming game against the Helias Catholic Crusaders on Sept. 30. The Bruins fell to St. Louis University High (SLUH) in a lopsided 45-7 blowout loss on Oct. 8, the sixth of the season for RBHS. Photo by Yousuf El-Jayyousi

One could say it has been a tough year for the RBHS football team. With a roster filled with young and inexperienced talent, the Bruins have had significant difficulty against their adversaries this season.

Despite clinching a fiery victory in their previous game against the Helias Crusaders, the team was unable to continue their winning ways against St. Louis University High (SLUH), who trounced RBHS with a final score of 45-7 on the evening of Oct. 8.

Before the kickoff senior safety Luke Bley said the team was feeling confident coming off of their previous win against the Crusaders.

“Coming off the win against Helias, we had a focused week of practice with great energy all week, so we felt really good going into the game,” Bley said. “We thought that this was one that we could win.”

The complete opposite, however, turned out to be the case. After the game was underway, SLUH scored the first points in the form of a touchdown with 8:03 left in the first quarter. From there, the Billikens continued to establish their offensive dominance on the field, all while keeping RBHS scoreless for the entirety of the first half.

Even though it was becoming more and more apparent that RBHS was in for another blowout loss, junior tight end Matt Hall said the team’s morale remained high.

“We had some defensive stops and a few big plays on offense, and were in the process of getting things rolling and modifying our game plan,” Hall said. “We were not worried about the score because we have fought all season and we knew that was exactly what we would have to do.”

In the third quarter, SLUH scored a total of two touchdowns before the Bruins would put up their first and final points on the scoreboard. A crisp throw from sophomore quarterback Marcus Manuel resulted in a 23-yard touchdown by Hall; it was a vibrant moment for RBHS in an otherwise dreary matchup.

“When I scored I felt proud because if it weren’t for my teammates, I wouldn’t have gotten that opportunity. God blessed me with the opportunity and health to play football and I am happy I was able to help my team,” Hall said. “I love every moment on the field with my team, especially moments like those, regardless of the score.”

While the Bruins saw Hall’s touchdown as an opportunity to revitalize the team, SLUH quickly responded with yet another touchdown, evening out the score 38-7. They would score one more in the fourth to secure a 45-7 thrashing of Rock Bridge.

“I’m not really sure what made them so effective on defense, but I know on offense they had great [running] backs who were fast and ran hard, and we really struggled getting them to the ground in the second half,” Bley said.

Despite the loss, the sixth of the season for RBHS, Hall believes the team will use it as an opportunity to improve for their next game at home vs. Francis Howell. That game will mark the senior night for the Bruins and will their final regular season matchup before district play begins Oct. 21.

“It was a tough loss, we definitely expected to do better this week, but we did see good things as well as things we need to fix,” Hall said. “This game was a reminder that nothing comes easy in Class 6 football and that we need to strap up and really work this week so we can come back to Columbia and bring home a win on senior night.”

Will you attend the team’s final regular season game at home vs. Francis Howell? Let us know in the comments below!